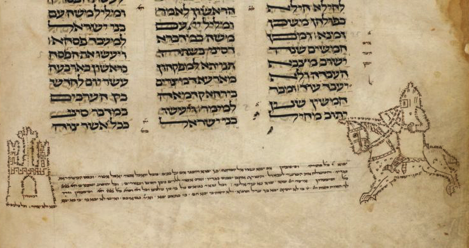 The Yonah Pentateuch is an elaborately decorated Jewish medieval manuscripts from northern Europe, using the art form of micrography.

Micrography are images that you can read. 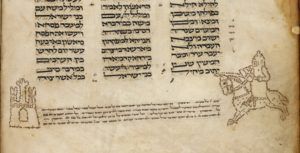 The Pentateuch is the most important collection of books in Judaism. The word “pentateuch” derives from the Greek word for the number five—penta—and is used when referring to the five books of the Torah. These five books are also known by their Greek-derived individual names, namely Genesis, Exodus, Leviticus, Numbers, and Deuteronomy.

The Torah lies at the foundation of Judaism, and it is therefore easy to understand why the Pentateuch over time has become an object of great book art, especially expressed through the art form of micrography.

Micrography consists of page decorations that you can read. Micrography is written in minuscule script, often in Aramaic rather than Hebrew, creating elaborate patterns in the margins of Judaic books.

Micrography initially developed as a way to add commentary on how to correctly pronounce the Biblical Hebrew. Because Judaism, like Islam, does not allow religious imagery, over time micrography developed into an art form of its own, using various sections of the Bible as page decorations, most often the Book of Psalms.

Micrography as an art form is unique to Judaism and developed in Egypt and Palestine during late-Antiquity. During the course of the Middle Ages, micrography became an exquisite art form shared by Jewish communities all over the diaspora, from Yemen to Sepharad (Spain and Portugal) and Ashkenaz (Germany and France).

One of the most elaborate examples of micrography from medieval Ashkenaz is the Yonah Pentateuch.

Here are ten things you need to know about the Yonah Pentateuch. 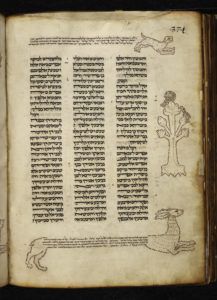 1) The Yonah Pentateuch was made in either Germany or France, and has been dated to either the second half of the thirteenth century or the fourteenth century.

2) The Yonah Pentateuch is a codex, i.e. a book with pages bound together in a spine, as opposed to a scroll, which is the most common format for a Torah.

3) The Yonah Pentateuch consists of 329 parchment folios organized into 35 quires.

5) The Yonah Pentateuch is written in Hebrew and Aramaic, using the Ashkenazi type of Hebrew script.

6) The scribe who wrote the Yonah Pentateuch has been identified as a man named Baruch. It is not known who commissioned it. 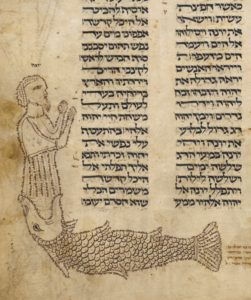 7) The Yonah Pentateuch gets its name from the micrographical depictions of two scenes from the Book of Jonah. One scene is Jonah in the mouth of the fish, and the other scene is Jonah sitting underneath a tree.

8) The Yonah Pentateuch is also known as the Pentateuch with Targum Onkelos, Haftarot, and the Five Scrolls. The Targum Onkelos is the Aramaic interpretative translation of the Hebrew Torah text. This particular kind of translation is known as a targum. Onkelos is the name of the translator, believed to have been a Roman citizen who converted to Judaism. The Targum Onkelos has been dated to c. 110 CE. The Haftarot are the weekly Torah readings, and the Five Scrolls is the collective name of the Song of Songs, the Book of Ruth, Lamentations, Ecclesiastes, and the Book of Esther. 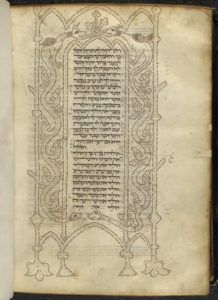 10) The Yonah Pentateuch can be found at the British Library, who purchased it on October 13, 1855, from M. Edwin Tross, who was a publisher in Paris.

Check out the Yonah Pentateuch, digitized in its entirety here.

Are you interested in reading more about amazing medieval manuscripts? Check out these previous Book Riot posts.