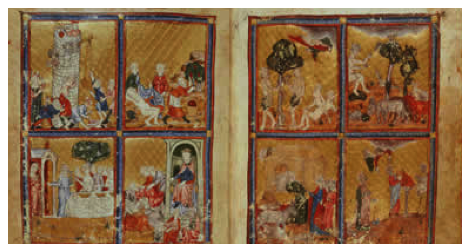 Next week is Passover, one of the most important holidays in Judaism. Passover celebrates the Exodus, in other words when God liberated the Jews from slavery in Egypt.

On the first night of Passover, family and friends gather round for the Seder when everybody takes turns reading from a book called a haggadah. The haggadah contains the story of the Exodus, intermingled with prayers and songs. The Seder is then concluded with good food and wine.

Because the Torah contains only text, and depictions of God are forbidden, over time the haggadah became the book where Jews interpreted their religion through images. Throughout the centuries, the haggadah also became a way for Jewish families to display their prosperity and wealth.

No other haggadah is a better example of this than the Golden Haggadah where the pages literally are covered in gold.

Here are ten things you need to know about this fascinating book.

1) The Golden Haggadah contains fifty-six miniature paintings depicting scenes from the Book of Genesis and the Book of Exodus. Each and everyone one of the images is decorated in gold leaf.

2) The book is written in Sephardic Hebrew script on vellum. It reads from right to left.

3) The Golden Haggadah was made around the year 1320 in Catalonia, Spain, possibly in Barcelona. The identity of who commissioned it is not known.

4) The Golden Haggadah is believed to have been brought out of Spain after the expulsion of the Jews in 1492.

5) The first owner of the Golden Haggadah to be known by name is Joav Gallico of Asti, Italy, who gave the haggadah to his daughter as a gift on her wedding day in 1602.

6) The Golden Haggadah was created by two artists. Their identities are not known. Judging from their artistic style, they probably belonged to the same studio in or around Barcelona.

7) The images in the book are in the High Gothic style taught in the artistic schools of Paris, which is known to have influenced artists in Spain.

Notice the French influence on the image, as well as the solid gold leaf in the background (British Library Add MS 27210).

9) The Golden Haggadah is an example of the cross-cultural borrowing that went on during the Middle Ages, especially in Spain. In this haggadah we find the coming together of French and Islamic art with Hebrew calligraphy.

As a result of the British Library’s Hebrew Manuscripts Digitisation Project, the Golden Haggadah is now available in its entirety online. Click here for a closer look at the book, complete with expert commentary to each page.

10 Things You Should Know About The Book of Kells