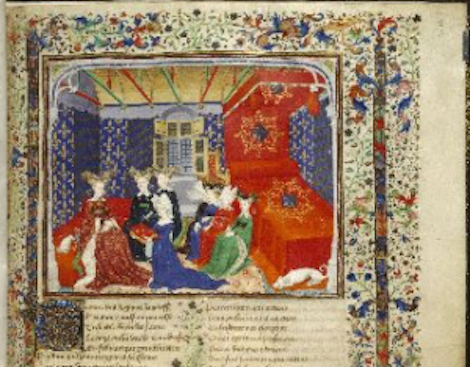 Two strong and pioneering women are behind the creation of the Book of the Queen, one of the most accomplished pieces of book art created in France during the Middle Ages.

These women are Isabeau of Bavaria (1371–1435), queen consort of Charles VI of France and regent of France during the minority of her son, the future Charles VII, and Christine de Pizan (c. 1364–c. 1430), French renaissance writer and one of the earliest known women in continental Europe to make her living from writing, today most famous for her early feminist work, Book of the City of the Ladies (1404–05).

Here are ten things you need to know about the Book of the Queen. 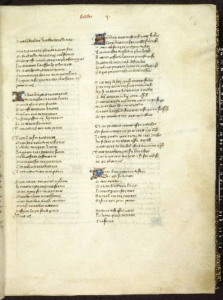 2) The book was made in Paris between 1410 and 1414. It is written in French with Gothic cursive script.

3) The Book of the Queen is a compilation of the most popular works by Christine de Pizan. Christine de Pizan turned to writing when she was widowed at the age of twenty-four and needed to find a way to support herself and her family. 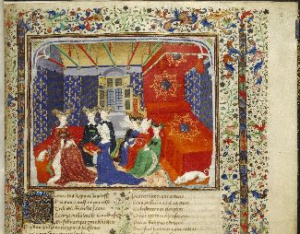 6) It is believed that Christine herself presented the Book of the Queen to Isabeau of Bavaria as a New Years gift in 1414.

7) The book was sold as part of a larger book collection to John of Lancaster, 1st Duke of Bedford (1389–1435), otherwise most famous for staging the trial and execution of Joan of Arc. 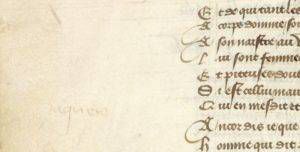 9) Jacquette of Luxembourg left her mark on the Book of the Queen by writing her name and her motto, sur tous autres (“above all others”) on the pages and inside the miniatures. Her handwriting can be found throughout the manuscript.

If you would like to flip through the pages of this book, the manuscript is available in its entirety, here. 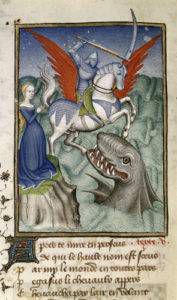 Perseus, riding on Pegasus, saves Andromeda from a sea monster. (The Book of the Queen, British Library, Harley 4431 f. 98v).

Read on with our series about cool and interesting old books, like the Book of Kells, the Codex Gigas, and more.