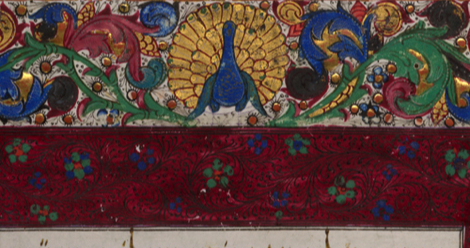 When King Afonso I of Portugal gained recognition for the independence of the Kingdom of Portugal in 1143, there had been a Jewish community in the Iberian Peninsula since at least the second century C.E. After having been expelled from Jerusalem by Emperor Hadrian, Jews found themselves a new home in one of the farthest-most provinces of the Roman Empire. The Jewish culture that developed here is known as Sephardic, from the Judeo-Spanish name for the Iberian Peninsula—Sepharad. A vital part of Sephardic culture was the creation of the Bible, also referred to as the Tanakh by Jews and as the Hebrew Bible by Christians.

Because Judaism does not allow imagery in its sacred texts, a distinctly Judaic art form developed in the eastern Mediterranean. This art form is called micrography and consists of images made up of words, i.e., images that you can read. In the Iberian Peninsula, the Jewish community developed its own Sephardic style of micrography. Not only that, after the separation of Portugal from Spain, over time Sephardic micrography and book illuminations developed into two distinct branches—an Andalusian branch centered on the city of Seville and a Portuguese branch centered on the city of Lisbon.

Arguably, the most famous book in the Portuguese style of book illuminations and micrography is the Lisbon Bible from 1482/1483, created a mere thirteen years before all Jews were expelled from Portugal and thirteen hundred years of co-existence and cultural excellence came to an end.

Here are ten things you need to know about the Lisbon Bible.

1) The Lisbon Bible consists of twenty-four parchment quires, i.e. a collection of twenty-four pages of the same size and material, bound in three volumes. The binding of the manuscript is from 1954 when a new hardcover replaced the old sixteenth-century binding.

2) The Lisbon Bible is a so-called codex, in other words what we refer to as a book. It is not a scroll, as Judaic sacred texts usually are, even to this day.

3) The Lisbon Bible was made in Lisbon, Portugal, in 1482/1483. Two scribes and a team of artists that mixed Italian, Spanish, and Flemish influences worked together to create the manuscript.

4) The Lisbon Bible was commissioned by a man named Yosef ben Yehudah al-Hakim, also known as Elhakim. He is identified by name inside the manuscript.

6) The Biblical text is written in two columns of 26 lines each. The text is written using a reed pen. The words at the beginning of lines and verses are inscribed in gold letters inside a panel of mauve filigree, surrounded by imagery on three sides.

7) The Biblical text of the Lisbon Bible is written in the squared Hebrew script typical for Sephardic manuscripts. The scribe is Samuel ben Samuel Ibn Musa, also known as Samuel the Scribe. Samuel identifies himself as the scribe inside the manuscript, where he lets us know that he finished his work on a Friday in the Hebrew month of Kislev in the Jewish year of 5243. In the Christian calendar this translates to November/December 1482 or 1483.

9) The copied text in the Lisbon Bible is of such high quality and accuracy that it has been used as a foundation for modern critical Bible editions. Because of this high quality, scholars suspect that the manuscript originally was intended to function as some kind of template.

10) The Lisbon Bible is kept at the British Library, who bought the manuscript from a man named Benjamin Cohen of Bukhara on November 17, 1882. Bukhara is a city in Uzbekistan, where the Jewish community traces its roots possibly all the way back to when Cyrus the Great of Persia liberated the Jews from the Babylonian Captivity in 539 B.C.E.

If you would like to flip through the pages of the Lisbon Bible, the British Library has made this amazing manuscript available in its entirety and in high-resolution images, here.

If you would to like read more about spectacular medieval Jewish manuscripts, click here for ten things you need to know about the Golden Haggadah.