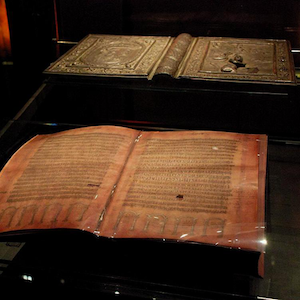 The Silver Bible, or Codex Argenteus, was created in Italy in the early sixth century. Soon after its creation, the book went missing. One thousand years later, it resurfaced in Germany. The story of the Silver Bible is a remarkable one that involves war, theft, unpaid librarians, book collectors, kings, emperors, and queens. On top of all this, the Silver Bible provides insight to the culture and language of one of the most enigmatic ancient peoples, the Goths.

Here are twelve things you should know about the Silver Bible.

1) The Silver Bible originally consisted of 336 folios of purple-dyed vellum of the highest quality. 187 of the folios are bound together in one single volume kept at the Uppsala University Library in Sweden.

2) The Silver Bible gets its name from the silver ink that was used when writing it. The current lavish silver binding was provided after Swedish Count Magnus Gabriel De la Gardie in 1669 donated the book to the Uppsala University Library as part of a larger collection of rare manuscripts.

3) The ratio between the Silver Bible’s written text and the measurements of the vellum page is the ratio of the Golden Mean.

4) The Silver Bible is in fact not a bible. It only contains the four Gospels.

5) The Silver Bible was created in the sixth century in the city of Ravenna, Italy. It was probably made at the court of the Ostrogothic king Theoderic the Great (454–526).

7) The text of the Silver Bible is based on the Bible translation from Greek to Gothic by Ostrogothic bishop Wulfila (311–383). When translating the Bible, Wulfila was forced to invent an alphabet for the Gothic language.

8) The Silver Bible is the oldest and most extensive text in the Gothic language that has survived to our time. Most of what we know about the language of the Goths comes from studying the Silver Bible.

9) After King Theoderic’s death in 526, the Silver Bible disappeared from historic sources and library catalogues for one thousand years. It resurfaced in the sixteenth century at the abbey of Werden in present-day western Germany. Sometime before the year 1600, Emperor Rudolph II brought it to Prague.

10) In 1648, the Swedish army looted Prague and brought the Silver Bible to Stockholm as war booty in the Thirty Years’ War. There it became part of Swedish Queen Christina’s personal library. After Christina’s abdication from the throne, the Silver Bible was given to her librarian, Isaac Vossius, as compensation for his unpaid salary. Isaac brought it to Amsterdam where Magnus Gabriel De la Gardie bought it and brought it back to Sweden.

11) In 1970, the last folio in the Silver Bible was discovered inside a reliquary during renovations of a chapel at Augsburg, located south-west of Werden. The discovery of the folio, referred to as the Speyer Fragment, has scholars believe that the other missing folios of the Silver Bible might in fact still exist.

12) In 2011, the Silver Bible was included on the UNESCO World Heritage List.

If you would like to hear the Gothic language spoken, click here to listen to the Lord’s Prayer in Gothic.