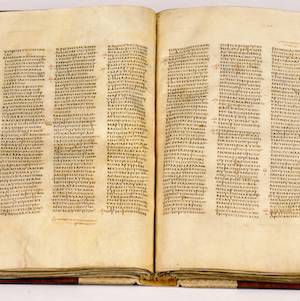 The upcoming exhibition Egypt after the Pharaohs at the British Museum in London, England, doesn’t open until October 29, but it has already been the cause of headlines. The exhibition chronicles the presence of Judaism, Christianity, and Islam in Egypt over a period of 1,200 years. The headlines were caused by a rare book that the British Museum will have on loan from the British Library and which will be included in the exhibition. The book in question is Codex Sinaiticus, often referred to as the oldest Bible in the world.

Here are nine things you should know about Codex Sinaiticus.

1) Codex Sinaiticus has been dated to the middle of the fourth century.

2) The book is handwritten in Greek by four different scribes.

4) Codex Sinaiticus is an important artifact in the development of book production. First of all, it is a so-called codex. A codex is what we today call a book, i.e. folded sheets with writing on both sides bound together to form a spine. During the fourth century, the codex began to take over from the scroll, which consists of sheets with writing on one side, glued together to form a roll. Second, the pages of Codex Sinaiticus are made from parchment. Previously, texts were mainly written on papyrus, which from the fourth century was phased out.

5) Codex Sinaiticus is important in the development of the Christian Bible. It consists of the Old Testament in Greek, as well as the New Testament in its entirety. But it also contains biblical books that today are considered part of the Apocrypha, i.e. early biblical writings excluded from the Bible because they don’t fit in with Christian doctrine as it developed through time.

6) Codex Sinaiticus is Latin for “the Sinai Book.” The book got its name from the place where it was stored from the sixth century to the nineteenth century–the library of The Holy Monastery of the God-Trodden Mount Sinai, commonly known as St. Catherine’s Monastery, located in Egypt.

7) Over time, Codex Sinaiticus has been divided into several parts. These parts are now stored at libraries in Egypt, England, Germany, and Russia.

8) In 1933, Soviet leader Joseph Stalin put up parts of Codex Sinaiticus for sale to raise cash for the implementation of the Second Five-Year Plan. The British Library bought it for £100,000. This is the section of the book that will now be on display at the British Museum.

9) Codex Sinaiticus is, in fact, not the oldest Bible in the world. A correct description of the book would be that it contains the oldest surviving complete manuscript of the New Testament, together with sections of the Old Testament and books of the Apocrypha.

If you would like to know more about St. Catherine’s Monastery at Mount Sinai and its library, please visit the monastery’s official website.