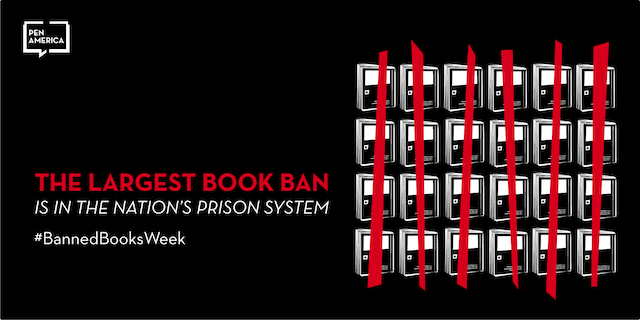 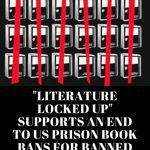 Over 2.2 million people in the US face tremendous restrictions on their freedom to read. It’s not young people in schools; it’s those who are behind bars and experiencing incarceration. This year, as part of Banned Books Week — September 22-28 — PEN America will start a week-long initiative to bring attention to the regular practice of banning book access to prisoners. “Literature Locked Up: Banned Books Week 2019” will bring attention to those who are having access to vital resources stripped from them.

“Literature Locked Up” takes a multi-step approach, utilizing in-person events across the US with tools and resources for launching events for those who wish to do so. The website provides a tool kit and templates for bringing attention to prison censorship through resources for social media, as well as more local, on-the-ground coverage.

There’s also a petition aimed to get Congress to take action on the largest book ban in America.

Details about official events are forthcoming and planned for Banned Books Week, but include coordinating with bookstores and other partners across the country to highlight book bans, including events in Oklahoma, Michigan, Illinois, and Texas. PEN America will co-present Banned Together, a series of performances across the country of shows that have been censored or challenged on the American stage in coordination with the Dramatists Legal Fund.

“With all of our societal focus on how to make the criminal justice system more just and less self-defeating, vindicating the right to read in prison is an obvious and essential step,” said Suzanne Nossel, CEO of PEN America. “Yet tens of thousands of books are banned in prisons. Systems ban access to everything from classics including Alice Walker’s The Color Purple and Toni Morrison’s Paradise, to coloring and self-help books. These restrictions are stunningly arbitrary and defeat the ability of incarcerated people to learn, explore, and envision a future. We call on states and the federal government to lift these pointless bans and uphold the freedom to read.”

Earlier this year, we reported on Washington state’s bans, Florida’s bans, Ohio’s bans, and bans in New Hampshire. It’s well known that access to books and literature in prisons reduces recidivism rates, and by banning books or placing undue burden upon those wishing to make donations of materials, the system does more harm to an already vulnerable population. Many of these instances of censorship have come to more public attention due to the work of organizations like Seattle’s Books to Prisoners and other prison book programs, as well as the Human Rights Defense Center. Prison book programs have discovered their materials being returned, despite following the guidelines given to them by officials. Chronically underfunded, these nonprofit organizations don’t have as much power behind them as organizations like PEN and partners, but the attention to censorship in US prisons will also shine a light on their work.

“We are beyond excited that this spotlight is finally being focused on prison censorship. Prison book programs have been fighting bad book policies since the 1970s, but prison censorship has spread despite our best efforts. This campaign represents potential: the potential of our combined groups, our allies, and concerned supporters nationwide. We encourage everyone to get involved in this campaign–share with your networks, hold events, and seriously consider PEN America’s policy briefer in pushing political leaders to establish the improved guidelines and oversight that readers in prisons deserve. Authors and publishers in particular, your voice has real power in this fight! Use it,” said Michelle Dillon, a representative of HRDC and Books to Prisoners.

“Literature Locked Up” is a partnership between PEN America and sponsors Daily Kos, Defending Rights & Dissent (DRAD), RootsAction.org, and Progress America. The tools and resources provided are meant to help people at all levels of power to speak up and out about prison book censorship.