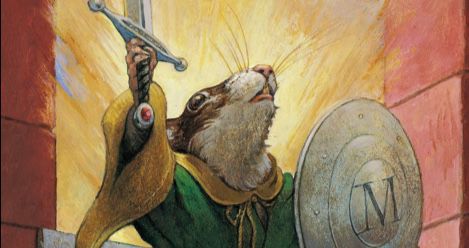 When I was a kid, books were always the one thing that my parents would buy any time I asked for one. There was no negotiation or fear of rejection, like with a new toy or video game, dinner at a restaurant, or a day at the amusement park. I grew up in a lower middle class family, tightness of money being a constant undercurrent of my entire childhood, but expenses were rarely spared for books.

You can imagine, then, that the Scholastic book fair was a big deal to me. While my parents had to set limits on how much I could order—two or three books, maybe four if they were all paperbacks or my father had recently worked overtime—but they never imposed any restrictions on the types of book I purchased.

This freedom was how, at 12 years old, I ordered myself a book with a genuinely unusual cover: a terrified creature (a squirrel?) raising a sword twice the length of its own body, prepared to swing at a ghastly looking beast shrouded in shadow in the foreground. Its title, embossed on the dust jacket in swirling gold font: Rakkety Tam. 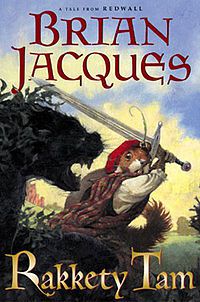 The novel is the 17th in the Redwall series. It follows the voyage of a mercenary squirrel, Rakkety Tam Macburl, and his traveling companion, Wild Doogy Plum, as they become the unwitting heroes of Redwall Abbey, arriving in the land of Mossflower to put a stop to Gulo the Savage and his cannibalistic horde of white vermin.

I didn’t know anything about Redwall and its wider mythology when I ordered it, but Rakkety Tam turned out to contain everything I wanted from a book at the time: great fight scenes, long journeys, and a vivid, fantastical world. It came to me in the midst of an otherwise long and arduous reading slump, and acted as my gateway toward a seemingly endless universe of stories, characters, and, of course, extravagantly described feasts.

I set myself the goal of reading every entry in the series—21 books by the time I graduated high school—and although I never finished more than six or seven of them, my memories of Redwall Abbey and its denizens remained joyfully intact all the way into adulthood.

Brian Jacques, author of Redwall, died in early 2011, and like many readers, I felt great sadness. The books that had accounted for a good chunk of my young adult reading, which had felt as though they belonged to an infinite fictional universe, were suddenly finite. One more book was in the pipeline, the posthumous The Rogue Crew, but afterward there would be no more new words from Jacques’s typewriter to our libraries, shelves, and book fairs. 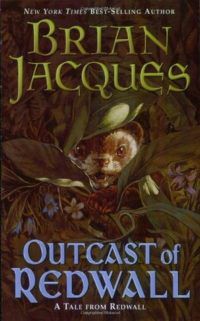 I was in my first year of college by then. Over spring break, I cracked open one of the Redwall books I had long owned, but had not yet read: Outcast of Redwall. This book, more than any other in the series, fascinated me with its concept. Whereas in every other story the vermin (ferrets, stoats, rats, etc.) are always characterized as inherently evil, Outcast offers the possibility that things are not so preordained as the other books suggest.

This book follows a young ferret named Veil Sixclaw, whose warlord father abandoned him in infancy, and who was taken in as a child to live in Redwall. Although he is raised in the kind and idyllic environs of the Abbey, Veil cannot ward off his species’s predilection for bad deeds. As a baby, he bites those who try to care for him. He steals from his neighbors, and finally tries to poison an Abbey friar. When he is caught, he is banished from Redwall and resigned to spend the rest of his life exiled. Veil eventually rejoins his father’s tribe, ultimately resulting in a violent end for the ferret, who sacrifices himself near book’s end for the sake of Redwall warriors’ mission to defeat the warlord.

I left Outcast of Redwall feeling angry. Not because the contents of the story had riled me emotionally, but because I was annoyed at how it portrayed Veil. The book had asked the question, Is a creature’s goodness or badness determined strictly by their species?, and seemed to arrive at an affirmative answer. The official Redwall/Brian Jacques website supports this conclusion:

Will you ever have any really good vermin or bad woodlanders in any of your stories?
No! The goodies are good and the baddies are BAD, no grey areas.

As a kid, I didn’t think anything of the implication that some creatures are non-negotiably evil; I simply accepted it as fact. As an adult, this lesson unsettled me. Veil spent his entire life living in the shadow of his predetermined evilness. He was only allowed to commit one truly good act, throwing himself before a javelin intended for his surrogate mother, thereby saving her and enabling the Redwall heroes to defeat his evil father. Veil could only defy his destiny of being evil by sacrificing his mortal body, and only in service to the mission of the “true” good guys. 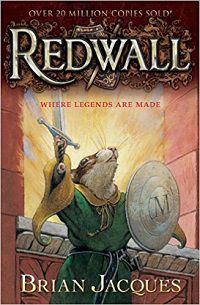 If we are teaching children that some species are destined to be good, while others are destined to be evil, how can that framework be applied more broadly? Does it teach children similar lessons based on gender and race? Redwall may not explicitly espouse the many bigotries of human life—no human character appears in the series, after all— but it does nothing to challenge them.

I still love Redwall. I still regard Rakkety Tam, The Long Patrol, and Mattimeo as seminal reading moments in my life. I love how the series contains many stories of underdog characters relying on wit and bravery in the face of atrocity. I plan to introduce the books to my nieces when they are old enough, and to do the same should I ever have children of my own.

But my love for the books, my fondness for their memory, and my introductions of them to new readers will always have an asterisk: while these are great fun to read, and while you can glean some valuable lessons from them, the determinism in Redwall is not indicative of the real world.