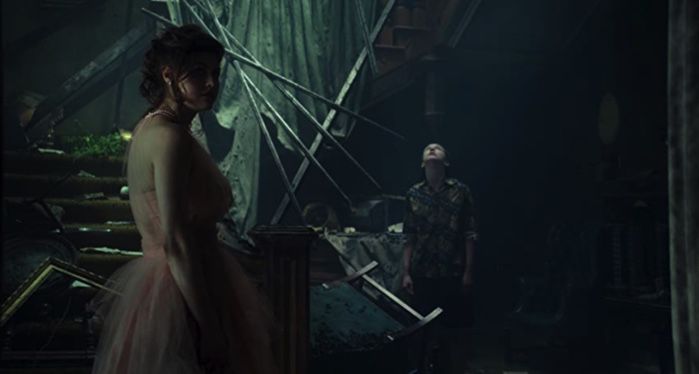 Shirley Jackson’s We Have Always Lived In The Castle is not a horror novel; so why does Merricat Blackwood haunt readers for long after we read the book? There are, of course, many possible answers, most of them totes legit, but I am here to discuss one specific reason: creepy teenagers are like catnip for many readers, especially those of us who felt…different when we ourselves were teens.

Merricat only leaves her family home (the titular castle) to go into town for supplies for her agoraphobic sister Constance. The townsfolk hate the Blackwoods so much that even the children who were not yet born when all the other Blackwoods died throw stones at Merricat and sing chants about Constance killing her. Merricat has very little power, but she fully believes in the rituals she does to keep herself and Constance safe. When those rituals fail and everything goes wrong, Merricat lashes out and isolates herself and Constance even more.

Ines in Elisabeth Thomas’s Catherine House is even more passive than Merricat, but she is equally haunting. Like most teenage girls, Ines wants to belong. She wants to be part of something. But when she is offered exactly that, she does not know how to be part of Catherine House—and she suspects that it is not what it seems. Ines is an infuriatingly passive character, but no more so than Merricat. She is a girl whose place in the world is decided by everyone but herself, and what could be more relatable than that to anyone who’s ever been a teenager?

Straying further from “proper” horror, I come to James Juniper from The Once and Future Witches by Alix E. Harrow. Our Juniper is 17, disabled, abused and abandoned, a witch, and angry. Authority figures of every variety instinctively hate Juniper, because an angry witch—and angry girl—is dangerous. It seems like everyone wants to control Juniper; even her older sisters, who love her fiercely, do not fully understand her or approve of her violent and dangerous methods.

Laura Ruby’s Thirteen Doorways, Wolves Behind Them All deals with the horrors of poverty, but is not a horror novel despite being narrated by a ghost. It’s World War II and Frankie and her sister Toni live in a Chicago orphanage because their father can’t afford—or doesn’t want—to care for them. Pearl, who died during the previous World War and deadly influenza pandemic, observes Frankie’s life and slowly remembers her own. Ruby has said of this book that “it is…a story about girls. Girls with ambitions, brains, desires, talents, hungers. It is a story about how the world likes to punish girls for their appetites, and even for their love.” If that’s not a summary of what it is to be a teenage girl in the world, I don’t know what is.

In The Impossible Girl by Lydia Kang, Cora hides her true identity because she knows her body, with its impossible dual hearts, is more interesting to science if she is dead. But if she weren’t a medical anomaly, Cora would still be a girl in a time when it was even worse to be a girl, would still have been born out of wedlock and raised by someone she isn’t even related to. She would still be a cross-dressing grave robber. So is the monstrosity of having two hearts really what keeps Cora having no place in the world?

There are many other creepy teenagers from many other novels I could have included here. Looking at what makes a girl or woman a monster, or what humanizes a monster, is a wholeass genre unto itself. Wicked Fox, Wilder Girls, and so many others address this topic further. Many other books about teenage girls are not at all about monsters, but address the world’s fear of teenagers in their own ways—Binti, The Good Luck Girls, This Savage Song, Sawkill Girls, Undead Girl Gang, Labyrinth Lost, When We Were Magic, and countless others.