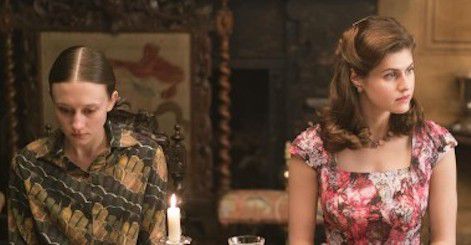 I have not read my favorite* book, We Have Always Lived in the Castle, since the film adaptation was announced, because I didn’t want to have it too fresh in my mind and get upset that the very different medium “ruined” something from the book. I may not believe that’s a thing, but I am only human.

The movie does not yet have distribution, but I happened to see that it was playing at the Los Angeles Film Festival last month, and was able to purchase a ticket. This will not be a proper film review, but my musings on director Stacie Passon’s gorgeous achievement.

Here is how I know that We Have Always Lived in the Castle is having a moment: the two people directly ahead of me on line for the LAFF screening were teenage girls, and they were trembling with excitement and anticipation. If you want to know whether something is good, there is a simple trick for finding out: look to teenage girls. If they like the thing, it is good. My only regret is that I did not find them after the movie to ask what they thought; you will have to make do with what I think.

I may not have read the book recently, but I’ve read it approximately one million times and I have a fairly good idea what happens in it. The movie is simultaneously very true to the book while expanding upon many details that the unreliable narrator either could not have known, may have lied about, or might not have understood. Specifically, the details of Constance’s relationship with Charles—and her past relationships, romantic as well as familial—are shown on screen while only vaguely alluded to on the page. There is one major change at the end of the movie, something that worked perfectly in the book but might not have carried enough weight in the movie. I have no complaint, except to wish that the fire effects had looked better.

To me, story is the most important thing on earth. I consume every type of storytelling I can get my hands on—books, movies, any good story. This story is perfect. That is not up for debate.

But when you make a movie of something, the story ceases to be the only thing that matters. Stacie Passon clearly knows that, and has filled this movie with gorgeous visuals. The cinematography, the sets (a small town and bed and breakfast in Ireland), the costumes, the set decorations—thousands of little details all perfectly thought out and placed—add up to absolute perfection. I gasped at Constance’s Bakelite earrings, and later her mother’s pearls.

Every word that Shirley Jackson wrote served a purpose. Likewise, every choice made for the movie was deliberate and just right.

(Also, The Haunting of Hill House is now on Netflix!)