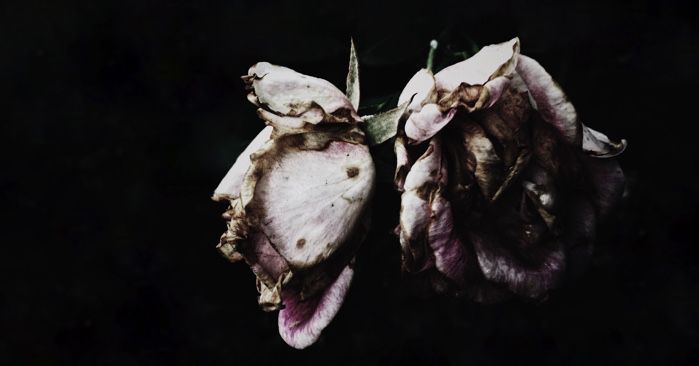 It’s not every day that a romance begins with the smell of blood and a corpse. All right, well, actually, it probably is if you read predominantly romantic suspense. There’s really no shortage of bodies in that sub-genre. Read the right Karen Rose novel and they pile up like cordwood. But I guess what I’m getting at is that when Eve Silver’s Dark Desires opened with footsteps in the thick London Fog, the smell of blood, and an extremely suspect hero toting a dead body around his carriage, I knew I was in for a treat.

The Dark Gothic series is comprised of six books that, as you might guess from the series title, take as much inspiration from the gothic as they do from the romance genre. But while gothic-inspired romance novels are fairly common in the genre, modern romance stemming as it does from the gothic and the rise of the sensation novel, Silver’s Dark Gothic series has a little something extra to offer its readers: Horror.

Yes, this is where I owe Eve Silver an apology. I wrote a post a couple of years ago lamenting the lack of a distinct horror romance sub-genre, and cited this series a being “almost” there but not quite achieving the full horror hurrah. I would like to retract that statement and say, quite happily, that this series is every bit worthy of being called horror romance. Indeed, Dark Desires is a delicious pastiche of romance beats, allusions to both classic horror texts such as Frankenstein and historical events like the Whitechapel murders and the Burke and Hare body thefts in Edinburgh.

Dark Desires is also a loving homage to the 1996 horror film Mary Reilly (itself inspired by the novel Mary Reilly by Valerie Martin, an adaptation of Robert Louis Stevenson’s gothic novella Strange Case of Dr. Jekyll and Mr. Hyde). If you were never a 13-year-old madly in love with John Malkovich who watched that movie an embarrassing number of times and can still quote whole scenes (yes, I’m calling myself out here), you might not spot the similarities right away. But from specific imagery and scenes to the name of the ominous house butler, Poole, Dark Desires is definitely a love letter to gruesome little film that I love with all my heart.

Altogether, Silver’s first Dark Gothic novel is a deeply satisfying read for lovers of dark historical romance, and its frightening climax is everything a horror reader could hope for as the plot suddenly goes full on killer in the locked house fun. And by fun I mean that during my reread every hair on the back of my neck stood up at one point. Either I hastened through the ending last time or else I had forgotten how scary it really is.

Much of the horror potential in the novel is held in the figure of an unknown killer, and the tension the drives the plot is derived in part from the is he/isn’t he nature of the novel’s hero, Dr. Damien Cole. Who couldn’t possibly have a more ominous name or profession, as his work as a doctor has taken second chair to his work as an anatomist. After the tragic death of someone he loved—which resulted in some drastic attempts at Galvanism a la Victor Frankenstein—Dr. Cole turned to the study of death and ended up hiring the heroine, Darcie Finch, to illustrate his work since he lacks the artistic talent.

Obviously, as he is the hero of this tale and, though inspired by the gothic, Dark Desires is first and foremost a romance, Damien Cole will have to turn out not to be the killer in order for there to be a happy ending. But Silver is very good at making you wonder. The first reference to Damien in the text is extremely ominous:

“And mind, have a care of him. Dr. Cole. he is a hard man, a man to fear. Stay out of his way. Stay clear of his work. And keep your nose out of his secrets.”

And Darcie’s first impressions of him—

“Her heart gave a hard, sharp kick against her ribs as she took in his long black cloak and polished books, splattered with the mud of the road.”

—is meant to evoke an earlier description of the man stalking Darcie through the thick London Fog, which is really quite a creepy, tense opening scene. The dense fog, the echoing footsteps, Darcie hiding in the shadows of a doorway, her heartbeat pounding in her ears.

“She could hear the sound of his breathing, low and rough. He was close enough now that she could lean out and touch his cape if she were of a mind to summon his notice. The garment was long, nearly to the ground, black in color, and of a fine material. She could see the smooth surface of his highly polished Hessians, splattered by the mud of the road.”

So clearly we are meant to suspend our trust in the HEA and join Darcie in her doubts about Damien—and why wouldn’t you, when wondering is half the fun? Damien appears with the face of an angel and the bearing of a villain. And if shared appearances between him and the killer in the mist weren’t enough to set warning bells clanging, when Darcie accepts an invitation to join him in his carriage she finds herself sitting across from a dead body! Which Damien is alarmingly cavalier about, by the way:

“Oh, yes. He is dead. Has been for several hours. Anything more than that and the stench would chase us from the carriage.” He smiled almost amiably as he said it.

The Killer in the House

Dark Desires does its best to keep the reader on its toes, suspecting everyone and anyone of being the scalpel wielding killer in the shadows, leaving dead women strewn across the East End in his wake. And unlike authors who sort of lob a suspect at you near the very end, Silver does an excellent job of making sure that when you look back you realize that he was there all the time. Lurking. I am being deliberately vague so as not to give away the game, but when the killer does finally emerge, an already dark novel takes an even more (delightfully) sinister turn.

We all know the horror trope: the darkened house, its doors locked. Barred in a way that was meant to prevent intrusion but will now prevent escape. Our heroine and her sister trapped inside and there, in the shadows, the killer and the knife. And out of the darkness, a voice:

“Darcie.” A whisper, both faint and menacing. Terror gouged her with sharp talons. Abigail’s fingers closed painfully tight on hers. “Darcie.”

“Abigail.” The sound of his voice drifted up the stairs, laced with the ghastly promise of his darkest longings. “Why do you run? Wait for me, Abigail. Introduce me to your lovely friend.”

Tell me that’s not terrifying. I don’t even have words for how much I love this whole sequence. And maybe it is my increased familiarity with horror that made it stand out so much more to me this time than it did on my first read through. Or maybe, like I said, I hurried through it the first time in my race towards the end of the book and missed out on a good scare. Either way, Silver really takes the chance to show off her horror chops in the final showdown between Darcie and the killer.

At one point Darcie and Abigail are tiptoeing as silently as possible through the creaky old house, and you have no more idea where the killer is than they do. You’re just hearing his voice, taunting. It’s classic. When they barricade themselves in one of the rooms, but can’t get the bureau all the way in front of the door and the lightning flashes and there’s his creepy face watching them from the partially open door I was legitimately freaked out. I can’t get the image out of my head. Every internal door in my apartment is wide open and staying that way. It’s clear that Silver set out to write a historical romance that was genuinely scary, and with Dark Desires she definitely succeeded.

Finding the Horror in Romance

I’ve argued before that romance and horror are not incompatible as genres, and that they in fact share elements in common. That includes a common ancestor in the gothic. Romance grew out of the tradition of gothic romance novels like The Italian and others, whereas horror grew out of the tradition of novels like The Monk and Melmoth the Wanderer. But they both have their roots in the same soil, which explains in part why Silver was able to marry them so well in her Dark Gothic series.

Many of the gothic-inspired romance novels I’ve read—most of which, understandably, have been historicals—have been inspired by novels like Jane Eyre, or even by fairytales like Beauty and the Beast that have come to be associated with familiar gothic motifs like the dark, forbidding castle (my sincere thanks to Disney for that), and the brooding and at times frightening hero. And it is worth noting that, like Beauty’s father in the original fairy tale, Darcie’s family fell on hard time when her merchant stepfather’s fortune sank to the bottom of the “pitiless ocean.” So Silver is not at all unaware of the gothic source texts that tend to inform the romance genre. But Dark Desires moves away from the gothic romance elements, embracing instead classic gothic horror texts such as Jekyll and Hyde (in adaptation, in this case) and Frankenstein.

The result is a book that is a much a love letter to horror as it is to romance. So I am happy to recant my previous statement and say instead that Dark Desires and the rest of Eve Silvers’s Dark Gothic romance novels are every thing I could possibly want in a horror romance. If you’ve also been looking for that perfect cross-genre romance read for this Halloween season, this is the book for you!

If historical romance is not to your taste, Jessica Pryde has written a fantastic list of 10 horror romances with a little bit of something for every reader, no matter their preferred sub-genre.