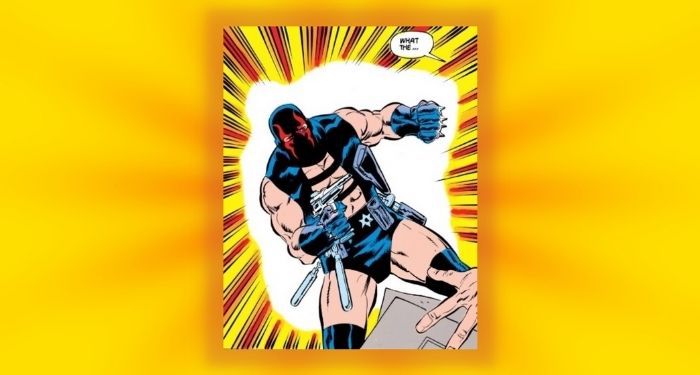 What is a superhero without a supervillain? Not much. Some supervillains, however, are worth a lot more than others. I have therefore decided to spotlight some lesser-known villains. Are they underrated gems or irredeemable losers who deserve to be forgotten? You decide! Today’s subject: KGBeast!

Anatoli Knyazev was a mystery even to the Soviet government he allegedly worked for. I say “allegedly” because he was under the control of a rogue agent who sent him out on many unsanctioned missions. When the government caught up to that agent, he died by suicide and sent Knyazev — named the Beast in Russia, the KGBeast in America — on a final mission to Gotham City. This was chronicled in the “Ten Nights of the Beast” storyline from 1988.

His mission? To kill all of the head honchos associated with the Strategic Defense Initiative, a program designed to make nuclear weapons obsolete. Aside from President Ronald Reagan, the people targeted in the comic are fictional, but the SDI was a real government program founded in 1983. Comics from the late ’80s, unlike earlier comics, were all about trying to inject gritty realism into Cold War stories.

So, naturally, they made the KGBeast look like this.

Oh, there are so many things I want to say to this. None of them are appropriate.

The KGBeast is an expert in multiple martial arts and every weapon you can name. He has the strength of four men and impressive resistance to drugs. Even Batman has to admit he is outclassed. For me, though, his fearsome reputation is undermined in a scene where, after Batman snares his hand in a rope, KGBeast frees himself not by cutting the rope but by chopping his own hand off. He then replaces the hand with a cool gun, but that really wasn’t necessary, guy.

Despite the outfit, KGBeast manages to murder about a hundred people in just ten days. Batman stops him by, uh, locking him in a sewer and leaving him to die. Welcome to the Edgy ’80s!

By the time the KGBeast returned, the Soviet Union had collapsed and there was a new Robin, Tim Drake, in town. How did he deal with these changes? Not well!

Apparently incapable of functioning without a handler, KGBeast goes to work for a group of ex-KGB agents called the Hammer. They are now intent on making it big as mobsters in Gotham City. Beast is definitely not the brains of the operation: his employer describes him as “stupid” hired muscle, which seems unfair. He may have been working for a handler in his debut appearance, but he showed incredible ingenuity and cleverness in the course of executing his mission. There’s no way he would have beaten Batman with muscle alone.

Another change from his debut: his speech patterns. Originally, KGBeast is fluent in English, but he doesn’t talk much, which adds to his air of mystery. Writer Chuck Dixon turns him into a ranting cartoon villain whose English is choppy in a way I assume is supposed to be funny. With the USSR a fading memory by this point, maybe the idea of an unbeatable Russian super-soldier was too difficult to take seriously, so they went for humor.

At least Dixon acknowledges KGBeast’s superior fighting abilities: Robin can’t defeat him alone, and it’s another villain, King Snake, that ultimately lays him low. But even this doesn’t last long. By Robin #14, Robin is able to defeat KGBeast entirely by himself. No disrespect to Tim Drake, but no.

KGBeast also got another cybernetic enhancement at some point, this one in his head. If there’s a comic that explains how and when this happened, I missed it.

(I also missed the comic that explains how he escaped the room Batman locked him in. Apparently, Bats called the cops to let him out, which makes no sense, as he only locked him up in the first place because he knew the Soviet authorities would never hold KGBeast accountable. This was his idea of “justice.” Yes, leaving a man to slowly die from dehydration and starvation is “justice” now. You heard it here first/worst.)

KGBeast regrew a few brain cells in this 1997 special (notably written by Devin Grayson, not Dixon). For the first time, we get to see how KGBeast operates on his own with no handler or boss in sight. He comes up with a plan to kidnap the assassin Cheshire and sell her to some nefarious fellows from Qurac, a Middle Eastern nation that Cheshire nuked several years earlier.

Cheshire’s ex, Arsenal, is determined to save her, mostly because she’s the mother of his daughter. Knowing he is far outclassed by the KGBeast, he reluctantly goes to Batman for help. Shenanigans ensue.

We don’t see too much of the KGBeast this issue, but that’s a return to form for him: the shadowy mastermind behind unspeakable criminal activity. Plus, it’s a fun issue in general, especially if you’re an Arsenal fan.

After playing a recurring but minor role in the “No Man’s Land” event, KGBeast was killed at the start of the “Face the Face” storyline. His death comes at the beginning of Detective Comics #817, so this isn’t much of an appearance for him, but I include it here because it marks the first time anyone bothered to get inside his head.

Nothing too surprising: KGBeast is nostalgic for the good old USSR and the days when he would assassinate powerful men rather than snitches. He recognizes how far he has fallen, but he’s philosophical about it and remains a professional to the end, doing his job effectively even when he feels it’s “beneath” him.

Anyway, after his death, his body was dug up and mutilated for cloning purposes in the “Freefall” storyline in Nightwing, then he was revived as a zombie in Blackest Night: Batman. It makes sense: he was never much more than a prop and a puppet even when he was alive.

KGBeast did come back, again. In Batman #55–57, we learn a bit about his family history (short version: he killed them all). It ends with Batman breaking his neck and refusing to get him medical attention, bringing us full circle to “Ten Nights of the Beast” where Bats technically murdered him but left enough wiggle room to make himself feel better about it.

Not that Batman particularly wanted to feel better in this case: KGBeast had just shot Nightwing in the head. But that leads into the Ric Grayson era, and I don’t feel like opening that can of worms. Here’s a TikTok summary, if you’re that much of a masochist.

I’d also like to say that these articles are planned and written well before you read them. I chose to cover the KGBeast purely because of my interest in Cold War-era comics. The fact that Russia re-invaded Ukraine while I was brainstorming this article was a coincidence — one that inevitably colored how I feel about the character.

I was intrigued by the character based on his first appearance, but I don’t know as I’d call him an underrated gem. After that, KGBeast becomes a pretty definitive loser. I blame this on Chuck Dixon, who wrote a surprising number of KGBeast’s appearances. I guess he really liked the character, which is ironic, as I’m not convinced Dixon — or the writers who followed his example — understands him.

In his debut, KGBeast is in the employ of others, yes, but he is more than capable of leading others, thinking for himself, and patiently playing the long game to achieve his goals. In Dixon’s hands, he became a hot-headed grunt who, while physically tough, can be easily goaded into losing control, leading to repeated defeats.

Normally, this is where I might advocate for the character’s strong points and suggest ways he might successfully be given more of a spotlight. However, I don’t think this character should get any attention at all. That may sound counterintuitive: I did just say he has interesting qualities, and as I’m writing this, it genuinely seems like we’re on the verge of another Cold War. Isn’t the KGBeast a perfect villain for a time like this?

In my mind, no. In fact, those are the exact reasons he should not come back. Russian civilians and those of Russian descent are already facing unwarranted abuse and discrimination — not to mention life-destroying sanctions — over a war they didn’t ask for, don’t want, and, in some cases, are risking their safety to protest against. Giving a platform to a remorseless Russian killer right now would send a terrible message, especially given KGBeast’s history of targeting Ukrainian immigrants as he did in Robin III. The only way I see his return maybe working is if the hero fighting to stop him is also Russian. This would establish that the Russian government is the enemy here, not the Russian people. Still, this is precarious, and I don’t recommend it, at least not now.

I’ve talked before about superhero comics’ tendency to treat all Russians as suspicious, if not criminal. This was bad enough two years ago when I wrote that article; it is outright irresponsible now. I’m sure comics will deal with Russia’s war on Ukraine, and when they do, I sincerely hope they learn from the mistakes of Cold War and even World War II comics. Oversimplifying, stereotyping, and misidentifying the enemy helps no one.