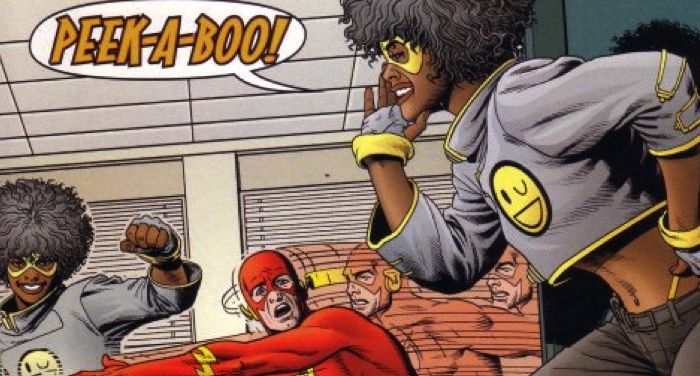 What is a superhero without a supervillain? Not much. Some supervillains, however, are worth a lot more than others. I have therefore decided to spotlight some lesser-known villains. Are they underrated gems or irredeemable losers who deserve to be forgotten? You decide! Today’s subject: Peek-a-Boo!

Peek-a-Boo debuted in Flash #180 with this absolutely fantastic cover.

I love how playful it is. But this jauntiness reflects the comic’s contents not at all.

Lashawn Baez was in medical school when her father became seriously ill. She dropped out of school to care for him and even tried to give him her own kidney. But as the operation began, Lashawn’s latent powers kicked in: any time someone touched her, she would uncontrollably teleport away, creating a violent explosion in her wake.

Now desperate, Lashawn decides to use her powers to steal a kidney meant for someone else and give it to her father. She is clearly traumatized by the whole situation.

But at least she has those snazzy roller blades?

The Flash (Wally West, the former Kid Flash) doesn’t realize Peek-a-Boo’s true motivation until after her arrest. He feels bad about it, but not bad enough to, say, use his star power to encourage people to donate a much-needed kidney. No, he’s too busy super-speeding to Arizona to stare moodily into the Grand Canyon.

For the terrible crime of trying to save her father, Lashawn is consigned to Iron Heights, an infamous prison for super-powered villains. Despite my ribbing of the Flash before, in Issue 191, we find out he is actually working to get her sentence commuted so she can serve time in a halfway house instead of prison.

Unfortunately, the warden at Iron Heights is a real piece of work and refuses. Not only that, he orders his minions to drug Lashawn almost senseless so that she botches her upcoming meeting with the guy sent to help her.

It’s here that we see the Iron Heights guards trying to make good on the warden’s threat. Just as they’re about to inject Lashawn, the power goes out, nerfing the security measures in her cell that prevent her from teleporting.

Peek-a-Boo escapes on her own, but even if she hadn’t, she probably would have been freed in a few pages when Grodd, a super-intelligent gorilla, busts loose and sets the other inmates free. But it’s nice to see her take the initiative.

During her time on the run, Peek-a-Boo apparently figured out how to control her powers to some extent. In this issue, she pops into the hospital to visit her dying father, whose body is rejecting the kidney that he did manage to get. We see her kiss him without teleporting, then she picks him up and teleports away of her own volition. Oddly, she has taken to shouting “Peek-a-boo!” whenever she teleports, giving the impression that the phrase activates her powers. Maybe that’s how she focuses.

The Flash runs her down, and Peek-a-Boo, understandably upset that he is interrupting her final moments with her dad, attacks him. The attack has the unintended side effect of injuring the Flash’s pregnant wife, Linda. When he begs Peek-a-Boo to help her, we get this glimpse into Lashawn’s mindset.

Peek-a-Boo is downright insulted that the Flash would assume that she, a former medical student and all-around ordinary person who was thrust against her will into a series of horrifying situations, wouldn’t help an injured innocent. Not only does Peek-a-Boo get Linda medical help, she turns herself in immediately afterward.

A character named Shawna Baez appeared on The CW’s The Flash. I’m sure I saw at least one of her appearances back when I still tolerated that show, but I’m not about to go back and look. From what the internet tells me, Shawna is less sympathetic than Lashawn — she was a petty criminal who busted her boyfriend out of jail — but again, I can’t be bothered to actually check. If that’s true, I am not a fan.

On a brighter note, an angst-free version of Peek-a-Boo appeared in the disgustingly adorable Tiny Titans comic. Here, she is at best a playful rival for Wally/Kid Flash. They even have a mutual crush on each other!

Things are less cheery in the main universe: Peek-a-Boo’s most recent appearance was as part of the Legion of Zoom, a cadre of supervillains that Reverse Flash plucked from throughout the timestream for the express purpose of ruining the Flash/Barry Allen’s life. It’s stated that Reverse Flash manipulated all of these Rogues into helping him, which makes sense, as Peek-a-Boo’s beef is with Wally, not Barry. I don’t think she’d volunteer to go messing with Barry of her own accord…though I suppose they could be implying that Reverse Flash snatched her out of the future and that she becomes a nemesis to Barry later.

Underrated gem. So underrated, in fact, that I am genuinely upset about it.

The Flash has one of the all-time great rogues galleries. Peek-a-Boo’s only crimes (so to speak) were being created so many decades after the really famous Rogues (Captain Cold, Heatwave, et. al.) and debuting in the early 2000s, when DC seemed determined to make the entire Rogues Gallery as gross and grimdark as possible. These villains-come-lately don’t have the same cultural/nostalgic currency that the earlier Rogues have.

Peek-a-Boo absolutely has the capacity to become just as great as the more famous Rogues: not only does she have a distinctive (if somewhat dated — check out that thong strap) design, she has an epic origin story. On the one hand, she has genuinely dangerous and uncontrollable powers (or she did at first). On the other, she appears to be a good person who was brutalized by an unfair, uncaring criminal “justice” system. In terms of story potential, this is a gold mine.

There are many directions DC can go with Peek-a-Boo at this point. Maybe she can embrace her perception as a villain and become a full-fledged Rogue? Or maybe DC can take her in a more serious direction, showing how the criminal justice system so often targets and mistreats minorities, and how even a well-meaning superhero can play into that system if they aren’t careful? While they seem to be favoring the former option (see: Legion of Zoom), I can very easily see Peek-a-Boo as the subject of a compelling miniseries that chronicles her struggles with and triumphs over a biased legal system…or her descent into true villainy.