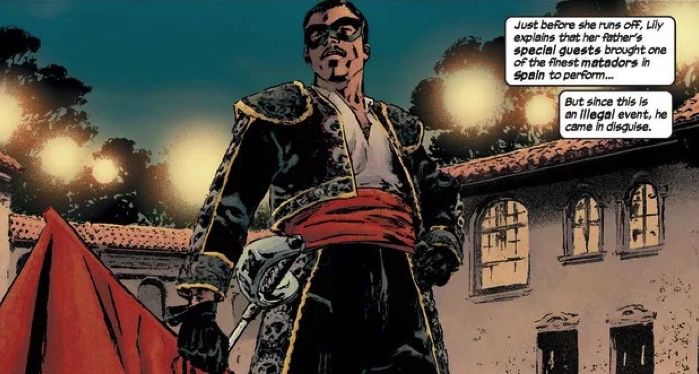 What is a superhero without a supervillain? Not much. Some supervillains, however, are worth a lot more than others. I have therefore decided to spotlight some lesser-known villains. Are they underrated gems or irredeemable losers who deserve to be forgotten? You decide! Today’s subject: the Matador!

As related in his debut appearance in Daredevil #5, Manuel Eloganto was once Spain’s most infamous bullfighter. After stopping in the middle of a bullfight to lash out at the audience, he was gored and hospitalized. (This being the ’60s, it is a strangely bloodless injury.) By the time he got out, he’d made up his mind to become a criminal. Mostly, he just threw his cape at people, blinding them long enough to allow him to get away with whatever he was doing.

Right from the start, Manuel’s arrogance is clear. Even a minor accomplishment is enough to get him monologuing about how great he is, while a single failure leaves him quaking in his slippers. He’s also not real bright: after Matt Murdock publicly insults him, the Matador decides to confront him by visiting Murdock’s law office after business hours. Somehow, he is shocked to learn that Murdock isn’t there.

Matador’s debut issue is the highlight of his career, if you can believe it. From this point on, things went decidedly downhill for our Spanish swindler.

The Matador barely shows up in this issue, but I think it’s notable for a few reasons. First, the plot: a villain named Man-Bull (self-explanatory) agrees to steal a golden bull for the Matador in exchange for enough money to leave the country. Man-Bull eventually decides he don’t need no help from nobody and turns on the Matador, seemingly killing him.

Like I said, Matador, despite spearheading this criminal operation, only appears as an unnamed, shadowy mastermind until the last page. I’m not sure how much I like that, given his love for the spotlight. On the other hand, this is the first time the comic acknowledged how goofy he is: they really lean into the “bull” theme, with both Man-Bull and the golden bull theft. Less amusingly, they give Matador a hideously written accent. And, of course, a character’s “death” is always notable, even when we know they’ll be back.

Also in this issue, we learn via news report that John and Robert Kennedy are alive and chilling in Europe. I’m sure this was followed up on in later issues, but for now it just sits there, being weird.

It took a couple of decades, but the Matador finally resurfaced in the 1990s. By this time, however, he had long since served his time and gone straight. Still, he struggled to adjust to polite society: when the Scourge, bent on murdering all criminals regardless of whether they’d reformed, tracked the ex-Matador down, she found him in a rundown apartment babysitting his widowed sister’s children. Manuel was so dejected that he didn’t even try to save himself.

Is he really suicidal, or is this his old pride preventing him from begging? Or does he just love the kids so much that he doesn’t want to risk their lives by defending himself? It’s interesting to speculate, but unfortunately, we don’t get an answer. The Scourge can’t bring herself to kill him and takes off.

The Matador’s most recent appearance was in a flashback, when it was revealed he once evicted tenants from rundown buildings for Derek Bishop (father of Kate Bishop, the future Hawkeye). As with Daredevil #129, this strikes me as incredibly out of character for a guy who was so prideful and craved the limelight so much. But now it’s even worse. Now he’s skulking in the shadows and acting as someone else’s lackey? Please.

The only in-character moment was when Kate, his young kidnap victim, immediately outsmarted him, giving the Avengers a chance to swoop in and defeat him.

A whole new Matador appeared in the “Devil Takes a Ride” storyline in 2006. Instead of dredging up Manuel again, they invented a new character. All we learn about him is that his name is Juan, he’s an orphan, and he’s one of Spain’s best bullfighters.

It feels like Marvel was trying to give the character a Dark and Edgy reboot, but this Matador’s first appearance has him bullfighting lions while dressed in a costume covered in skulls. That is not cool, that is just a different brand of hilarious.

Halfway through the storyline, we find out Juan here was really just the lackey of a lackey to the real villain, and that he’d been brainwashed into participating at all. Not exactly a promising start to a criminal career.

While the discrepancy between the Matador’s hubris and his actual talents makes for some good comedy, Marvel clearly has no idea who this character really is or what to do with him. Their brief attempt at giving him some pathos, begun in the pages of U.S. Agent, ended in Daredevil #23, when the poor guy is ambushed and mind controlled while on his way to a legit job interview. (One assumes he did not get the position.) Since then, the Matador has only appeared in flashbacks when the script calls for someone to be silly and get busted immediately. And, needless to say, the new, “serious” iteration of the character has gone nowhere.

The optimist in me wants to give Manuel another chance, since I’d kind of like to know more about his attempts at reform. But realistically, if the character hasn’t found his niche by now, he probably won’t do so anytime soon.