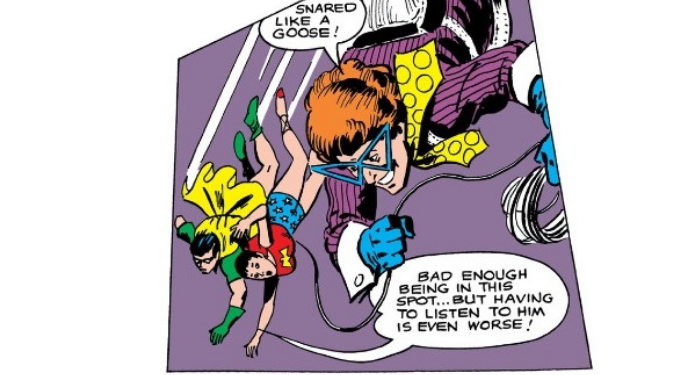 What is a superhero without a supervillain? Not much. Some supervillains, however, are worth a lot more than others. I have therefore decided to spotlight some lesser-known villains. Are they underrated gems or irredeemable losers who deserve to be forgotten? You decide! Today’s subject: Mad Mod!

You want a tour of the ’60s in one comic? Try Teen Titans #7. This baby’s got it all: our heroes saluting a giant picture of John Kennedy, a teen idol named Holley Hip, and a long-haired British fashion designer-turned-smuggler known only as the Mad Mod. Far out!

The Mad Mod just so happens to be Holley Hip’s tailor. He appears to be quite a successful designer, so I’m not sure why he risked it all by smuggling valuable jewels and chemicals from country to country by hiding them in Hip’s outfits. Simple greed, I suppose. Mod himself has no powers, except his ability to quick-change into whatever outfit he feels is appropriate for the challenge at hand.

(Apparently, he thinks a purple suit, yellow tie, and giant glasses are appropriate skydiving wear. I respect that. And he has a robot shark that he rides like a jet ski, which I also respect.)

The Titans defeat him after Mod, desperate to get a contraband-soaked suit off of Holley Hip, decides to attack in the middle of a concert. Why he couldn’t have waited for a quieter moment, I don’t know. Maybe use a little more gray matter and a little less fab next time, ducky.

Despite being the most ’60s villain of them all, the Mad Mod only made one more appearance during that decade (and it’s pretty limp, honestly). He reappeared in 1996 to menace a new group of Titans…though when I say “menace,” I mean “dress and be weirdly protective of.”

After his last ’60s appearance, the Mad Mod did jail time and, upon release, was offered employment by our old buddy (?) Loren Jupiter, a creepy rich dude with a habit of using his money to collect teenagers to do whatever he wants. Jupiter, having identified a new bunch of vulnerable teens to exploit, brings Mad Mod in as a general assistant/tag-along.

Mod also designs the new team’s costumes. They are terrible, but this is the ’90s, so it’s not entirely his fault. It’s also in this issue that we learn he has a real name: Neil Richards. I’m disappointed it’s not something comically British.

I should also point out that Richards seems considerably more concerned about the Titans’ safety than Jupiter does. In the next issue, when the training room goes haywire, Richards insists that Jupiter stop the training, but Jupiter wants to see how they handle things. The kids blow out a wall and nearly fall to their deaths. It’s a fine state of affairs when the man with the robot shark is the one with the morals.

Richards barely appears in this comic, but I put it under “notable appearances” because it marks the first and only time that the original Titans — the ones he tried to murder back in the day — encountered a post-reform Mad Mod. By this point, the new Titans were missing and Loren Jupiter had been kidnapped — by his own son Jarrod, it turns out, who was mad that his father made time for the Titans but never for him. Who could have guessed that the rich weirdo was a bad father?

Anyway, Jarrod, going by the name Haze, also kidnaps Richards, leaving him tied up in one of the Titans’ old helicopters for the original team to find as they hunt for Loren. Despite knowing that Richards has reformed, the ex-Titans are extremely suspicious and generally displeased by his presence.

Alas, the comedy potential for this is never explored. At the end of this storyline, Haze is rendered comatose and the new Titans’ token Black member dies saving Loren’s life. Loren decides that sending untrained children off to fight crime is a stupid idea and tries to disband the team by revoking his funding and support.

The kids keep up the good fight anyway, but since Richards was in Jupiter’s employ, he doesn’t get to stick around. The last we see of him is in Teen Titans #20, when he has returned to his fashion business.

Not really. He made a couple of flashback appearances in titles like Starman, but nothing substantial.

If you’re like me, you first learned about the Mad Mod not through the comics but by his appearance on the 2003 Teen Titans cartoon in the episode “Mad Mod” (well, duh). While he’s instantly recognizable — the hair, the accent — the TV show made substantial changes to the character. I don’t recall any particular emphasis on fashion, for instance. And it is ultimately revealed that he is really an old man orchestrating things from behind the scenes, like the Wizard of Oz.

I guess the logic was that no young person would be that obsessed with the 1960s, a conclusion which I and my collection of ’60s media find faulty.

Underrated gem…but only based on his first appearance.

Mad Mod’s career honestly astonishes me. He has one of the most spectacularly, stupidly entertaining debuts I have ever seen, but his swift decline into obscurity is even more spectacular. Offhand, I can’t remember a villain who was so ridiculous, so wonderful, and so underutilized all at once.

And yet, he’s spent most of his time as an ally, not an enemy. After his brief supervillain stint, the Mad Mod’s personality (if not his fashion sense) got toned way, way down. Maybe that’s just because he got so little “screen time” that he never had a chance to do anything noteworthy. In any case, it makes me sad.

Maybe this is my love of ’60s camp talking, but it would have been funnier if he’d continued to be this utterly outrageous, over-the-top person, even as he served as the new Titans’ collective conscience…though I suppose that might be dipping into stereotypes about fashion designers that the comic wanted to avoid. I really don’t know what the logic behind Mad Mod’s return was. I just think it could have been done better.

In conclusion, I really think there’s an opportunity here to resurrect the Mad Mod, if not as a long-term supporting character — good or evil — at least as an occasional presence in more lighthearted comics. It would be so easy for DC to resurrect him. Time travel is one option, but they could just as easily retool him as, say, a deranged TikToker obsessed with vintage fashion. The man is brimming with unhinged energy, and I hate to see that go to waste!