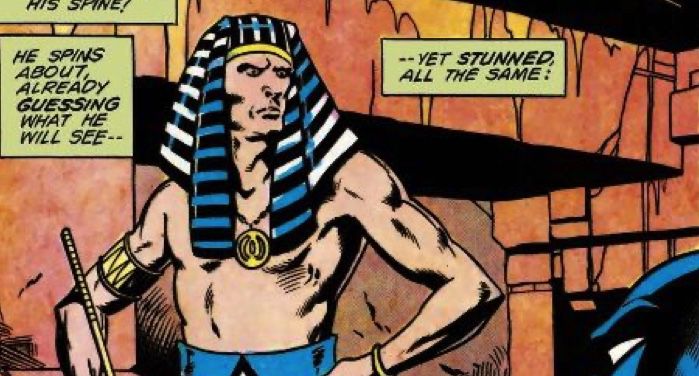 What is a superhero without a supervillain? Not much. Some supervillains, however, are worth a lot more than others. Since the last thing the world needs is another think piece on the Joker, I’ve decided to spotlight some lesser-known villains. Are they underrated gems or irredeemable losers who deserve to be forgotten? You decide! Today’s subject: King Tut!

Unlike most Batman villains, Tut did not originate in the comics. Rather, he debuted as an adversary for Adam West’s Batman on the ’60s TV series. Played by Victor Buono, William McElroy is a mild-mannered Egyptology professor at Yale…until he gets hit on the head, at which point he becomes the pompous, scenery-chewing King Tut until such time as he is concussed once again.

Like the rest of the ’60s series, Tut is absolutely camptastic. He decides that Gotham City is the latter-day Thebes and uses all manner of ridiculous ploys to take over as ruler, including but not limited to torturing Batman into doing the Batusi at his command.

Now there’s a man who loves his job.

For a long time, Tut’s TV appearances were his only appearances. It took a good 25 years for a character even remotely resembling him to appear in the comics, starting with…

In Detective Comics #508, Selina Kyle (AKA Catwoman) is kidnapped by Gregory Griffin, an Egyptologist who has recently decided he is the pharaoh Khafre. Khafre’s queen looked a whole lot like Selina, hence the kidnapping. Batman, obviously displeased, tracks them to Griffin’s secret headquarters inside the Sphinx.

Griffin is allegedly killed by his jackals in the end, but Batman never finds a body, so the guy could still be out there. It’s also interesting that Griffin zeroes in on Catwoman: in the ’60s show, Tut once kidnapped a woman named Lisa Carson to be his Cleopatra. (Yes, I know that’s historically inaccurate, but that’s part of the fun.) Carson was played by Lee Meriwether, who also played Catwoman in Batman: The Movie in 1966. But we’ll hear more from Miss Carson in a second.

In 2009, Tut finally made his official comics debut. I vaguely remember being excited about that, until I saw what they did to him.

This Tut blends elements of both McElroy and Griffin. His real name is Victor Goodman (an obvious allusion to actor Buono), and he is a museum curator (like Griffin). He quarrels with the board about bringing a Tut-themed exhibition to crime-prone Gotham, during which he hits his head. Like McElroy, this triggers his transformation into King Tut. Unlike McElroy, however, this Tut likes to spew vague riddles as he gruesomely murders his former colleagues. The Riddler, annoyed by this impingement on his gimmick, all but forces Batman to accept his assistance in bringing Tut down.

Why did DC butcher Tut’s character in this way? I have no clue. I can’t even argue that this very dark interpretation is because comics hate fun: the bits with Riddler and Batman are pretty funny. So I don’t know what to make of this grisly version of the hammiest character on a show full of hams.

Issue 28 ends with one of Tut’s would-be murder victims, Leigh Carson (she’s back!), deciding that Tut had the right idea after all and rechristening herself as Ankh. Surprisingly, only one comic followed through on this premise. And it’s the last one you’d expect.

Yup, the comic that is explicitly based on the gooftacular ’60s series is the one that allowed Leigh/Lisa Carson to spread her villainous wings. Batgirl takes it upon herself to investigate an attack on millionaire playboy Bruce Wayne and winds up in Carson’s clutches.

Tut himself does not appear in this issue, but he does show up elsewhere with the kinds of off-the-wall schemes he concocted on the show. In one issue that is sure to age well, he discovers an ancient Egyptian virus and infects all of Gotham with it, turning them into zombies. Batman and Robin only escape infection by wearing their masks properly.

Not really. Victor Goodman made a couple of cameos in the comic Harley Quinn, and a more ’60s-looking Tut cameoed in the cartoon series Batman: The Brave and the Bold. A character named King Tut showed up in the Bizarro miniseries as the pushy proprietor of King Tut’s Slightly Used Car Oasis. This Tut had nothing whatsoever to do with any of the others, but the character design is obviously based on Buono and, most of all, he is FUN.

King Tut’s greatest strength is his boisterous, comedic personality. (It sure isn’t his ability to come up with logical schemes). He works best when played by a commanding actor like Buono, or when written by a writer who isn’t afraid to go all-in on the camp. Take that away and he’s just a generic, half-naked weirdo in a mask. Note that both Griffin and Goodman needed an assist from an established character (Catwoman and Riddler, respectively) to carry their stories and keep things interesting.

But when Tut is written well, he’s written really well. For that, he deserves a second look from both comics readers and TV viewers.

For even more deep dives into comics baddies, see: