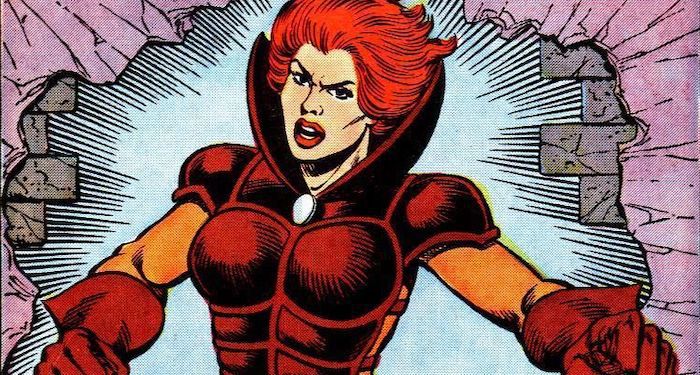 What is a superhero without a supervillain? Not much. Some supervillains, however, are worth a lot more than others. I have therefore decided to spotlight some lesser-known villains. Are they underrated gems or irredeemable losers who deserve to be forgotten? You decide! Today’s subject: Man-Killer!

First appearing in Marvel Team-Up #8, Katrina van Horn was once a talented skier who challenged a sexist fellow athlete to a skiing contest. The dope cut in front of her, sending them both off a cliff. The male skier was killed, while Katrina’s devastating injuries were treated with a strength-enhancing exoskeleton from a group of violent feminist extremists. I doubt that was FDA approved, but okay.

Katrina then took the name Man-Killer and was trained to use her powers in rather vague schemes designed at…crushing the patriarchy? Getting revenge on men? It’s not clear. What IS clear is that her original outfit is laughably heinous.

Gee, you think she’s a woman? I can’t tell from that dialogue and the giant charm dangling from her belt.

At the end of this baffling and horribly dated debut, Man-Killer learns her exoskeleton was made by A.I.M., a group of villainous — and, more importantly, male — scientists. This hypocrisy is too much for her to comprehend, but that hardly means her career was over. In fact, most of her appearances over the next few decades involved her working for male villains while spouting misandrist insults the way Spider-Man spouts quips.

One of the groups that Man-Killer worked for was the Masters of Evil. They tussled repeatedly with the Thunderbolts, a group of ex-supervillains seeking to reform. After a particularly severe defeat, the Masters were arrested or went underground. Man-Killer took the alias Wilma (a cheeky reference to Cherokee Nation chief Wilma Mankiller) and got a job at a bar.

“Wilma” was quickly discovered by Atlas, one of the Thunderbolts. Atlas, figuring that maybe Man-Killer just wanted a shot at redemption too, kept her secret. But, when the bar was attacked and Atlas asked for Man-Killer’s help, she made her allegiance plain with this brutal sendoff:

In later issues, she rejoined the Masters of Evil, only to realize that a previous boss had infected her with a deadly biotoxin. She and a few of the other Masters agreed to work with the Thunderbolts to neutralize the toxin. It was during this time that she took the name Amazon.

In these issues, Amazon made it clear that she no longer wanted to be known as Man-Killer because the name was too “mascu-centric.” I don’t know what that means. I assume the point is that, even though she still doesn’t like men, she no longer wants her whole identity to revolve around that fact. Character development!

After a fight with an unusually sexist Spider-Man, Amazon agrees to participate in an underground fight ring in exchange for decent legal counsel. Amazon isn’t the only B-grade ex-villain in this fight ring, and she decides to take on a leadership role for a change by recruiting a few of them for her own purposes. It seems she did learn one thing from her time with the Thunderbolts: the value of teamwork!

Her plan to team up with other Spider-Man villains to get revenge on Webhead never comes to fruition: she changes her mind about the whole thing, and then the series ended (temporarily).

Alas, Katrina’s brush with being interesting did not last long. After a stint with Norman Osborn’s Fifty-State Initiative (intended to replace the regular super-teams post-Civil War), she rejoined the Masters of Evil. By this point, she had re-adopted the name Man-Killer also.

What was going on in Katrina’s head? Why the reversion? I suspect Marvel just didn’t care much about the character. This is supported by what happens next: Kobik, a Cosmic Cube/Tesseract in a little girl’s body, throws a tantrum, causing a magical storm so powerful that the Masters and the Thunderbolts are both endangered. Man-Killer tries to save herself but is betrayed by her own teammate, Whiplash.

So maybe at this point you’re thinking “Yeah, Man-Killer is a pretty bad stereotype of an angry, man-hating feminist, but at least she’s not a lesbian too! Ha, ha!!”

I have some good/bad news for you, compliments of Thunderbolts #71. It’s incredibly vague, but still.

While I am all for more queer rep in comics, maybe choosing the self-professed man-hating supervillain as your latest gay character was not a great decision?

I also think it’s worth mentioning that, aside from an errant colorist or editor, the creative teams on all of Man-Killer’s stories are comprised entirely of men.

Normally, this is the spot where I would declare a character a “loser” or an “underrated gem,” but I’m not sure my feelings about Man-Killer fit either of those categories.

I’m positive that there’s an interesting story to be told about a radical feminist supervillain, but not for one second do I trust Marvel to do it right. Man-Killer started out as a cardboard cutout of a feminist and ended up just a cardboard cutout. In between, she got something vaguely resembling character development that no one seemed interested in fleshing out.

In Thunderbolts #10, two issues before her death, Man-Killer gives Atlas a chance to join the Masters of Evil…by threatening to kill him if he doesn’t, but still, she showed a modicum of mercy towards a man whom she previously left to die in a fight. Whether she genuinely likes him or just respects their long mutual history, that’s development! That’s great! And Marvel did nothing with it.

In her last few appearances, Man-Killer dialed down the misandrist rhetoric a whole lot. While this is not a bad thing, hating men was pretty much her only personality trait. Marvel took away her one defining feature and didn’t replace it with anything, leaving her as little more than generic muscle. Or canon fodder. In retrospect, it’s not surprising that she died and stayed dead…so far, anyway.