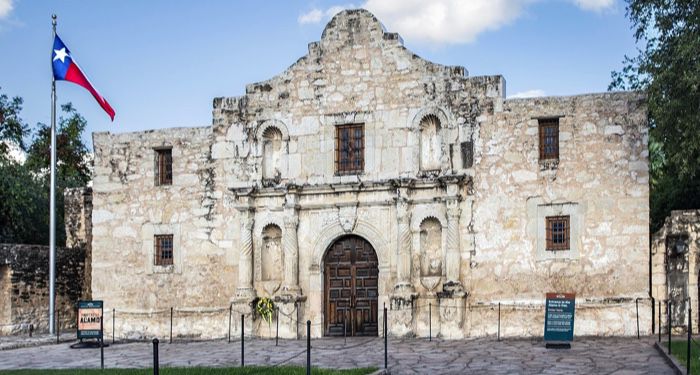 Amid a state-wide energy disaster and a country-wide call for challenging Critical Race Theory — an academic framework examining the ways race has been embedded systemically throughout all aspects of American history — Texas’s Governor Abbott (R.) canceled a book event which explores the racial history of The Battle of the Alamo.

The Bob Bullock Texas State History Museum, located immediately across the street from the Texas State Capitol in Austin, invited the panel of authors of Forget The Alamo: The Rise and Fall of an American Myth to discuss their work Thursday, July 1. Forget The Alamo is a critical examination of the mythology surrounding the Alamo, one of Texas’s proudest cultural and historical battles and subsequent “Shrine of Texas Liberty.”

Though Abbott himself has not commented on the event’s cancelation, Lieutenant Governor of Texas Dan Patrick confirmed the move, explaining that the board of directors — of which Abbott is part — were disinterested in a “rewriting” of Texas history.

“As a member of the Preservation Board, I told staff to cancel this event as soon as I found out about it,” Patrick wrote on Twitter. “This fact-free rewriting of TX history has no place @BullockMuseum.”

Authors Bryan Burrough, Jason Stanford, and Chris Tomlinson’s book challenges the mythology of the Alamo and its role in Independence from Mexico, positing that its origins were also in preserving slavery. Celebrating the Alamo, the book explains, has a history in upholding whiteness.

“Lt. Gov, Dan Patrick takes credit for oppressing free speech and policing thought in Texas,” he wrote. “@BullockMuseum proves it is a propaganda outlet. As for his fact-free comment, well, a dozen people professional historians disagree.”

The Bullock Museum is overseen by the State Preservation Board, a committee comprised entirely of white men, with one woman serving as a citizen member. The Board is Republican led and loaded; history which doesn’t fulfill the accepted narrative has slim chance of being shared or preserved.

Texas is among a number of GOP-led states seeking to change how race is discussed in classrooms. Last month, Texas lawmakers restricted the manner in which teachers could discuss current events — including race — in classrooms, and their upcoming Legislative session on July 8 will go further to abolish discussing race in classrooms.

Despite the popularity of the phrase “Critical Race Theory” among these politicians, Critical Race Theory is not being taught in classrooms. It’s a deeply academic discipline, but choosing to use that terminology has fueled conservative fire for eliminating any and all educational discussion of race. Abolishing anti-racism and social justice discussion from the classroom, which is what is being taught, doesn’t roll so nicely off the tongue nor engage the outrage of white conservative Americans.

Texas legislators also created the 1836 project, with a goal to promote “patriotic education” to state residents. Texas’s education requirements in social studies (which includes history) are already among the lowest for high school graduation. The 1836 project is in direct opposition to the New York Times’s 1619 project, which explores the prominent role of slavery through American history.

Jason Stanford, one of the coauthors of Forget the Alamo, believes the cancelation of the book event at the Bullock Museum is the first step toward enacting 1836 project.

“They’re insisting so vehemently on a version of the past that never existed,” he said in an interview. “There’s no reason conservatives can’t accept the past with open arms and say, that’s where we started, here’s where we’re going. There’s no reason they can’t tell the story of Texas as a redemption story, and that we’re still an imperfect union ever becoming more perfect.”

But not all politicians are happy with the decision to cancel the event. Former Land Commissioner, Jerry Patterson, whose prior role involved jurisdiction over The Alamo, believes the event should have proceeded as planned.

“It would have been better if they had been asked hard, specific questions and been forced to answer them. And in that case, they should have been allowed to be at the Bullock,” he said.

Just as Juneteenth — the day troops arrived in Galveston, Texas, two full years after the Emancipation Proclamation, to inform enslaved people of their freedom — earns distinction as a federal holiday, more and more states are amping up their anti-anti-racism campaigns. The decision to cancel the event amounts to a challenge for freedom of speech and showcases the lengths to which conservative politicians seek to whitewash the events of history.

This cancelation of an event meant to further the discourse related to the real history of The Alamo and Texas more broadly instead falls victim to a continued white supremacist agenda.

Forget The Alamo has garnered positive reviews from The New York Times, The Houston Chronicle, and The Wall Street Journal, among others.