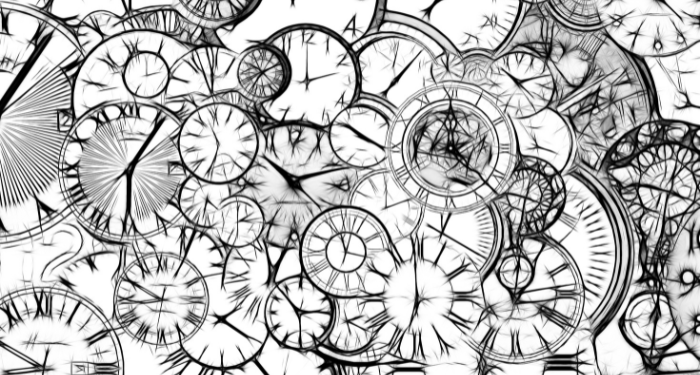 If I tried to list all of the stories that demonstrate why mucking about with time is a bad idea, we’d be here a while. The quintessential example may be A Sound of Thunder by Ray Bradbury, which I (and you, probably) read back in college. It’s not that long, but it demonstrates clearly and effectively why even the smallest of past events can never and should never be changed, no matter how painful they are.

It seems your average superhero skipped class that day. And, thanks to their special powers, superheroes can unfortunately mess around with time to their heart’s content. Their moral code usually prevents them from doing so, but every once in a while, an extreme situation comes along that they feel “requires” intervention. Whether it really does or not is up to the reader, but what’s clear is that their meddling usually makes things worse.

But what can you do after messing with the past? If you try to undo what you did, that’s just messing with the past some more, and that’s bad, isn’t it? (I am looking at you very specifically, TV Version of Barry Allen.) Here are five heroes who saw the chance to rearrange a few of life’s Jenga pieces and took it.

Days of Future Past is one of Marvel’s most famous examples of timestream-meddling. The X-Men are minding their own business for a change when an adult version of their youngest member, Kitty Pryde (now called Kate) comes back to tell them the future is overrun by mutant-hunting Sentinels, everyone is dead, and could they maybe prevent the assassination that sets all these events in motion, please?

Kate-in-Kitty’s-body manages to stop the assassination, but whether this results in a non-dystopian future is never shown. The fact that we have passed the year, 2013, when this was all supposed to take place is probably a good sign, though.

Mess Up an Entire Universe

Using his superspeed, Barry succeeded in undoing his mother’s murder, at everyone else’s expense: Bruce Wayne died and his father Thomas became Batman, Wonder Woman and Aquaman started a war, the would-be Superman was a prisoner…even after Barry set things right, some alterations remained, sparking the New 52 reboot that fans totally loved and had no problems with whatsoever. Thanks, Barry.

Deus Ex Machina Your Way Out of It

In Ms. Marvel’s defense, she didn’t actually mean to break time in the miniseries Avengers: Back to Basics. She was quite innocently using a pair of goggles gifted her by the Vision to experience the Avengers’ early days for herself when Kang the Conqueror tampered with them and sent her back in time.

Ms. Marvel immediately blabs half the team’s secret identities and joins the original Avengers. It’s all fun and games until she watches her mother get hit by a bus and realizes Kang is behind everything. Fortunately, Ultra-Powerful Future Ms. Marvel is there to save the day — and wipe her younger self’s memory of this unfortunate incident.

While her daughter Diana was busy being a bona fide Greek goddess, Hippolyta stepped into the role of Wonder Woman — and it didn’t take her long to louse things up. In Wonder Woman #130, she and Jay Garrick, AKA the Flash, head back into the past to rescue Jay’s younger self. Unfortunately, their shenanigans give the Third Reich a second chance to win World War II. Oops.

Hippolyta and the Justice Society of America team up to stop the threat, and they succeed. Wondy then decides to stay in the ’40s for a while. Thus did DC try to reconcile the fact that Wonder Woman had been running around having adventures in the Golden Age despite a more recent retcon claiming she only arrived in Man’s World in the early ’90s.

Gwenpool originated from the “real world,” not the Marvel universe, so she doesn’t have to follow the same rules as everyone else. She uses this ability to wander outside the panels of the comic, escape death traps, and defeat supervillains — but there’s a dark side to her power, too.

A future version of Gwenpool used her time-warping powers to become Marvel’s greatest villain, prompting a small band of surviving heroes to try to stop her. Gwenpool herself, despite knowing that villainy is her one shot at becoming famous enough to save her book from cancellation, refuses to go down that road. She puts everything back the way it’s supposed to be and accepts her fate — an act so uncharacteristically selfless that no time shenanigans will ever erase it from fans’ hearts.

Can’t get enough #SuperheroProblems? Check out: