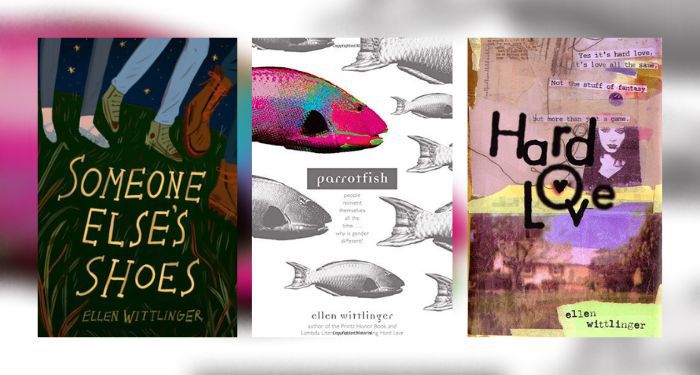 On the same day news broke about the loss of YA author Marcus Sedgwick, the YA community lost yet another legend in the field. Ellen Wittlinger, who wrote groundbreaking, hard-hitting realistic YA featuring queer characters in an era where such stories were exceedingly rare, died November 17, 2022.

Wittlinger’s career began as a playwright in the 1970s and 80s, after she earned her MFA at the University of Iowa Writers Workshop. Though she continued to write plays and be active in the playwriting world, she found a true home with her writing skills and writing voice in YA.

Hard Love, published in 1999 and her third novel, was a finalist for YALSA’s first ever Printz Award. It was also a Lambda Literary Award winner, and it earned starred reviews and critical acclaim from several major outlets. The story follows a boy and a girl who connect over zines and, through the course of their friendship, navigate parental divorce, sexuality, and what it means to find oneself.

“Maybe the most important thing that winning the Printz Honor Award did was make me feel legitimate in my own eyes. Even though it was my third YA novel, winning a major prize gave me a feeling of acceptance in the field that I hadn’t had before. Suddenly I felt confident about saying, “Yes, this is what I do–I write novels for teenagers,”” said Wittlinger in an interview with Cynthia Leitich Smith in 2005.

Central to Wittlinger’s books were teen characters navigating emotionally-complex situations, and she did not shy away from depicting the dark parts of the adolescent experience. Her stories featured characters who were conscious of class, as well as social realities. Wittlinger published throughout the early 2000s, during a time when queer YA — particularly openly queer YA — was rare.

Wittlinger is maybe best known for her book Parrotfish, one of the first books in YA featuring a trans main character. Published in 2007, the book follows Grady as he comes out as transgender and begins to transition, despite heavy opposition from loved ones. The book earned a Lambda Literary Award nomination. Parrotfish was a rare story giving power to trans teens in a time when such stories were not being published, and ten years after publication, Wittlinger and her editor updated the book to use more accurate language around the trans experience. Though a product of its 2007 publication, many cite it as the first time they saw themselves reflected in books written for them.

Tributes to the author came in over social media upon learning the news.

Other books by Wittlinger include What’s In a Name, Zig Zag, Someone Else’s Shoes, Love & Lies: Marisol’s Story, Local Girl Swept Away, and more.