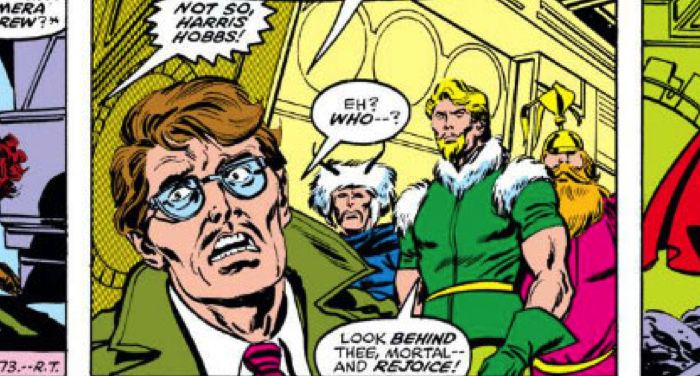 Harris Hobbs is a reporter in the tradition of Lois Lane: he’ll do anything to get the story, even if it means endangering himself and depending on the local superhero’s good graces for survival. He debuted in 1965 in Journey into Mystery #114–115, when Thor’s physician alter ego had to patch him up after a banana peel-related accident.

That pretty much sets the tone for this guy.

Undeterred by the injured arm, Hobbs continues to pursue his big story, about a new villain soon to be called the Absorbing Man. You will be shocked to know that Hobbs immediately gets into trouble, despite the fact that he brought along some dynamite “in case” he needed it. I’m not sure why he thought dynamite was a better defensive weapon than, I don’t know, a gun, but that’s just the kind of guy he is.

He is also the kind of guy who, in his next appearance, would kidnap Thor’s then-love interest Jane Foster to trick Thor into becoming Donald Blake, his other identity, in front of Hobbs, thus compromising his secret identity and providing Hobbs the material to blackmail a tell-all exclusive out of Thor. Way to do old-school Lois proud, Hobbs!

Needless to say, Thor is SUPER upset about this and scares the bejeepers out of Hobbs. He threatens to leave him back in Earth’s prehistory on the premise of “I won’t hurt you, but this T-rex might.”

Hobbs agrees to destroy the photo he took of Thor’s transformation…as long as Thor takes him to visit Asgard. Thor so admires the gall of this stupid, stupid man that he agrees. I guess we’re just ignoring the fact that he kidnapped a woman and should be very incarcerated?

Aside from a brief cameo in 1970 in Thor #182, Hobbs would not appear again until 1978 in Thor #272. Hobbsie, as he calls himself precisely once before dropping the ill-advised nickname, has not had an easy time of it since his jaunt to Asgard. After their trip, Thor erased all knowledge of Asgard from Hobbs’s mind. This begs the question of why Thor didn’t go full Identity Crisis and erase Hobbs’s knowledge of his secret identity in the first place, avoiding the need for the field trip to the Cretaceous period. However, since I don’t want Thor to go full Identity Crisis on anyone, we’ll leave that question unanswered.

Hobbs was plagued by nightmares for months (thanks to Loki’s machinations, as we later learn), until a session with a psychiatrist undid the mindwipe. By this point, Hobbs has left the newspaper business and gotten into television, but he’s still the same old knucklehead: he promised his bosses that he’d get permission to shoot a TV special in Asgard, and if he fails, he’s fired! Wow! This guy has no idea when to quit!

Thor is not unsympathetic to Hobbs’s plight, but he doubts Odin Allfather has any interest in being a TV star. This leaves a despondent Hobbs vulnerable to an offer of free transport to Asgard from a certain god of mischief…

Hobbs and his film crew arrive just in time for Ragnarok, the prophesied end of the world. Well, that’s sure to get ratings!

Though Hobbs orchestrated this little adventure, it’s his cameraman, an incel named Red Norvell, who ends up playing a starring role. Angered by Lady Sif’s refusal to dump Thor for him (but he’s such a nice guy!), Red accepts advice from Loki, goes to Thor’s house, and steals enchanted armor that effectively turns him into a god. This despite the fact that he just got through watching Loki give a long-winded, deranged speech about how he’d rather destroy Asgard than let anyone else rule it. Smart man, our Red.

Red accidentally kills his sound man and not-accidentally kidnaps Sif. He eventually pulls his head out of his armored butt just enough to save the world by sacrificing himself. This leaves Hobbs as the sole survivor of this misbegotten ratings grab. Thor brings him back to Earth and leaves him on a rooftop with his friends’ corpses. Ouch.

Despite all the filming Hobbs did, the footage was apparently unusable, and the proposed special never aired. Hobbs wouldn’t appear again until Thor #394, by which point he is described as an “ex-newsman” and is scorned as a joke among those who remember him. In this issue, a screenwriter has been hired to write a Thor movie, and she goes around New York interviewing everyone who has ever had contact with Thor. She does not contact Hobbs; on the contrary, he breaks into her hotel room just to tell her that the Asgardians are “bad news” and that she should abandon the movie project. Oh, Hobbsie.

This is an interesting if depressing look into how Hobbs’s association with Thor has affected him, but I can’t help wondering about more concrete matters. How long ago was he fired? What has he been doing for a living since then?

Even more depressing, this is, chronologically, Hobbs’s last appearance. He showed up twice in the ’90s: first in Marvels, then in Marvel: Heroes and Legends. However, Marvels is a retelling of the classic Marvel heroes’ early days set in the original time periods (Marvels #2, in which Hobbs appears, is set in the ’60s), and Marvel: Heroes and Legends #1 is a retelling of an early Avengers issue. As of right now, the end of Hobbs’s story has him presumably unemployed and so bitter about his experiences that he breaks into a stranger’s hotel room to rant about it. Quite the comedown from his glory days as a dynamite-slinging ace reporter.

I want to dislike Harris Hobbs because he’s pushy and horrible. But I can’t. He is pushy and horrible in the exact same way that I find so entertaining in old-school comic book characters, especially — as I noted before — Silver Age Lois Lane. It’s impossible to take him seriously, so I can’t be mad at him. I will even admit to a mild fondness for this complete tool of a man.

Does that mean I think Marvel should bring him back? Ha, no. Not only unless they team up with DC for a very cheeky look at the journalism school misadventures of Lane and Hobbs. Hey, we know nothing about Hobbs’s early life. You can’t prove it didn’t happen.