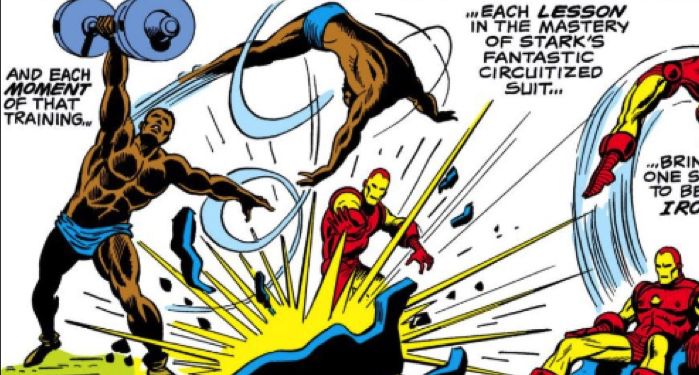 Eddie March grew up in either a Midwestern city called Bay City, a Californian city called Bay City, the Bronx, or some combination thereof: different issues give different information. What we do know is that he grew up in the slums and literally fought his way out, becoming a professional boxer. He acquired the nickname “Iron Man” due to both his toughness and the fact that he was an Iron Man fanboy. In fact, this is how we — and Tony Stark — first meet Eddie in Iron Man #21: at a boxing match. Eddie wins the bout, but the price is steep: he has developed a blood clot in his brain that could kill him if he ever fights again.

Around this time, Tony Stark was having his own medical problems. He’d recently had a synthetic heart implanted, but too much stress could weaken it and kill him. Tony decided that the best thing to do was to find a replacement Iron Man, someone who was strong enough, brave enough, and compassionate enough to carry on his legacy. You know where this is going.

Sadly, Eddie only lasted for one fight before that pesky blood clot got the best of him. He did survive, and seeing Eddie’s bravery gave Tony the courage to put the armor back on himself, so it wasn’t a total disaster.

With Eddie’s fighting days now most definitely over, Tony gave him a job at the charitable Iron Man Foundation. After that, Eddie disappeared from comics for a few years. He resurfaced in Iron Man #63, when he popped in to ask for Iron Man’s help with finding his missing brother Marty, a soldier who’d gone MIA in Vietnam. First, however, Eddie decided to put on the Iron Man suit to protect the real Iron Man from an imminent defeat. “Iron Man” March rides again!

And then he was immediately possessed by an alien and beaten up by a confused Thor. This time, Eddie’s injuries were so bad that he needed help from a machine called an Enervator to pull through. Unfortunately for him, anyone exposed to the Enervator’s rays gets turned into a mindless monster called the Freak. And you thought dropping your phone into the toilet constituted a bad day.

Iron Man turns him back to normal, but Eddie’s injuries are so bad that he is now paralyzed. Meanwhile, Iron Man’s love interest manages to find Eddie’s brother Marty, but Marty decides to stay in Vietnam rather than come home. Iron Man remarks that he doesn’t think Eddie will understand that decision. We never get to find out if that’s true, because Eddie has already disappeared from the book again.

Eddie’s next appearance came a few years later, when Stark International was taken over by a supervillain. S.H.I.E.L.D., a government organization for whom Stark used to make weapons, is concerned about the effect the takeover will have on national security. So they gather up a bunch of Tony’s old allies to help rectify the situation. Eddie, now inexplicably cured of his paraplegia, was among those S.H.I.E.L.D. recruited. Only after this storyline ended, just as Eddie was about to ride into the sunset for a third time, do we get a throwaway line explaining his recovery.

This dialogue doesn’t sound like an afterthought at all.

By the time Eddie returned for his final appearance, Tony was the one in the wheelchair, having been shot by a deranged ex-girlfriend. Eddie was invited to Tony’s surprise birthday party and was thus conveniently in town when Tony needed help defeating Ultimo in Iron Man #300.

Eddie’s the one in the back in the super-vintage armor. He was knocked out of battle and into the hospital almost instantly. Presumably, he recovered, but he hasn’t been seen since, so draw your own conclusions.

Tony more than once referred to Eddie as a close friend, but you can tell from the way he kept vanishing into the ether that he never gained traction as a character like, say, Pepper Potts or James Rhodes did. I think Marvel meant well with this character, but he really only seems to show up when the plot calls for a friend of Iron Man’s to get batted around.

While it’s a shame that Eddie March never got a chance to shine, he did make an important contribution to comic book history. As far as I’ve been able to verify, Eddie March is the first person of color to ever take on an established hero’s identity. For perspective, we wouldn’t get a Black Green Lantern until John Stewart debuted in 1971, and a Black man wouldn’t pilot the Iron Man armor full time until 1983, when Rhodey assumed the role in Iron Man #170. Eddie broke that barrier, albeit for the briefest of moments, back in 1969. And that’s not nothing.