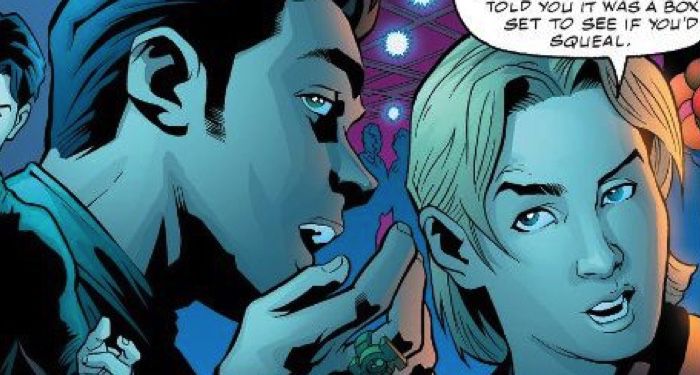 So who is Terry Berg?

We don’t know much about Terry Berg’s childhood. By the time he debuted in Green Lantern #129, he was 16, living with his parents in Maplewood, New Jersey, and studying art. In accordance with his area of study, he became an intern for Feast, a New York–based entertainment magazine whose HR nightmare of an editorial staff soon hired Kyle Rayner (AKA Green Lantern) as their cartoonist, mainly on account of his cute butt. One of the many perks of Kyle’s new job was being assigned an assistant. That would be Terry Berg.

Kyle, sensing loneliness behind Terry’s outgoing exterior, made an effort to be friendly. Terry, in turn, seemed to really like Kyle.

Terry reacts very badly when Kyle gets back together with his old girlfriend, to Kyle’s brief confusion. Kyle is apparently the last person in the comic to realize that Terry has a giant crush on him. Once he finally gets the hint, he gives Terry a schmaltzy speech about how there’s nothing wrong with being gay, and how much he values Terry as a friend. Considering this is 2001, things could have gone a whole lot worse.

For his part, Terry isn’t sure if he’s gay: he’s still working things out. In the next issue, we see him hanging out at the local gay and lesbian youth center, but it’s not clear if this means he’s decided he is definitely gay or if this is part of the discovery process. Either way, as Kyle points out, it’s much healthier for Terry to spend time with kids his own age than to obsess over a grown man.

And this is where things get worse.

In Green Lantern #140, Terry celebrates his 17th birthday. Everything seems to be going fine: he’s got a maybe-boyfriend, “understanding parents,” and lots of friends. He even made friends with Kyle’s girlfriend! Look at the fun they all have!

But in the world’s fastest retcon, a mere three issues later, Terry tells Kyle that his parents just found out he’s gay and pitched a fit.

What happened to those “understanding parents?” No idea. Sacrificed for drama, probably. Or perhaps an editorial mix-up, as happened with Dinah “Heterosexual to the Bone” Lance. Anyway.

Things get even worse in Green Lantern #154, a Very Special Episode kind of issue in which Terry is beaten into a coma by a trio of homophobes. The attack makes headlines around the country. Then-president Lex Luthor even makes a public statement condemning homophobia, which is further proof that Luthor, despite being a literal supervillain, was somehow a better president than the guy America just got rid of.

I appreciate what the creators were going for, but I’m not sure how well this storyline (aptly named “Hate Crime”) has aged. Using the suffering of minorities to advance the hero’s plot is neither accepted nor acceptable anymore, and that’s really what happened here. This event served just two purposes: one, to explicitly state that homophobia is bad; and two, to give Kyle a reason to hare off to space for a while so that he doesn’t have to deal with scummy humans.

Terry’s beating is used as an opportunity to showcase Kyle’s pain and to start a new phase in his career. We get maybe two scenes of Terry reacting to his trauma, including one where he tearfully asks Green Lantern John Stewart to teach him to fight — a request that we never follow up on. Heck, when Terry is in the coma, Kyle finds out that Terry knows he’s Green Lantern. Do we get to see how that conversation went down? Does Kyle even stick around to help Terry through his recovery? No. Instead, Terry has to take Kyle to task for abandoning Earth. The traumatized, injured child is too busy coaching the healthy, grown man through his pain to receive succor for his own.

After he gets better, Terry moves in with his boyfriend, David. (I guess they’re 18 now?) He uses all the publicity surrounding his attack to found the Human Tolerance League. It’s not real clear what they do, but it does speak to Terry’s strength. He’s certainly putting his money where his mouth is: after calling out Kyle for running away at this tangible reminder of Earth’s suckiness, he’s putting real (if vaguely defined) effort into changing the world for the better.

Terry made his last appearance in Green Lantern #175, after which he left to join the League’s PR department in Los Angeles. It’s a sloppy sendoff in multiple ways. First, Terry’s mother comes to his going-away party to apologize for being a homophobe…but she gives her big emotional speech to David. We never see her reconcile with her own son.

Second, the very last page features a shocked Terry with a Green Lantern ring that has just materialized on his finger. We don’t get the explanation until next issue, after Terry has left. Instead, we have to sit through Kyle expositing about how he placed himself inside the ring and teleported into Terry’s kitchen to escape from certain death (long story). He also mentions buying Terry a pizza in apology, but we don’t get to see them say goodbye.

Putting Terry on a bus feels like just another way to advance Kyle’s plot. After months in space, he finally returns to Earth only to realize that everyone has moved on without him. Terry’s unceremonious departure gives him another reason to stand in the rain looking sad.

In case you couldn’t tell, I really, really like Terry Berg. In what little time we get to spend with him, he seems like a fun guy. Unfortunately, several factors hindered his character development.

One: as a gay character in the early 2000s, he is very much A Gay Character, not a character who is gay. I don’t know how many of you have watched Ellen all the way through, but the season after she came out (which turned out to be the last) was very different from what came before. It became exclusively about Ellen’s sexuality, at the expense of longtime supporting characters and non-gay-related storylines.

Something similar happens with Terry. He came out only four years after Ellen did, and the minute he did so, almost every interaction and conversation somehow worked in his sexuality (or the effects thereof, e.g. the beating). The idea of having an out character was still so new that creators either didn’t know how to handle it or felt the need to spotlight it. This isn’t really an excuse for Terry’s treatment — the Pied Piper came out in the ’90s and remained a well-rounded character — but it’s important to keep historical context in mind.

Two: Terry didn’t know about (or pretended not to know about) Kyle’s secret identity for quite a while. Obviously, this limited the chance for him to bond and interact with Kyle. By the time he was brought into the loop, Kyle was out in space.

Three, and this is the biggest problem of all: the writers treat Terry Berg as a plot device to advance Kyle’s story. Other side characters get independent subplots; after he comes out, Terry’s every move is orchestrated with Kyle Rayner, not Terry Berg, in mind. As a result, there is a ton of untapped potential in this character, and I genuinely hope he comes back. Maybe next time the artists can give him a consistent hairstyle.