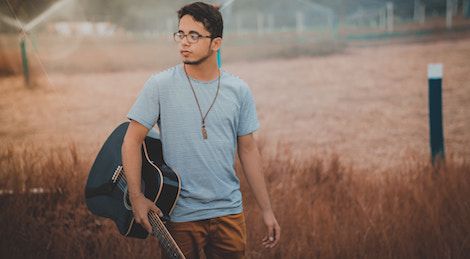 Fun fact: April is International Guitar Month. The event began back in 1987 as a way to celebrate guitars and associated products; it was, like many celebrations, a way to drum up consumer interest in the musical interest. But as the event has grown and matured, it’s become a means of celebrating the folks behind those guitars, too.

Music has been a topic of YA interest since it began. Eric Smith and I dove into this more deeply in an episode of Hey YA, and more specifically, how the appearance of music in YA tends to come and go in waves, and yet speaks to the passion that teens have for music.

Today, in honor of guitar month and teen music lovers, a round-up of teens in YA who play guitar. How great would getting a soundtrack to listen to along with these books be? 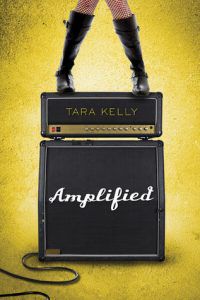 When privileged 17-year-old Jasmine gets kicked out of her house, she takes what is left of her savings and flees to Santa Cruz to pursue her dream of becoming a musician. Jasmine finds the ideal room in an oceanfront house, but she needs to convince the three guys living there that she’s the perfect roommate and lead guitarist for their band, C-Side. Too bad she has major stage fright and the cute bassist doesn’t think a spoiled girl from over the hill can hack it… 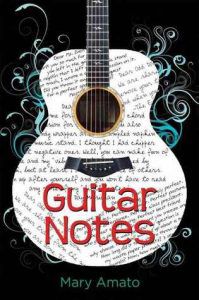 On odd days, Tripp Broody uses a school practice room to let loose on a borrowed guitar. Eyes closed, strumming that beat-up instrument, Tripp escapes to a world where only the music matters. On even days, Lyla Marks uses the same practice room. To Tripp, she’s trying to become even more perfect—she’s already a straight-A student and an award-winning cellist. But when Lyla begins leaving notes for him in between the strings of the guitar, his life intersects with hers in a way he never expected. What starts as a series of snippy notes quickly blossoms into the sharing of interests and secrets and dreams, and the forging of a very unlikely friendship. Challenging each other to write songs, they begin to connect, even though circumstances threaten to tear them apart. 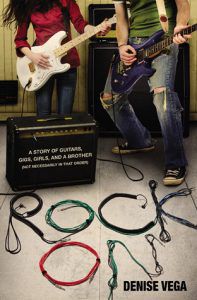 Rock On by Denise Vega

Ori Taylor is the lead singer, guitarist, and songwriter of the Band To Be Named Later, a garage band he started with his friends. After years of being known only as the kid brother of sports star Del, Ori is looking forward to stepping out of his older brother’s shadow, learning to perform in public, and rocking the Battle of the Bands contest. Oh, and maybe finally working up the nerve to talk to a girl in person instead of just over e-mail. But when Del suddenly returns from college, he expects Ori to step back into his role of little brother, just when Ori is starting to come into his own.

With his confidence wavering, will Ori be able to overcome his stage fright and lead the band to rock glory? Will the Band To Be Named Later ever get a real name? Will their best performances remain in the garage? 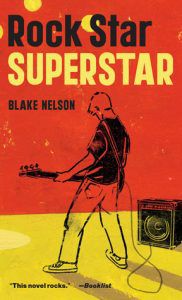 Music is Pete’s life. He’s happiest when playing his Fender P-Bass. He doesn’t care about prestige or getting girls; it’s the quality of the music that matters. Then he meets the Carlisle brothers. They can’t sing and they can barely play, but somehow they have a following. Pete can’t resist, and he joins The Tiny Masters of Today.

When the band gets a chance at real stardom, Pete wonders if he’s ready. He knows the music should come first…but who knew selling out could be so much fun? 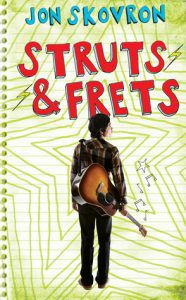 Struts and Frets by Jon Skovron

Music is in Sammy’s blood. His grandfather was a jazz musician, and Sammy’s indie rock band could be huge one day—if they don’t self-destruct first. Winning the upcoming Battle of the Bands would justify all the band’s compromises and reassure Sammy that his life’s dream could become a reality. But practices are hard to schedule when Sammy’s grandfather is sick and getting worse, his mother is too busy to help either of them, and his best friend may want to be his girlfriend. When everything in Sammy’s life seems to be headed for major catastrophe, will his music be enough to keep him together? 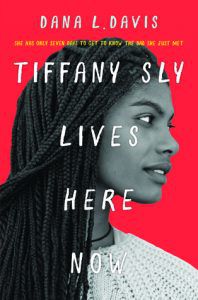 For sixteen-year-old Tiffany Sly, life hasn’t been safe or normal for a while. Losing her mom to cancer has her a little bit traumatized and now she has to leave her hometown of Chicago to live with the biological dad she’s never known.

Anthony Stone is a rich man with four other daughters—and rules for every second of the day. Tiffany tries to make the best of things, but she doesn’t fit into her new luxurious but super-strict home—or get along with her standoffish sister London. The only thing that makes her new life even remotely bearable is the strange boy across the street. Marcus McKinney has had his own experiences with death, and the unexpected friendship that blossoms between them is the only thing that makes her feel grounded.

But Tiffany has a secret. Another man claims he’s Tiffany’s real dad—and she only has seven days before he shows up to demand a paternity test and the truth comes out. With her life about to fall apart all over again, Tiffany finds herself discovering unexpected truths about her father, her mother and herself, and realizing that maybe family is in the bonds you make—and that life means sometimes taking risks.

Want more music in your YA reads? Check out these YA books about fictional teens obsessed with real bands, YA novels with soundtracks to go along with them, YA books about rock stars, and this thought-provoking piece on seeing the same music in YA books on repeat.