The worrying new screen time study published in JAMA Pediatrics made all kinds of feelings knot up in me. It found that “when used in excess, screen time can have consequences for children’s development.” 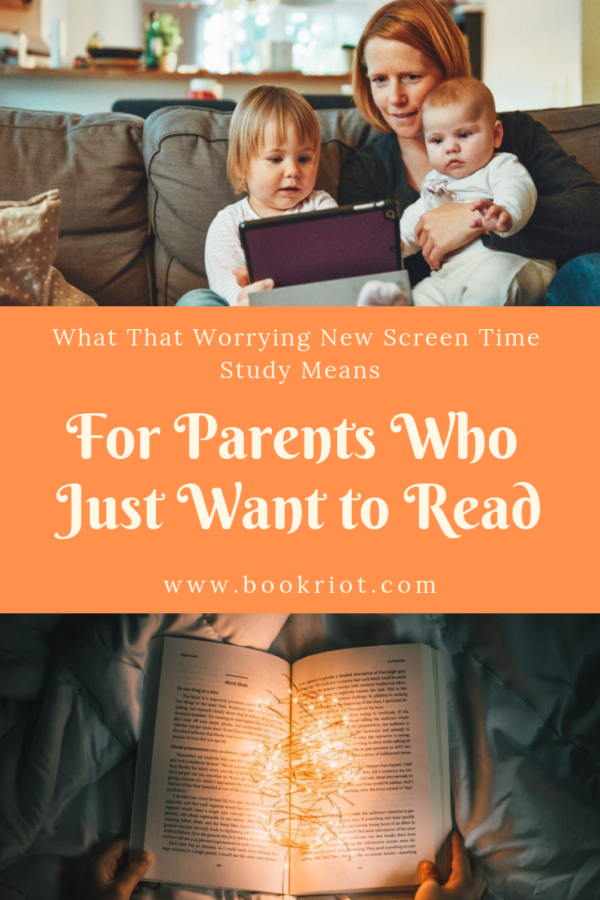 Pre-parent me would have been like, “Ha! All those dumb parents letting kids go on their iPhones better listen.” Because yeah, I was that person with the Strong Opinions about screen time. I had long before decided that my future children would get zero screen time ever.

Fast forward to now: I have a 2.5-year-old son who knows how to swipe and click on an iPhone better than some grandparents I know.

My pre-parent self would be horrified.

So what happened? For the first year and a half of his life, my son didn’t watch screens much. But around the 18-month mark, he developed a tendency to wake at 1 or 2 in the morning and think it was THE best time ever to play with Mama.

Did I want to play? HECK NO. So I’d slump into the rocking chair, turn on Netflix, and sleepily read my book until he got tired three hours later. Then I’d lie awake fretting about how much his brain had probably rotted. What a terrible mother you are! Your toddler isn’t even two yet and he just exceeded the AAP’s screen time limits for older kids.

I was relieved when he turned two, because now he could officially watch two hours of screen time a day. (Except I literally just discovered that the recommendation is ONE hour for two-year-olds. Not two.)

For a couple months, though, the weather in Alaska stayed perfectly crisp, with clear blue skies and drifting leaves and all those lovely, loamy scents of fall. Screens what? I would go outside, plop myself in a camping chair, and let my toddler roam the yard while I sank into Half of a Yellow Sun and Truly Devious and The Poet X. He explored the birch trees and the fireweed, and I read my books in relative peace.

And then winter wrapped Alaska in a tight, glittering hug. Snow blanketed the yard. The Northern Lights danced over my roof. And my toddler decided that snow was evil because it got on his beloved boots, so going outside became a struggle.

Enter screens. By the time mid-December hit, he was watching Finding Nemo or The Gruffalo every single morning while I drank my coffee and read I Am Malala and House of Dreams. Daylight dwindled and my mood dimmed, too. But at least I could count on a couple hours to read. (On a really rough day when I needed to read All The Books and not think about winter, we watched Finding Nemo—gulp—three times in a row. I know. I KNOW. The parenting police can cart me away now.)

And then came the JAMA study, aka Screens Will Ruin Your Kid’s Development Forever and Ever Amen. Okay, that’s not really the title. But when I read it I thought about the day we watched Finding Nemo three times. Just how much development got delayed in those six hours?

But, I wondered, how would I ever find time to read again? Was I a horrible mother for letting him watch a movie so I could enjoy one of life’s greatest delights?

Then I got to thinking about how my son and I do a lot more than watch movies, even in the winter. We read, go for walks, swim, go to library story time, do gymnastics class, and play with LEGOS together. Still, Guilt told me I needed to make a change.

So I stopped the morning movie. Instead, I’ve started reading picture books to my toddler while I drink my coffee. He’s always loved it when I read to him, but I admit that with all our movie watching, our read-aloud time had lagged to only a couple books a day. Now it’s around 10.

And I discovered something else: I can actually read my own book while he plays with his LEGOs. Like, he plays. By himself. For five minutes or even 15. And during those minutes I can read, after which we must dance to “Wake Me Up” and blow bubbles for hours upon end, which is amazing too. But sometimes I want more time to sink into a book, so we’ll sit down together and he watches a short show or movie while I read.

For about an hour a day now, I can sit blissfully with a book and a latte. But you know what? Some days, we’ll still watch a longer movie. Or maybe even two. And that’s okay. Because even a young Michelle Obama watched TV with friends during her lunch break from school.

What matters is balance. Are you encouraging your kids to play outside? Hang out with friends? Pursue their passions? Are you loving on them and letting them express their emotions without judgment and feeding them, clothing them, keeping them safe? Then you’re doing fine.

Now, go ahead. Turn on a movie or show for your kids to watch. Sit down with them and your current read and just relax. Don’t let a worrying new screen time study get in your way.