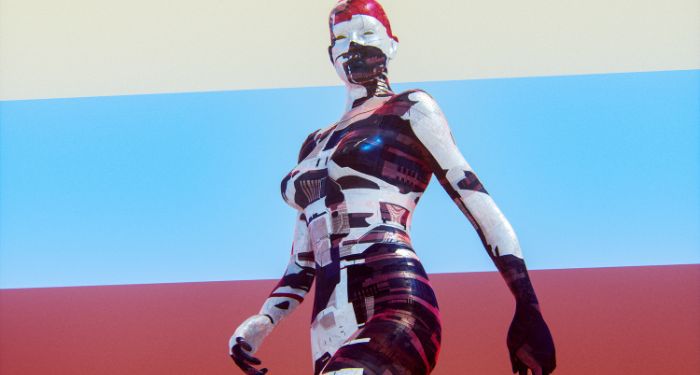 Like our universe, the science fiction genre is constantly expanding. It’s been reinvented, redefined, sculpted, and molded anew. And underneath its large umbrella is a seemingly-endless list of sub-genres that further specify and entertain. From the classic hard science fiction to the recently-invented silkpunk, there is a science fiction sub-genre for just about every story you can imagine.

This post seeks to be a primer to those exploring the science fiction genre. Of course, I don’t claim for this to be an end-all-be-all list. There will be sub-genres missing from this list; if I wanted to list them all, I might as well write a book about it.

Rather than being exhaustive, it is my hope that this primer serves as a jumping off point for further discussion and brainstorming. Perhaps you’re a hard science fiction fan who is curious to dip a toe into steampunk waters. Or perhaps you’re seeking science fiction that’s unsettling and dark, in which case I will be most happy to introduce sci-fi horror.

Whatever you fancy, prepare yourself for a journey and be ready to build your TBR pile.

What Is Science Fiction?

Before picking apart this genre into smaller pieces, let’s get a sense of the broad definition. According to the New York Public Library’s “A Beginner’s Guide to Science Fiction,” science fiction is defined as the following:

Science fiction is a sub-genre of speculative fiction, which is an umbrella term for all works of fiction that defy the common laws of our reality such as fantasy, superhero stories, etc. Works of science fiction use scientific fact and theory as the basis for their plots, worldbuilding, etc., and this is what separates them from other genres.

In a previous Book Riot article, I delved into the megazoid umbrella that makes up speculative fiction. Under that umbrella is science fiction, and then under that, well, is still a whole lot. We’ll start with some classic sub-genres, and then I’ll include a few newer ones.

It’s important to note that there are examples included that will fall into multiple sub-genres. There is a lot of crossover in science fiction, just as there is in fantasy, or really any genre. There may be a title you find to be a classic example of a sub-genre that I have listed in another. I am aware of this. Also, I tried to include examples that aren’t necessarily the very first titles to come to mind. So for all of you “how did [insert title] not make the list?!” people, yes I know, I did that on purpose. 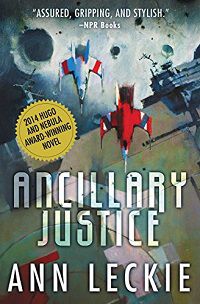 Published in 2013, this book has won many awards for its brilliance. It follows a soldier known as Breq, who was once an AI starship that linked thousands of soldiers onboard. Now, Breq is limited to a human body and is on the path for revenge.

The very opposite of hard science fiction in almost every way. Characters usually take center stage. It’s science fiction that’s less inclined to explain how things are done with all the nitty gritty science, and more inclined to explain the why and the effects it has on the characters and their choices. You can discover more on this sub-genre, with a list of examples, in fellow Book Rioter’s Julius Lobo’s 2020 article “Soft Science Fiction: 15 Classic and Contemporary Must Read Books.”

Pretty self-explanatory, this sub-genre follows characters who are likely in the military and/or the main plot has to do with war and/or the military. Some military science fiction will expound on the glory and heroism of the military, while others use the genre to reflect and comment on lingering issues regarding the military and the catastrophic, cosmic even, consequences of war. 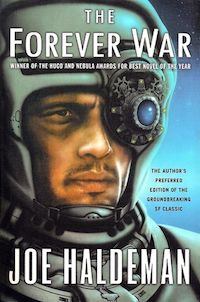 Another Hugo and Nebula-winning book, this is written by a veteran and reflects on the costs of war. It’s set in a far future where Earth’s leaders are intent on waging a thousand-year war against an unconquerable alien race. It follows Private William Mandela, who was drafted into an elite military force. He’s swept away from Earth to fight a literal forever war: While he ages months fighting for survival, back home, Earth ages centuries.

This one is challenging to define succinctly because it’s often thrown around. From my experience, a space opera is the science fiction equivalent of an epic fantasy. Think sweeping story arcs, following many characters. Not only is it mostly set in space, but it spans multiple locations (planets, space stations, galaxies). A good space opera has an epic plot and many subplots, often expanding into a series of books. Obvious classics of space opera include Dune by Frank Herbet and The Foundation Trilogy by Isaac Asimov, but there are plenty of excellent contemporary space operas that astound and entertain as well. On a Red Station, Drifting by Aliette de Bodard and Ninefox Gambit by Yoon Ha Lee are a couple good examples. 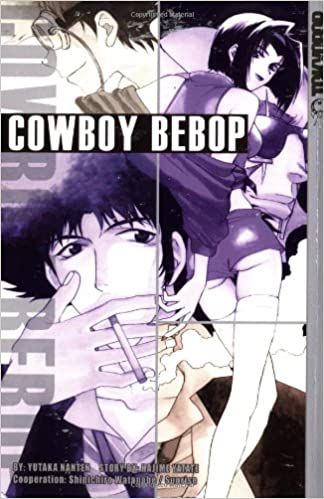 When one thinks space western, it’s hard not to think of Cowboy Bebop. This manga has a popular following and has been adapted to an anime and Netflix series (though it was cancelled after just one season, boo). The story follows bounty hunters Spike, Jet, Faye, Ed, and Ein on their (mis)adventures across space while chasing bounties.

Steampunk is as much a fashion and cultural phenomenon as it is a sub-genre of science fiction. Technically speaking, steampunk is science fiction set in an alternate 19th century, where steam power has allowed for a technology boom. Think goggles as everyday gear (or fashion statement), steam-powered airships, etc. Now, there are stories billed as “steampunk” but are not set in the 19th century, and this can be a subject of hot debate concerning whether it counts as steampunk or not. Go forth and discuss or discourse, my social media friends. You can find a list of steampunk books in fellow Book Rioter Mary Kay McBrayer’s 2019 article “8 Unique Steampunk Reads.”

Whew, is this another big sub-genre. Like other sub-genres listed here, this one can be broken down into even more sub-genres and has a lot of crossover with other sub-genres. From The Hunger Games by Suzanne Collins to Parable of the Sower by Octavia Butler, this sub-genre explores what happens during and/or after the world ends. Some stories take place during the implosion and right after, while other stories are set far into the future, seeing what happens to humanity long after the apocalypse. 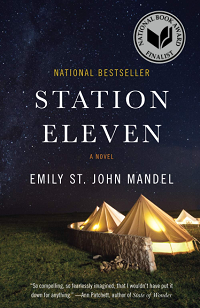 This example also crosses over into literary speculative fiction, but it is a prime example of this sub-genre. It follows multiple characters as they experience a flu-like plague that wipes out most of humanity, and then navigate the United States’ Midwest in the aftermath. For those who are interested in Shakespeare, this also follows a troupe of actors as they put on Shakespeare plays on rebuilding communities. And if you want to continue the journey, it’s now a TV show!

Are you looking for some science fiction with a lot more dread? A lot more fear? Look no further than sci-fi horror. Space as a setting is naturally quite frightening; everything about it is deadly to human life. Think of the logline for the classic sci-fi/horror movie Alien: “In space, no one can hear you scream.” And when it comes to technology, there is always the question of ethics. How far is too far? With horror sci-fi, this question gets a terrifying answer. The Luminous Dead by Caitlin Starling is a great example of horror-rich sci-fi. And if you’re looking for a list, check out TOR Nightfire’s list “She Frightened Me With Science: 6 Sci-Fi Horror Novels.”

If you’re more into laughs than screams, then there’s always sci-fi comedy. These books aren’t without suspense or adventure, but they tend to have more humor than other science fiction novels. 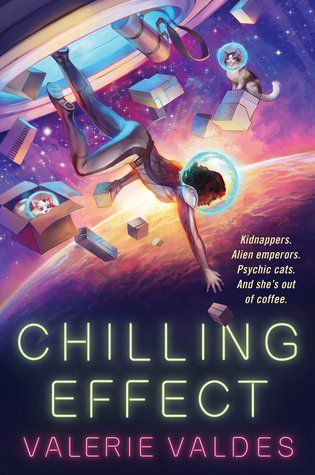 This book has it all: psychic cats, dangerous missions, weird aliens, and more. It follows Captain Eva Innocente and the crew of La Sirena Negra as they traverse the galaxy. Eva has to make money any way she can in order to pay the ransom for her sister. She’s willing to do anything it takes, but the quest to raise money tests the loyalty and love of her found family and crew. This book will make you chuckle while pulling on your heartstrings.

Silkpunk is a recently-created genre, invented by the renown author Ken Liu circa 2015. I wrote a deep dive into the sub-genre in a 2021 Book Riot article titled “What It Is & What It Definitely Is Not“. Please note what does not fall under silkpunk: it is definitely not any and all Asian-inspired science fiction. Don’t do that. Rather, silkpunk is a very specific technology and literary aesthetic. It is technology and poetics, engineering and language. 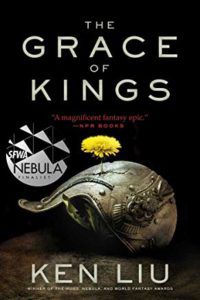 Example: The Grace of Kings by Ken Liu

Liu’s Dandelion Dynasty series starts with The Grace of Kings, and is the basis for Liu creating silkpunk. It follows two friends as they band together to overthrow the emperor. Once that mission is completed, though, things become complicated. Each has their own idea on how the world should be run. In the world Liu has created, as with silkpunk overall, machines are just as artful as they are functional. An example of this from Liu’s book is how they are submarines that look and move like whales swimming through the water.

One of my favorite speculative sub-genres, slipstream can have science fiction or fantasy elements. I wrote a deep dive on slipstream for Book Riot in 2021, which like silkpunk, doesn’t have a definition set in stone. In a nutshell, it’s fiction that can make you feel very strange. This strangeness can derive from multiple genres, from fantasy to science fiction. It’s been described as a post-modern crossover genre and is often used with contemporary and literary fiction that has genre elements. One such science fiction-ish example is Helen Oyeyemi’s recent novel Peaces, which follows a couple and their pet mongoose as they navigate a seemingly-endless train.

Some readers might balk to find zombies under the umbrella of science fiction, but think about it: zombie fiction often originates with a plague, biochemical weapon, or an experiment gone horrible wrong. Science is a major factor, whether it’s finding a cure or finding a way to decimate the undead. Zombie fiction often overlaps with apocalyptic/dystopian fiction (think The Walking Dead) and/or sci-fi/horror. If you really want to dive deep, check out the Book Riot article “Are You Really A Zombie Fan If You Haven’t Read the 25 Best Zombie Books?” 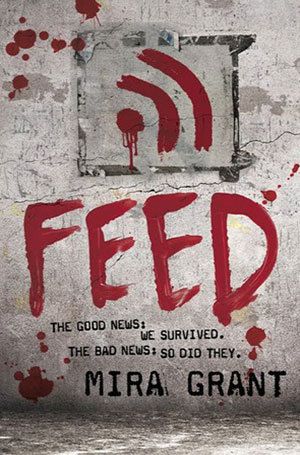 Feed is the first book in the Newsflesh series, written by Seanan McGuire under her horror pseudonym Mira Grant. Published in 2010, this book follows Georgia and Shaun Mason as they investigate the truth behind what caused the rising of the undead in 2014.

Hopefully this post acts as a point of discovery. Perhaps there’s a new sub-genre you’d never heard of before and now want to explore all its facets. If so, I’ve done my job, and I wish you luck on your journey, bookish space rangers.