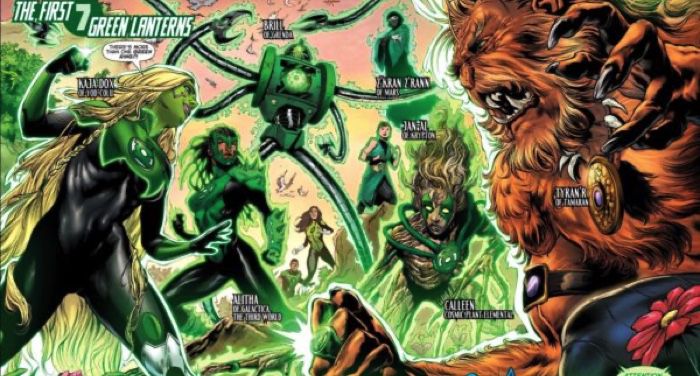 At this point, we’ve covered a pretty good chunk of the Lantern Corp’s history, including the fact Hal Jordan was the first human member of the Corps in 1959. According to the mythos, however, the Green Lantern Corp is much older than that. Approximately 3.5 billion years old. When the supposed Guardians of the Universe created their robotic Manhunters to protect (AKA force their will upon) sentient life among the stars and the Manhunters gained enough sentience to realize they were slaves and lacked the failsafe of fear, they rebelled. The Guardians banished the Manhunters (supposedly) and the robots formed their own society, which has spent a lot of time doing whatever the robotic equivalent of mooning the Guardians and pissing in their “o” shaped whole grain cereal is.

The Guardians, never ones to give up on the idea of being the bosses of everyone, decided that the universe would be better off with sentient beings with “free will and strong moral character” as the enforcers and, having discovered they could harness the energies of the Emotional Electromagnetic Spectrum (behold the space burrito), crafted rings capable of harnessing green light, or strength of will, and lantern shaped batteries (alas, no easy-roll charging mats 3.5 billion years ago) to arm their new “celestial knights.”

Precedent for the Corps was set before any of this happened, however. Ten billion years ago (not my timeline, not my space rodents) when Rami, the “most brilliant” of the Guardians, created seven Green Power Rings to be distributed to the seven strongest willed beings in the universe so they could clean up yet another one of the Guardian’s messes: Volthoom (who you may remember from such classics as “the Guardians experimented on me and then locked me in a lantern shaped battery, hahaha I can control all the colors and I trapped Jessica Cruz in my ring”). The seven prototype rings were extremely dangerous, completely untested, and had no safeguards to protect the wielders. The Guardians gave zero fucks and chucked them at the best warriors they could find.

Alitha was the first Green Lantern in history. An Old God and gladiator from  Galactica, she was born in the Third World (destroyed the make room for the Fourth World, AKA Apokolips). She was killed in battle by Volthoom. 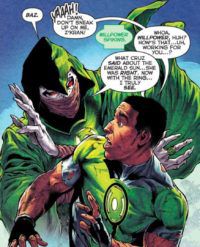 Z’Rann was a White Martian (remember there are White Martians and Green Martians) who saw his entire village slaughtered by other White Martians, leaving him as the sole survivor. Taking the code name “The Stranger” and adopting a costume similar to the one that would later be worn by Martian Manhunter, Z’Rann spent ten years tracking the group who had killed those close to him to “…know the hearts of the criminals I hunted. To see whether they were redeemable…” They were not, and so he executed them in turn. So strong was his dedication to his cause, his will to complete his task, that once it was done, he was given a Power Ring and dubbed Green Lantern 002. He was also killed in battle with Volthoom. 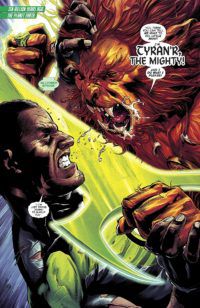 A denizen of Tamaran (perhaps an ancestor of Starfire’s? Inquiring minds), Tyran’r was a…tiger man. Apparently? I don’t know, I got nothing and also that looks more like a lion to me but who am I to judge? He was also a thief and apparently not a very good one because he got busted and brought before Mrak’r, the Wizard King of Tamaran and no, I don’t know why that’s a thing either. Tyran’r busted out and killed King Wizard, which…somehow earned him a Power Ring. He is the only one of the original seven to survive Volthoom and met Simon Baz and Jessica Cruz when they were sent back in time, though neither of them remember a giant tiger dude with a big sword (maybe because he’s a lion?!). As Simon and Jessica were returned to their present, Tyran’r resigned his ring to Simon. 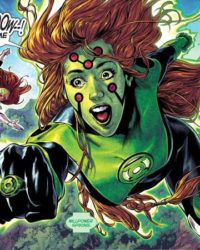 Kaja is the Fraction Hawkeye of the original Lanterns: a mediocre warrior, she has a huge brain she uses to fix computers while living with her girlfriend and dealing with her overbearing mother. Despite the frustrations of her daily life, she loves its simplicity. She is killed in battle with Volthoom. 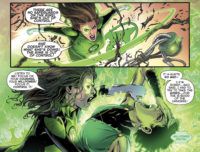 Beware the crossing of streams! Jan-Al is sent on Krypton’s first colonization mission but her ship comes in contact with a purple sun that fries its communications system and kills the engines. They manage to land on the nearest planet which, despite it being a complete wasteland, they claim in the name of Krypton, as one does, only to be trapped by a sandstorm. Her group wants to seek shelter in a structure they find; Jan-Al decides against it and when the structure is destroyed by the storm, her persistence is rewarded with a Green Lantern ring. Jan-Al is killed when her ring, due to its instability and lack of safeguards, charges to 2300% and overloads. 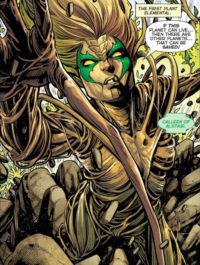 Calleen was the first plant elemental born on a dead, burning planet. Her will to survive is what garnered the attention of the Guardians. She died in battle with Volthoom. 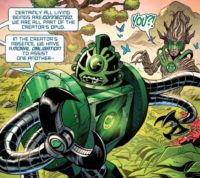 Brill was a member of a hive AI that knew almost everything about the universe and almost nothing about itself. He was chosen as one of several members of the consciousness to separate and go in search of information about the collective’s origin and purpose. Alone for the first time, making his own decisions for the first time, Brill was given the last of the seven Power Rings. Volthoom destroyed Brill’s ship and thus his “body,” killing him.

It was this original team that established the template for what would later become the larger Green Lantern Corps. Rebels all, they would also pave the way for those who were honored to serve but refused to put up with the Guardian’s nonsense, would risk their rings, their reputations, and their lives, to call out the bosses when necessary for the good of all sentient life. On this, the 80th anniversary of Green Lantern’s first appearance (if not the Corps) we salute them.