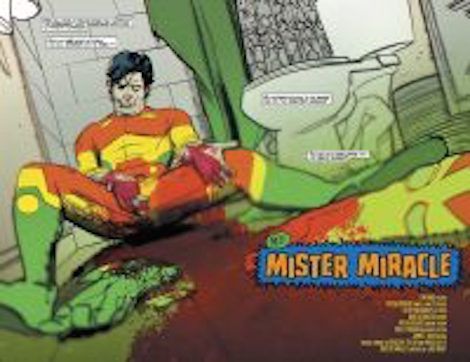 March 1st was day one of Emerald City Comic Con and I had the opportunity to sit down for a few minutes with Mitch Gerads, artist and colorist on the current run of Mister Miracle (Tom King and Mitch Gerads). Gerads and King have collaborated on several other projects during their careers, including several comic issues of Batman: Rebirth and the 2015 Vertigo book The Sheriff of Babylon (one of my favorites of the last five years).

Unfortunately, my phone decided to be a jerk and dump the audio file of the interview while I was trying to save it so that which you are about to read is paraphrased from my memory (luckily, I’d written my questions down which, in turn, help me reconstruct the spirit, if not the actual phraseology of the interview) but it was a fantastic conversation and I simply couldn’t leave it unremarked upon, especially since it focused on the emotionally provocative and affecting Mister Miracle. That’s a long way of forewarning any inaccuracies are mine and I apologize in advance if I’ve flubbed anything. 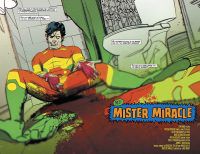 Mister Miracle‘s titular character, who uses the alias in his career as an escape artist (real name: Scott Free) and his wife, former Female Fury, Big Barda are deities who want nothing more than to be human which, Gerads explained, is one of the most compelling things about them: Scott and Barda are the only gods in the DCU who don’t want to be gods. Unlike so many of us, who dream of extraordinary adventure, they want to live the quiet life of a married couple. To go on dates. To have a child and be around to raise him. To be a family. The chaos of their home dimension of Apokolips draws them in, over and over again, inexorable and cruel, forcing them to bear the burdens of both realities.

Mister Miracle, Gerads continued, is a contradiction both for its creators and its readers. It’s a book that provokes anxiety both by virtue of its storyline and its visuals, the color palette Gerads uses when the characters are in Apokolips focused on angry reds and violent pinks. The book also lends a sense of community and connection, however, stomping on our hearts while, at the very same time, providing us with proof we aren’t alone in our trauma and our fears and our pain, be they the every day difficulties of parenthood or the larger terror of world events. Everyone can see a little something of themselves in Scott, especially new dad Gerads, which, the artist revealed, is both terrifying and unifying. It is a contradiction, just like Scott and Barda’s lives and just like our lives. There’s no way to avoid trouble and heartache, but at least we know there are connections to sustain us through difficult times. 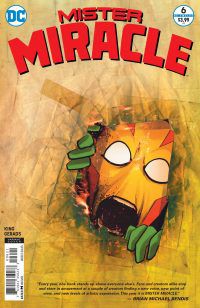 Part of Mister Miracle‘s intensity comes from Gerad’s process: he doesn’t get the script for a given issue until he starts work on it. He wants, he told me, to unwrap the story the same way the characters do: as it’s happening. He wants his responses to be genuine and real, to be surprised when Scott is, to feel helpless and hopeless when the couple does, to come out the other side not looking back at them but traveling with them. Lack of foreknowledge also allows Gerads to shift his craft a bit for each issue, to make each one something different, creating serialized art to match King’s serialized scripts. He cites Norman Rockwell as one of his inspirations (and keeps a book of Rockwell’s work close by when he’s drawing) which is initially surprising until one considers Rockwell’s ability to tell an entire story in single panels, which, when joined together, create a tapestry of American life as Gerads does with Scott ad Barda’s singular lives.

At the beginning of the interview, I mentioned to Gerads that Mister Miracle was one of the few DC books both my husband and I read (he’s primarily DC, I’m primarily Marvel/Image/Oni/IDW); as we were wrapping up, DC’s PR man on the ground, Michael Shelling, asked me what our experience of sharing the book was like. As I considered, I realized we prove Gerads’ point about the book being a point of connection: not only do Jon and I both read it, we sometimes do so in close physical proximity (I’m a few issues behind so we don’t have to look over one another’s shoulders) and talk about it afterwards – something we can’t usually do because we’re reading different books. Mister Miracle, despite being a story which features war as a primary plot point, is actually a moment of detante in our family comic book battles because both of us see ourselves in Scott and Barda, see our story in their story, and so, see ourselves in one another.

As for whether or not Scott and Barda are going to be okay? Gerads offered a smile and a faint shrug before telling me, “No,” but then offering the qualifier that he could be wrong because he hasn’t seen the end of the story yet. I suppose we, none of us, get out of here alive, not even the New Gods, but at least we can fight the good fight together.

Issue #8 of Mister Miracle releases 4/11. The story will come to a close with issue #12. A TPB is already planned and will contain all 12 issues of the run in one volume.