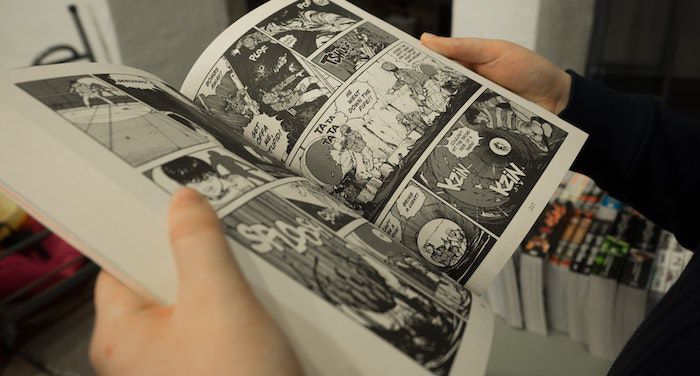 If you look at the graphic novel bestseller lists from the past year, you might notice something. Namely, East Asian comics are dominating the charts. My Hero Academia, Demon Slayer, Chainsaw Man — do these titles sound familiar? Dig into these lists a little more and you’ll uncover other major milestones. Like the fact that the manhwa Solo Leveling is the biggest comic debut of 2021 so far. The explosive growth of East Asian comics in the North American market aside, you might get confused if you dive into online discussions about manga and manhwa. Why? Because these two terms are often used interchangeably. Which raises the question: what’s the difference between manhwa and manga?

The Major Differences Between Manga and Manhwa

In some corners of the internet, you’ll see manga used to refer to all types of East Asian comics, no matter whether it’s manga vs. manhwa vs. manhua. Technically, this usage is incorrect outside of Japan. Manga and manhwa originate from different countries and therefore have different histories, cultural influences, and approaches. Let’s respect that.

The Parallel Histories of Manhwa and Manga

While historians claim that manga as an artform dates back to the 12th century, the modern format as we know it developed after World War II. During this era, Japan underwent a post-war boom, and the burgeoning manga industry was a part of that. The most influential creator to emerge from this period was none other than the Godfather of Manga himself, Osamu Tezuka. Highly prolific, Tezuka’s approach would go on to shape the visual aesthetic and dynamic action sequences associated with manga today.

Other famous mangaka would also shape the manga landscape, adding to the thematic diversity and varied storytelling that remains the format’s strength. For instance, Machiko Hasegawa, a contemporary of Tezuka, penned a popular post-war manga about the daily life of a housewife. Hello there, slice-of-life manga! Other creators, such as those from the Year 24 group, would go on to lay the foundation for BL and josei manga.

By contrast, modern manhwa has its roots in political and social commentary. As you can imagine, this relationship often resulted in a rocky path for the format. For example, under the Japanese occupation of Korea, newspapers were suppressed and political cartoons — AKA manhwa — shifted focus to less contentious topics. Even after Korea emerged from Japanese rule, the relationship between manhwa and the government remains intertwined. From outright shutting down manhwa magazines to creating large conglomerates that distribute manhwa, the government has effectively shaped today’s manhwa landscape in terms of content and influence.

For more details on the history of manhwa, check out this article.

The Visual Differences Between the Two Formats

Another practical difference between manga and manhwa is how they’re read. Manga reads right to left, top to bottom. Manhwa, on the other hand, reads left to right, top to bottom. If anything, this crucial difference is why we must be more precise in how we use the terms manhwa vs. manga. It affects our entire reading experience!

Another visual difference is that manga is mostly drawn in black and white. While full-colored manga do exist, they’re relatively rare. Instead, color illustrations are reserved for introductory pages to highlight a popular title or debut launch. Part of this has to do with how manga is produced in Japan. Manga is serialized in installments via weekly or monthly magazines printed on cheap paper. Those chapters are later collected into volumes known as tankoubon, which is the format most recognizable to us in North America. The entire process prioritizes efficiency and keeping costs down. As you can imagine, shifting to all-color pages would radically transform their business model.

This may change as the manga industry continues to shift toward digital distribution models. In the past, Japan has been slow to adopt digital technology, but much has changed within recent years. Legal, simultaneous publication of serialized chapters are now available on a variety of manga apps and even Kindle Unlimited. Who knows what the future will bring? Even now, more digital-only manga magazines are springing up in Japan.

Manhwa, however, has not been shy about embracing digital platforms. Most modern manhwa exist now as webtoons. But before we continue, don’t get confused. While most manhwa are webtoons, not all webtoons are manhwa. It’s like how squares are rectangles, but rectangles are not necessarily squares.

Digital consumption of manhwa via cell phones have led to other stylistic differences. Webtoons are often in full color. Some webtoons also make use of multimedia such as embedded music tracks. These additions come with a trade-off, however: many webtoons do not have the same level of artistic detail as the format often did when manhwa was printed.

Current Trends in Manhwa vs. Manga

Both manga and manhwa tell a variety of stories, targeting a variety of demographics. Even so, taking a bird’s eye view reveals some interesting trends. One subtle difference is the focus on teamwork vs. individuals.

The biggest manga titles revolve around teams in some way. Sometimes they’re explicitly teams like the Sailor Guardians from Sailor Moon or Team 7 from Naruto. Other times, they’re groups of people who work together like in Tokyo Ghoul. Even non-action titles like Kimi ni Todoke use non-romantic relationships to push the plot forward. The relationships formed by the protagonist are just as important as their ultimate goal.

In manhwa, this team dynamic doesn’t exist in the same way. The protagonist may have allies to help them accomplish their goal, but the journey there is very much individual. Medea may have many partners-in-crime and pawns, but Your Throne is the story of her thwarting Eros and taking what’s hers. Hayan depends on Euntae, but Unholy Blood is the story of her defeating the vampires who ruined her life.

How does affect the reader? Ensemble casts drive manga, whereas charismatic protagonists drive manhwa. In manga, you can continue to read a series even if you dislike the protagonist because the supporting cast is stellar. The same cannot necessarily be said for manhwa because if a main character doesn’t work for a reader, the entire story will fall apart.

Another interesting difference lies in subject matter. While manga certainly tackles real life issues, many manhwa titles stick to the format’s historical roots and make social commentary its central premise. True Beauty focuses on the social obsession with physical appearances. Many webtoons from YLAB’s Bluestring universe like Get Schooled and The World Is Money and Power hinge on bullying and what can be done to address the dysfunctional school environments that foster it.

Even when the sub-genre is similar, manga and manhwa approach them differently. Manga — and its cousin, light novels — love isekai, the genre in which the protagonist are transported to another world. In manhwa, this theme manifests as a world not unlike our own but upon which game-like restrictions have been placed. Solo Leveling is a perfect example of this, but so are series like The Gamer. Both approaches involve characters moving through an altered world, but the execution is fundamentally different even if they may, and usually do, appeal to the same reader.

They Both Tell Great Stories

Regardless of the format, both manga and manhwa are going to continue increasing in global popularity. And as their popularity grows, so too will their influence. We’ve already seen how webtoons now encompass digital comics from all over the world. More and more North American publishers continue their efforts to launch original English language manga like World Piece. Time will tell how both formats’ widespread availability and accessibility will affect any similarities and differences in the years to come.