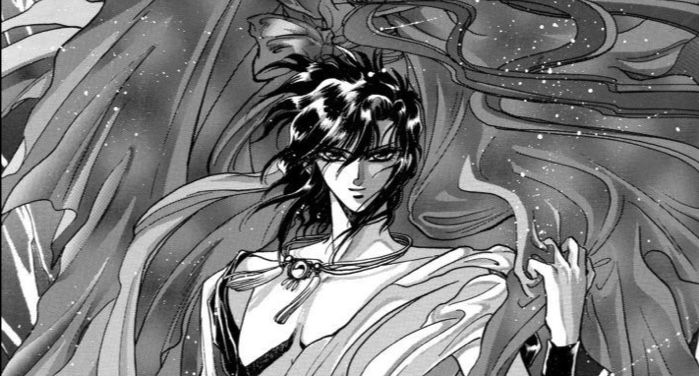 The last few weeks have been so wholesome: my favorite single dads in manga, favorite single moms, favorite kids. So cute. So cuddly (well…in feels if not in practice). So warm and cozy. We must stan.

But come on, admit it. That’s not the only reason we read manga.

We also read manga for the baddies. The villains. The sly ones. The patient ones. The pretty ones.

Manga has some of the best demons in comics. They are unabashedly evil. Gleefully snarky. They have the best hair and the best clothes (sometimes lack thereof) and often the very best swords. Heroes are great, but there’s nothing like a good villain and there’s no villain like a denizen of Hell.

Come on, you know I’m right.

So this week, let’s talk about three of my favorite demons in manga.

GUIDEAU: The Witch and the Beast

The feral girl. The cursed one with the rose tattoo. Linked to the thing in the coffin on Ashaf’s back (though we don’t yet know how or why or if they were linked before or will remain linked once the curse if lifted). Guideau is physically powerful, resistant to injury. She fears nothing. She can control herself when it suits her needs but often chooses not to. She’s a brilliant strategist but often chooses to rush in. She wants to live but does not fear death.

She is angry and she isn’t about to let anyone tell her girls aren’t allowed to hold and nurture rage.

People are afraid of angry girls and women. They’re afraid of Guideau for sure. That’s one of the reasons I love her. She doesn’t make any attempt to tone herself down to make others comfortable. She doesn’t transmute the fire to embers so others can go about their lives without acknowledging that wrongs have been done her and need to be righted. She demands her right to be angry and she forces others to face it.

We can all learn something from that.

Kujaku is an interesting sort of demon: a trickster with a heart, one born to do harm who is determined to do good but who knows the way of the immortals, who knows he must tread carefully lest he be caught out and everything he’s worked to accomplish fall apart. Who knows that if his true identity is discovered by the heroes the same will be true because he was unwanted, he was unloved, and he is in danger of being unmade.

He is marked by the sins of his parents, who were brother and sister (which…mythology, it’s not like he’s the only one) but unlike Zeus and Hera’s children, Kujaku bears physical signs of their choices: purple eyes (Volume 3 of RG Veda has color plates and there is an anime), black wings, and a vertical third eye at the center of his forehead. He can hide these, but they are still part of him. But how many of us bear the marks of our parents errors (not those errors, I hope). How many of us have been judged for them? How many of us have overcome them (and said of our own kids, “Well, they’ll have something to talk about in therapy…”)

I think Kujaku is one of many favorite demons because I see a lot of myself in him. I see someone who wants to leave a legacy of kindness and having done the right thing and having done well but has the past weighing them down, doubting themself, eternally certain they haven’t done enough. Who, in the end, sacrifices everything that is Kujaku to save everything that is someone else and doesn’t get to see if finally, finally it was.

Quirks are an interesting thing in the My Hero Academia universe. Most people get mundane, small-scale powers that let them fill a glass of water at convenience or warm up a cup-o-noodles or keep the mud off their shoes or something. A smaller percentage of the population get more powerful quirks that allow them to become heroes or villains: nitroglycerine sweat, ice creation, disintegration, portal making. And then there’s Tokoyami Fumikage. He was gifted with an Emitter quirk. His quirk’s name is Dark Shadow and Dark Shadow is, in essence if not in name, a demon.

Tokoyami is a very serious person. He pays attention in class, does his training, doesn’t perv around with Minetta. He’s pleasant enough, he’s friends with the rest of 1-A. He’s a little reclusive. His room is very goth. And for good reason. When Dark Shadow gets out of control, he’s extremely dangerous. He sinks everything in his path into darkness and devours it. Sucks its soul. Obliterates it.

Why do I love this demon so much?

I love the idea of being a team with my shoulder demon (literal in this case) instead of spending my whole life listening to it whisper in my ear and then sighing, knowing how great that prank could be put now being able to pull it because I’m supposed to be a mature adult. Tokoyami lives with a lot of stress but when he needs to blow it off he can poke Dark Shadow, who can proceed with the mayhem while his host snickers and then, when someone gets pissed, can point at Dark Shadow who can shrug and play the “demon,” card.

Such a fun topic to play with. We may be coming back to this one. In the meantime. Go forth. Indulge your inner Dark Shadow. Just don’t…eat the whole universe. Although, the way things are going…