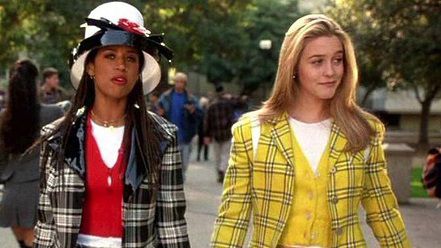 Did you watch it? Did it seem…familiar? It is totally Cyrano de Bergerac, but gender-flipped, modernized, and set in high school.

In other words, it is totally my jam.

This 1995 movie is the best adaptation of Jane Austen’s Emma. Do not @ me (unless it is to talk about how great Clueless is).

10 Things I Hate About You

This 1999 movie made The Taming of the Shrew relevant.

2001 gave us this Othello adaptation, set in the world of high school football.

Twelfth Night set in boarding school? Yes, please. This 2006 movie starred Amanda Bynes, who I am worried about.

Though not set in high school, the 2000 movie modernized Hamlet while still using Shakespeare’s language, and it co-starred Julia Stiles, who also starred in 10 Things and O.

Classics aren’t just being reimagine for the big screen (and Netflix), they’re also all over the internet in the form of web series. Here are a few faves.

The Autobiography of Jane Eyre

Soooooo, when are we getting a feature and/or one of these fun projects based on something other than the usual suspects of Shakespeare, Austen, Brontë, and sometimes Rowling (Okay, and Sheridan Le Fanu, but who remembers anything of his besides Carmilla)?

Books That are Musicals

These books were adapted for the stage, and set to music. Good idea/bad idea?

I think we can all agree that the last one, at least, was a good idea.