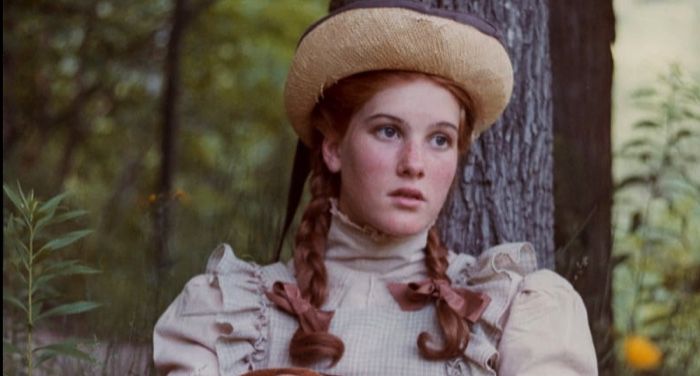 What is it about October that makes me want to dig up my old VHS tapes of the 1985 adaptation of Anne of Green Gables? It could be that quote that floats around the internet for a month every year, you know, “I’m so glad I live in a world where there are Octobers.” More than that, I think it’s something about the quality of light, the red roads, the soft hairstyles,  the feeling you get when you watch the movie. They’re so very warm and familiar. It’s like pulling on your very favorite cable-knit sweater and pouring a cup of hot cider.

There have been other adaptations and there will be many more, I’m sure, but for me, the 1985 CBC/PBS production is the gold standard. Even as I wrote this list of facts, I caught myself referring to the actors as their character names more than once. But isn’t Colleen Dewhurst Marilla? Isn’t Richard Farnsworth Matthew? But of course, movies are a special kind of created magic, and these movies start with Kevin Sullivan.

In the early 1980s, a young Canadian filmmaker named Kevin Sullivan was looking for a piece of classic fiction to adapt. He wasn’t sure exactly what direction he wanted to go in until his wife suggested he look into the Canadian classic Anne of Green Gables by L.M. Montgomery. Sullivan had never read the books, but he was intrigued. He started hunting down information on the screen rights and actually acquired them before he had ever read the books. When he finally sat down to read them, he was hooked. He and his writing partner, Joe Wiesenfeld, got to work on the script and soon after, work on the movie began.

If you’re ready to pull out your copy of Anne of Green Gables, here is a list of ten things you might not know about the adaptation.

1) Avonlea is based on a real place.

Avonlea is fictional, but L.M. Montgomery based it on Cavendish, a real town on Prince Edward Island. While the miniseries filmed some exterior shots on the relatively remote island, much of the movie was filmed in or near Toronto. Sullivan was pleased to realize that the small town of Uxbridge, where he filmed many exterior shots, was about 15 minutes from the town of Leaksdale, Ontario, a town where L.M. Montgomery had spent several years of her adult life.

Naturally red-haired and freckled, Schuyler Grant was eventually cast as Diana Berry, though she originally auditioned for the role of Anne. It’s not unusual to audition for one part and to be cast in another, but Grant’s audition came about in a remarkable way. Her aunt, screen legend Katherine Hepburn, called Kevin Sullivan personally to recommend her niece for the role. While Grant tested well, it was decided that a Canadian actress should play the part of Anne.

3) White Sands Hotel is based on Dalvay by the Sea.

While the White Sands Hotel is fictional, the location used for the hotel is a real place that continues to welcome guests. Dalvay by the Sea was built by a Scottish American oil tycoon who wanted to recreate his Scottish childhood on the other side of the Atlantic. He looked to Prince Edward Island, just north of Nova Scotia (New Scotland), where many Scottish immigrants had settled. At the height of the popularity of Avonlea, the spin-off TV series that followed Anne of Green Gables, the front desk would answer the phones “White Sands Hotel!” to please fans calling to make reservations.

4) Green Gables is based on two houses.

Green Gables, on the other hand, is a composite of two houses. Kevin Sullivan used two different houses, one for the front and one for the back of Marilla and Matthew’s farm. The front of the farmhouse is actually Butternut Farm, a real home in Scarborough, Ontario.

The actress who played Minnie May was actually Kevin Sullivan’s niece, Morgan Chapman. Her remarkable performance is less of a performance and more an example of a very tired, very warm 5-year-old girl who wants her parents. (Sullivan is always careful to assure fans that Chapman’s parents were close by and had free access to her, and that Chapman was quite chipper for much of the filming.)

6) The time period was changed from the books.

L.M. Montgomery’s books are based loosely on her childhood, which is reflected in the time period the books are set in: the 1880s. Kevin Sullivan thought that pushing the time period forward a few years would be more visually appealing and went with an Edwardian style. This simple change to update the look of the film would have a domino effect, pushing the timeline of the story to such an extent that in the third miniseries, Gilbert will fight in WWI, while in the books, Anne and Gilbert’s children are old enough to fight in the Great War.

Anne of Green Gables, Anne of Avonlea, Anne: the Continuing Story, along with other spin-offs like Avonlea, 7-season family drama, bonus materials, and more, are all available to watch on the Sullivan Entertainment app, Gazebo. This sounds like an ad, I know, but I assure you it is not. Just a delightful discovery from a year or two ago. It’s such a comfort to have all of Avonlea in my pocket whenever I need to visit again.

I hope you enjoyed this journey down the red roads of Prince Edward Island. If you’d like to spend more time with the people of Avonlea, you might enjoy the Emily of New Moon audiobooks narrated by Megan Follows, some Anne-themed gifts, a quiz to discover which Green Gables character you are, 12 recent books for Anne fans, or an essay on rereading the Anne books for modern children.