I recently attended my very first New York Comic Con. And though I could have started slow with my first con—perhaps just wearing jeans, comfortable shoes, and my Ms. Marvel tank top—I went full-on Squirrel Girl: Leggings. Bodysuit. Boots. Jacket. Ears. Tail. The whole shebang. I did this despite being a person who generally tries to blend into the background. I did this because, well, okay. Let me rewind a bit.

About 10 years ago, I attended my very first sex party. I ended up at this party because, five years previously, I had been reeling from a bad sexual experience and had decided to become a sex writer in order to fix what I saw as my own sexual dysfunction. My methodology? Throw myself into as many out-there experiences as possible so as to magically reclaim ownership of my sexuality.

These humble beginnings have since led to a career writing about female sexuality, rape culture, and sex ed but, back then, I merely felt broken and was grasping for answers. In attending that party, I hoped to learn something from the other attendees, people who seemed confident and comfortable and totally OK with succumbing to their unbridled desires.

While the party didn’t magically transform me into someone who loved herself, someone who could let go of all her inhibitions forever and ever amen, what I did find intoxicating was the way in which dressing up for such a party enabled me to be a completely different person…for just one night. And while my outfit couldn’t hold a candle to the costumes put together by those who turned out to be creatively-minded Burning Man regulars, every bit of it—the boots, the corset top, the roll-on glitter (don’t judge me)—was armor. And when I wore it that night, I felt invincible.

I’ve never forgotten the high I felt that night. When I left that party to power walk back to the Port Authority and catch a bus home, it felt as if I were floating above the sidewalk. 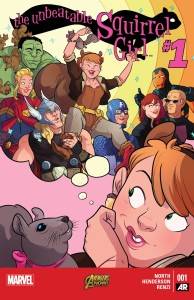 Fast forward 10 years. I’m 37, and I feel as if I finally have my shit together. At least some of the time. But I’m also a socially awkward, socially anxious introvert and, if I could wish for one thing, it would be confidence. Is it any wonder that, when I first read Squirrel Girl, I instantly fell in love? Doreen Green is warm and friendly and funny and empathetic, but she can be fierce, too, and kicks butt when she has to. Not only that, but she loves herself as she is, and isn’t shy about saying so.

This fictional character is my shero.

I am fascinated by the transformative power of cosplay. Last year, fellow Book Rioter Patricia wrote about doing Bitch Planet cosplay as a woman of color, and about feeling solidarity with those who approached her at the con. And more recently, Book Rioter Jaime wrote about a photo shoot during which children with serious medical issues and illnesses were transformed into superheroes, their greatest weaknesses becoming their greatest strengths.

I am merely an awkward book nerd but, as I walked through this year’s con, people calling out Squirrel Girl’s name, asking for photos, and even having their kids pose for photos with me, I almost felt as if I was Squirrel Girl, in all her confident glory.

I commissioned this #unbeatablesquirrelgirl picture from @ericafails and it looks amazing. Squirrel Girl is warm and friendly and funny, but she’s also fierce and can kick butt if she has to. Meanwhile, the Tippy-Toe on my shoulder looks like it’s trying to jump ship. We were all tired after a long day at #nycc.

It felt strange to bring so much attention to myself. But at the same time, it was cool to meet other people who got just as excited about Squirrel Girl as I did.

And for one day—just one day—I could be the ideal version of myself.

If you could cosplay as any fictional character, who would it be? And would you seek to transform your greatest weaknesses into your greatest strengths?