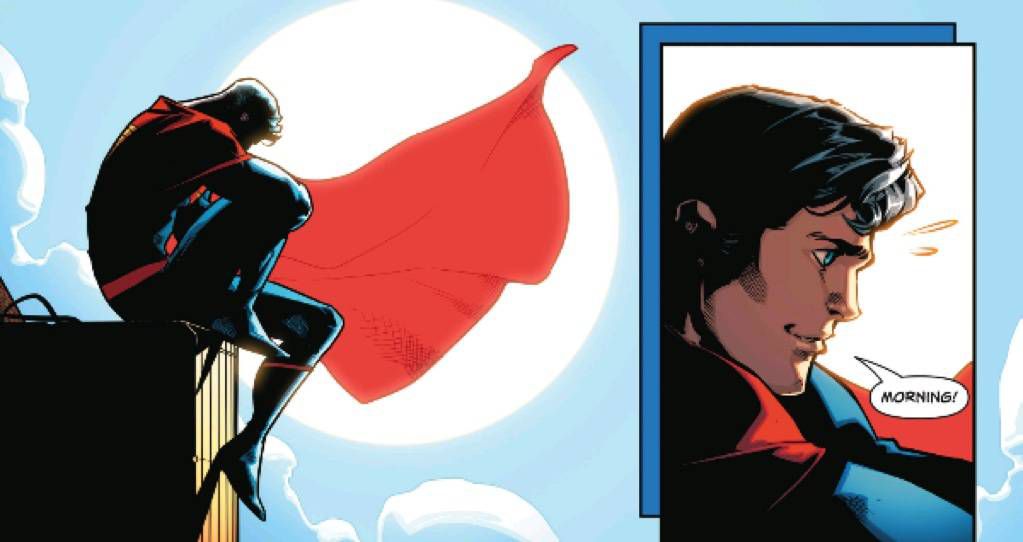 (SPOILER ALERT! This article discusses and contains images of plot points from the recent Superman: Rebirth comics. You have been warned.)

Superman’s been dead since I was a kid.

The collected edition of World Without A Superman was one of a scant few superhero comics in my 90s childhood. X-Men looked busy on the page, Spider-Man merged with a cosmic being, and Sergio Aragones had the Justice League face off against their own self-serious DC branding. The combined message sent me packing to newspaper, Archie, and Nintendo Power comics. I would sometimes reread World Without A Superman, though. There were so many miniature stories in there, and so many unknown superheroes. What bound everyone together across the narratives was the example Superman had set for them all. Nobody wanted to dishonor the Man of Steel’s memory. This reading experience would set the tone for my superhero expectations – even when viewing his cartoons, I would think of the episodes as taking place before Superman’s inevitable death.

There were unique Superman stories recommended by friends, such as his cameo in Hitman #34, the one-story-per-page Superman Adventures #41, and the wonderful All-Star Superman (which Alice Castle unpacked in part here, Kristina Pino here, and Peter Damien, here … yeah, Rioters are down with Morrison, Quitely, and Grant’s signature interpretation of Supes). Recommending those or other stories to patrons in my library is a necessity to avoid the “Superman but” response.

“It’s a Superman story, but he’s too powerful / has no powers / is in love with someone / isn’t in love with anyone / is young / is old / fights too much / doesn’t fight at all / is a twisted, despotic version of himself.” There seems to be a core definition of Superman in some readers’ eyes, mine included, that refutes the existence of any variations, and then he becomes “Superman, but the cheesy old version.” 76 years of brand management would do a number on anyone’s appeal.

Well, I would like to nominate every issue of Superman: Rebirth in print to join the list of “Superman stories that deliver what readers seem to want from Superman stories.” Following a crossover event from 2015 called Convergence, the Superman from another universe (the pre-New 52 universe, to be exact), married to Lois Lane and raising a son, Jonathan, turns out to have been living in the mainline universe in secret. New 52 Superman dies, allowing “old” Superman to take the reins and introduce himself to a familiar yet strange world. The prologue may be convoluted, but sets the stage for everything old to become new again (oh, comics). 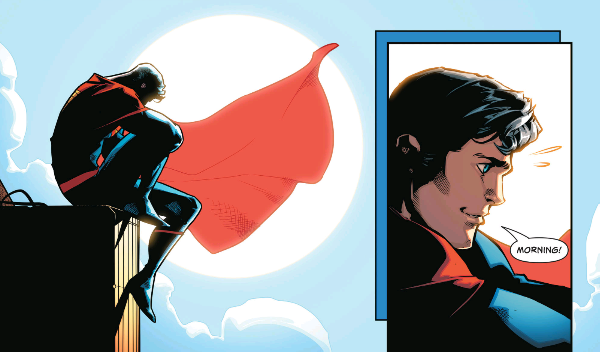 What matters the most in this arc, though, is the existence of a Super-family that restores the sort of optimism and bright personality that is popularly associated with Super-titles, regardless of which world or universe they represent. For starters, the art by Patrick Gleason, Doug Mahnke, Jorge Jimenez, Jaime Mendoza, Wil Quintana, John Kalisz, and Mick Gray pops off the page. Bold elements are often placed against finer backgrounds, while colors alternate between bathing entire pages in primaries and illuminating subdued scenes in naturalistic highlights. 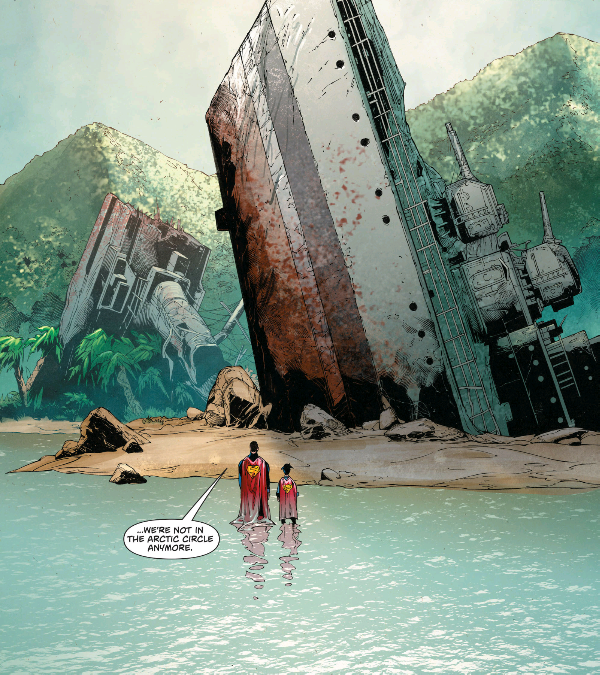 Young Jonathan Kent seems to have the powers of his Kryptonian father, but only part of the time. His shifting between Superboy and ordinary status worries his farmer dad and novelist mom, who still have a lot to teach him about maturity and responsibility, from showing manners to the neighbors to keeping one’s heat vision from burning out of control. Their family unit is like a ship navigating an alien world, even though it’s so much like their old world, not that Jonathan would know the difference. 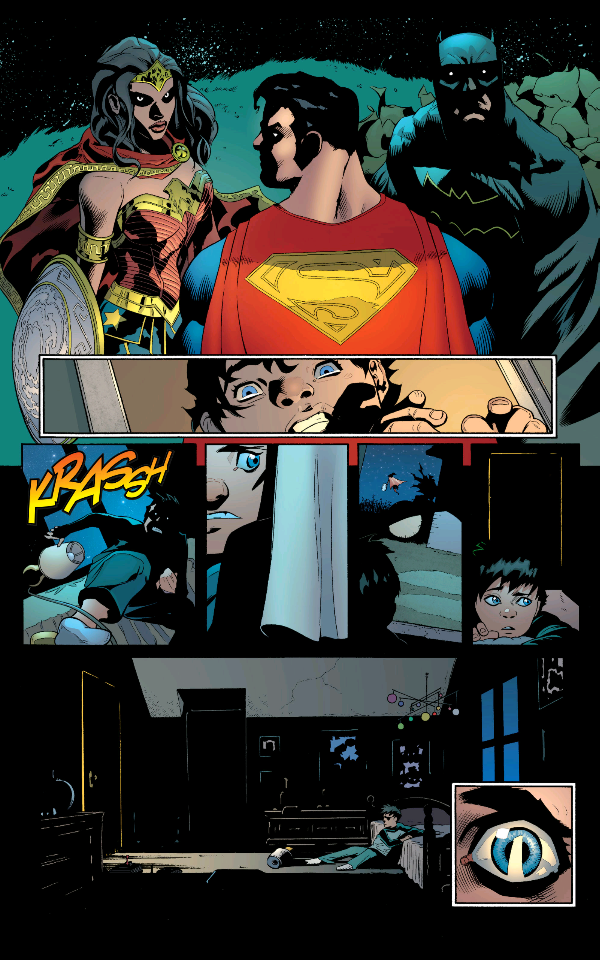 The antagonist of the first Rebirth arc is the Eradicator, a Kryptonian invention that wishes to preserve Kryptonian culture, which nearly makes it an ally of Superman, except it views Jonathan as an impure hybrid to be cleansed of its human heritage. This allows Lois and Clark some great “mama and papa bear” moments and humanizes the resulting action scenes. Tomasi, Gleason, and Gray’s experience with the father-son dynamic of Bruce and Damian Wayne in their recent Batman & Robin series no doubt came in handy here. Don’t believe me? Have a trio of Lois & Jon moments: 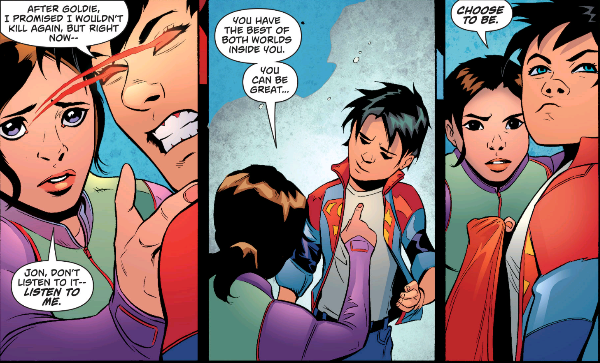 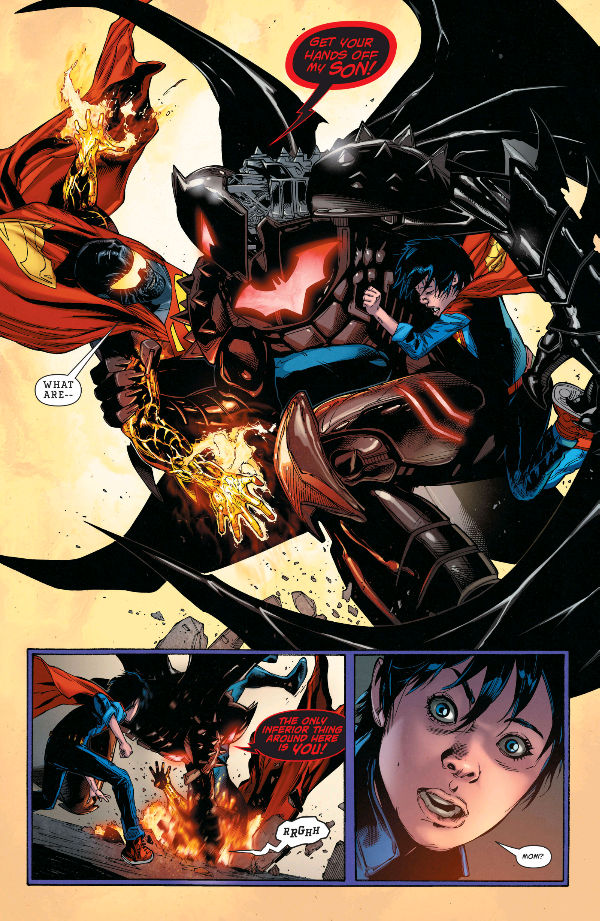 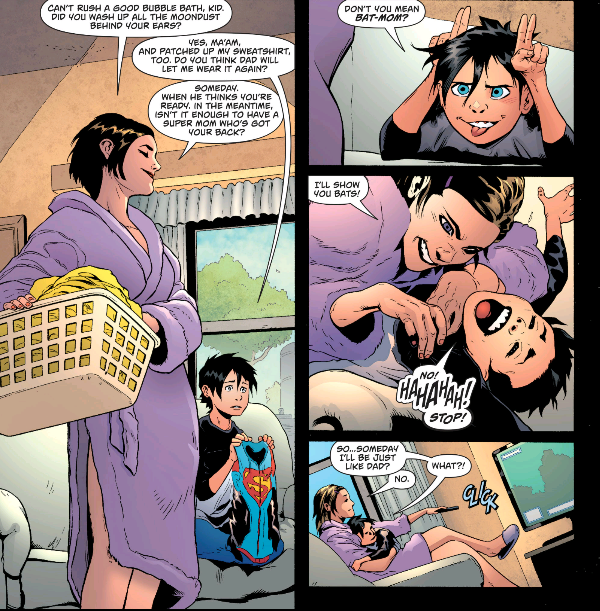 A lot of Superman stories can feel fluffier than the average capes n’ tights story by amounting to “an alien ship falls on Superman’s head and now it’s his problem” without conveying anything beyond exposition. Here, every action shows some quality of one of the Kents and reflects on the others. Instead of “who would win?” the question is “how would they feel?” Personalities are developed over power sets. Lois and Clark each express concerns about Jonathan’s upbringing; Jonathan mistrusts his own powers; Clark reconciles the halves of Jonathan’s bloodline with the concept of being the last Kryptonian from his universe. They also work the farm, tinker in the garage, and attend a county fair. Krypto the Superdog is along for the ride, too. Somebody at DC found the light switch when they greenlit this arc.

To make a good Superman story, you have to embrace a few unpopular notions about what makes good superhero stories: Dark doesn’t always mean better or more complex; fighting for good because it’s the right thing to do is a compelling enough reason; and heroes’ powers aren’t their most important aspect (but certainly don’t be afraid to show them off).

With this Rebirth series, I don’t feel like I’m waiting for Superman to die anymore. I want to share him and Lois and Jon with readers otherwise disenchanted with where the Man of Steel’s been deconstructed and demotivated in other media, because the comics are proudly red, yellow, and blue. 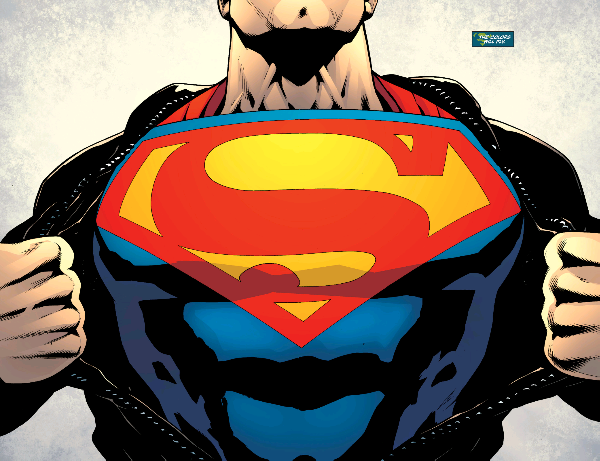