We often learn the most from books that we find challenging or even uncomfortable. Some characters aren’t relatable in a pleasant way, but instead expose or exaggerate our own flaws. Briony Tallis, the protagonist of Ian McEwan’s Atonement, had this effect on me. In the first chapter, set in 1935 England, 13-year-old Briony’s cousins come to stay with her while their parents are getting divorced. Briony tries to force her cousins to act out a play she’s written. They’re exhausted and seem traumatized by the divorce. Even when they tell her that they have no interest in acting, she completely disregards their feelings. 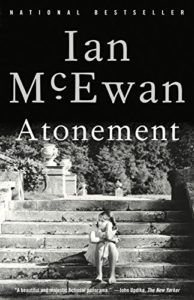 Reading this book in high school, I found Briony callous but also felt a shiver of recognition. Like Briony, I always wanted to be a writer. Unlike her, I’m an only child. Years earlier, I’d often “played” by trying to persuade other kids to act out scripts I’d written. Friends have told me stories of acting similarly when they were little, particularly if they grew up to be writers, filmmakers, or directors. Eventually, we outgrew the impulse to control others. We found creative outlets with collaborators who shared our interests. As my mom said: “If everyone isn’t having fun, you have to stop!”

Briony’s egocentrism, however, only deepens. She wonders: “Was everyone else really as alive as she was? For example, did her sister really matter to herself, was she just as valuable to herself as Briony was? Was being Cecilia just as vivid an affair as being Briony? …If the answer was yes, then the world, the social world, was unbearably complicated, with two billion voices, and everyone’s thoughts striving in equal importance and everyone’s claim on life as intense, and everyone thinking they were unique, when no one was. One could drown in irrelevance” (34).

This quote encapsulates solipsism, or the philosophy that one’s own mind is all that can be known to exist. Briony’s self-centered worldview means that she doesn’t really see other people as her equals or as autonomous. They’re just potential actors in her plays or characters in her stories. I wasn’t familiar with the concept of intellectual ableism at the time. In retrospect, solipsism seems to suggest that some people—so-called “deep thinkers”—are more alive or human than others. It is skepticism directed only against others.

Paradoxically, Briony concludes that each person’s uniqueness makes the world less interesting, not more. This is the opposite of what most people believe in real life. In fiction, though, there’s always a degree of solipsism. Some characters have more developed perspectives and seem more real than others. Briony is a fascinating, frustrating child, but she’s also an archetype of authors, playing God.

Briony sees writing as a way to control or change reality. Her mind imposes a narrative on events she witnesses, even when her interpretation is incorrect. She falsely accuses a family friend, Robbie, of raping her cousin Lola. False sexual accusations and convictions are rare in real life. The false accusation is plausible in the context of the story but seems controversial, especially rereading it today.

Briony represents some of my biggest fears as a writer: invading other people’s privacy or portraying them in a false light. She’s also jealous, vindictive, and curious to the point of being voyeuristic, embodying some of the most harmful motives for writing. She showed me the danger in viewing events in my and others’ lives as fodder for fiction. In high school, I viewed my entire life as a fascinating story, but afterward, I started picking my topics much more carefully.

Atonement is metafiction that asks difficult questions about the ethics of writing, particularly about others’ private lives. If you’ve ruined someone’s real life, does it matter if you give them a fictional happy ending? Are false accusations forgivable if they stem from childish assumptions?

It’s up to each reader to decide whether Briony ever truly atones or redeems herself. Atonement is a warning to authors to proceed with caution. It also showed me egotistical tendencies to avoid in myself and others. Even now, when I meet a manipulative or domineering person, I think of Briony in that first scene, trying to make her cousins into her characters.