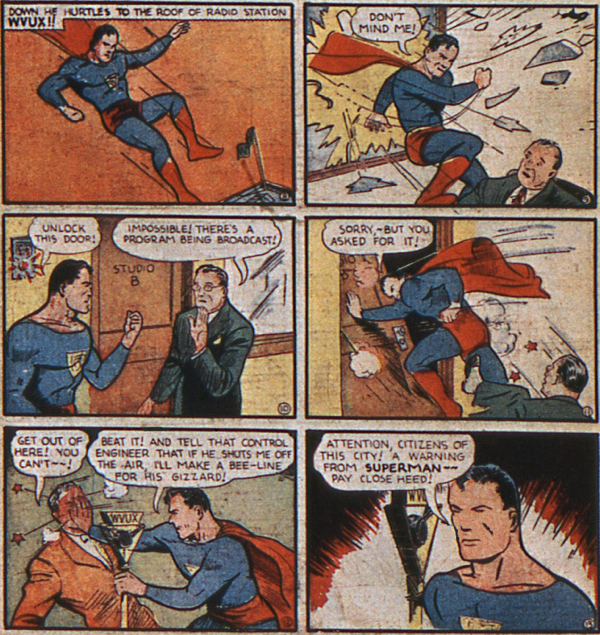 What is happening here? AMAZINGNESS, THAT’S WHAT.

I have a dream: to read every DC comic ever. It is a ridiculous, implausible dream, but it’s mine, and I’m making it happen by 32-page, four-color increments on a daily(…ish) basis.

I’m taking it run by run, bouncing around to follow characters and creators I like, but when it comes to Superman, I’ve decided to be methodical in my approach and start from the very beginning. So I’m making my way through the Man of Steel’s appearances in chronological order, starting all the way back in 1938 with Action Comics #1, and reading every Superman story in Action Comics, Superman, and World’s Finest. I’m up to 1944 now, and I am loving it.

The first year or so, where Siegel and Shuster are finding their way through the character and his milieu, is a lot of fun largely for how freewheeling and experimental it is. Superman’s an aloof, mysterious figure. He’s more violent than we’re used to Superman being, occasionally killing and frequently letting bad guys destroy themselves. At the same time, he’s way more focused on small-scale injustices than the planet-juggling demigod we’re used to; a lot of stories revolve around things like penny slot machines and boxers with low self-esteem. (I have now read at least four Golden Age stories where Superman impersonates an athlete with low self-esteem in order to repair said athlete’s career. Did you know Superman used to be able to rearrange his own face to disguise himself as other people? That’s not creepy.)

Also, he freaking loves smashing things. And into things. And out of things. Dude flat-out never uses a door if he can help it.

However, it’s the war years where things get really fun. (Um. For someone reading these comics 70 years later. World War II was probably not actually very fun.) Clark and Superman’s personality/personalities are pretty much ironed out, and Perry and Jimmy have migrated in from the radio show, fleshing out the core cast. Villains like Luthor, the Toyman, and the Prankster, plus a myriad of one-offs, are making regular appearances. The tone has lightened from the grim populist vigilante of the early years – it’s not quite an outright comedy, but there are definitely goofy plots. Often these involve pop culture lampoonings or metatextual shenanigans; Siegel’s (or…Bill Finger’s?) biting satire of Al Capp, for example, is karmically satisfying.

For me, though, the best part of these comics is the relationship between Lois and Clark, which absolutely sparkles with witty banter and romantic tension. Their early fierce rivalry has mellowed into playful competition and enough squabbling that the other Planet staffers tease them about being in love. Lois’s former disdain for Clark’s supposed cowardice is something more complicated now: a grudging acceptance of his shortcomings, a warm regard for his merits, and the latter masked behind a hot temper and a lot of pride.

Do not mess with Golden Age Lois Lane. Or any Lois Lane. She will end you.

A lot of the plots are actually downright sitcom-esque. My favorite so far is the issue where Lois pranks Clark by writing a fake article “exposing” him as Superman which accidentally gets printed. Perry insists that Clark go along with it to save the Planet’s reputation, which naturally leads to Clark dangling out the window in a Superman costume (Lois and Perry agree he looks nothing like Superman), a fake bank robbery that turns into a real bank robbery, a fakeout death, a tearful confession from Lois, and a total “wah-wah-waaah”-style ending. It’s sheer delight from beginning to end.

In fact, taken as a whole – the flirty rivalry, the broad comedy, the scenery-chewing villains and their skullduggery, the focus on the newsroom – these comics remind me of nothing so much as my all-time favorite supershow, Lois and Clark. Considering one issue has a bizarrely specific plotline practically identical to an episode of L&C (Luthor is making Metropolis boiling hot in the middle of winter for nefarious reasons), I suspect the show’s writers were looking beyond Byrne’s reboot for inspiration.

It’s usually hard to track down comics this old – unless you’ve got millions of dollars burning a hole in your pockets and nothing to do but blow it at estate sales – but luckily DC has given us The Superman Chronicles, a series of affordable trades that collect Superman’s appearances in chronological order. Unfortunately, they only got to 1942 before they stopped putting these out a couple years ago, but they’ll get you started. (Alternatively, you could buy this gorgeous omnibus. For me. For my birthday. April 10th, don’t forget!) There’s also a sprinkling of old issues available on Comixology.

Either way, I recommend giving these issues a shot. Not only is it fascinating watching the characters become recognizable as the icons they are today, they’re darn good comics. Give ‘em a try! Oh, and buy war bonds.