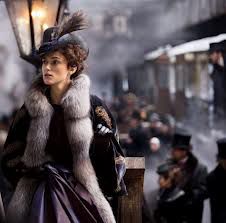 -First thing’s first. I loved the shenanigans out of this movie. But it’s not the kind of love where I think everyone else is crazy for not loving it. If you were lukewarm or chilly or outright below zero about this movie, I can see your POV and I do not judge. But I just j’adored this movie. For me it was like a five course meal made out of digital film.

-It’s director Joe Wright and actress Keira Knightley, best movie-making friends ever, together again! Previously, the duo worked together on the adaptations of Atonement and Pride and Prejudice. I liked those movies, but I think this is the movie where both director and actress brought their A+ game.

-We find out that Joe is secretly not merely a capable director who makes beautiful films but actually a mental patient and I mean mental patient in the best way possible. Most of the movie is set in a theater with ever-changing theatrical sets, playing with the idea that being a part of late 19th century Russian society was like giving a constant performance. The metaphor would feel heavy-handed if it wasn’t handled so BANANAS-awesomely.

-Meanwhile, Keira Knightley, who was very good as Cecilia in Atonement and quite lovely as Lizzie Bennett in P&P CHEWS UP THE SCENERY and SPITS IT BACK OUT EVERYWHERE as Karenina. It’s the best she’s ever been cast. (Chants) Oscar nod, Oscar nod, Oscar nod!

– When I watched the credits I saw that Tom Stoppard had written the screenplay and I actually said out loud “Of course he did.”

-Karenina/Vronsky’s first dance made me NOT BREATHE for, like. EIGHT MINUTES. Worth the price of admission.

-Vronsky was so handsome. Even with his weird 1800’s mustache. His eyes were the bluest shade of sexy. It made me forgive his dated facial hair because those eyes were TIMELESS.

-I still can’t believe sexy Jude Law agreed to play everything-that-is-the-opposite-of-sexy Karenin. He had to work so hard not to be sexy I think he pulled a brain muscle. That’s acting, you guys.

– I love Wright casting Matthew Macfayden as Mr. Darcy in his Pride and Prejudice and then as Oblonsky in Anna Karenina. This is like the best repertory theater company ever. And Kelly Macdonald as Dolly? Perf. There is not a single piece of casting I have a problem with in this movie. Except maybe Jude Law. I want him to stretch his acting wings, I do, I just want him to also still be sexy doing it.

– I just have one more thing to say about the most-of-the-movie-shot-in-an-opera-house convention, and that is that it really does work like gangbusters. It’s NOT like watching a filmed play. This thing is constantly in motion and it’s just so inventive and thoughtful and stupidly pretty. In a way it reminded me of Elevator Repair Service’s Gatz, a theatrical staging of The Great Gatsby. I love that in both cases it was not enough to traditionally adapt. Both pieces seek to explore what it MEANS to adapt a story into a different medium and how the experience changes and the truths of the piece remain the same. Anna Karenina could have been just another period film. It could have been just another attempt to monetize a public domain property with an existing brand and built-in audience. Instead, Wright made the insane film he did and I am glad times a million.

-I’m hoping so hard that this movie brings women-wearing-three-foot-long-feathers-in-their-hair back in style. You guys, I NEED this.

-This made me really want to re-read the book (the Pevear/Volkhonsky translation, natch and natch). That’s probably the best compliment I can pay the film.

Anybody else see the film? What did all y’all think?