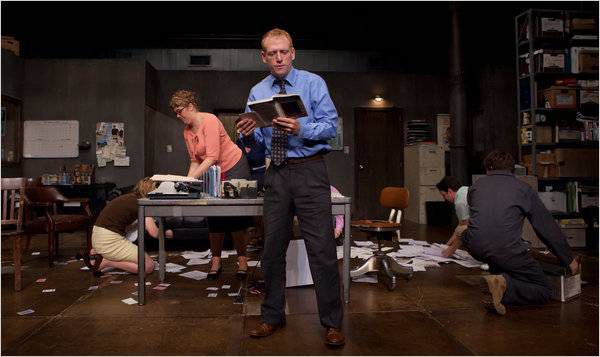 (The Elevator Repair Service‘s production of Gatz is an event that has spent over a decade in development. It’s played in Chicago, New York, all over the world, really, and is currently playing in Los Angeles through December 9th at Redcat.)

– First off, an explanation of Gatz. It’s an eight hour word-for-word theatrical presentation of F. Scott Fitzgerald’s The Great Gatsby. As a piece, it’s hard to fit neatly into a medium. It’s not technically an adaptation, as nothing is “adapted,” the book is presented and read in full. You could call it a play–there are actors, sets, costumes, staging, etc., but what is being presented was not written to be a play, but, of course, prose. It’s kind of a marathon reading, but with all those play-like aspects, calling this a marathon would be a disservice to the production. When it comes to definitions, Gatz slips and slides all over the place. Which is most likely the point entirely.

-The only thing I can definitively say about Gatz is that it is an EVENT. Running a little over eight hours, with four intermissions, one that’s an actual hour-and-a-half-dinner break, a show that begins at 2 in the afternoon and ends at 10:30 at night, “event” is the only way to describe this experience. One of my favorite quotes about plays (which I’ve heard attributed to playwright Paula Vogel) is “Theater should be an event.” A recent favorite quote about books comes from Justin Cronin, who, at a Vromans reading for The Twelve told his audience “A book is not an object, it is an event.”

As an event, Gatz manages to embody both quotes. It is equal parts book and play. It defies the laws of theatrical and prose physics. It may have opened up a black hole somewhere in the universe. Exciting times.

–Gatz opens in the most depressing looking office in the history of the United States of America. A low-level employee who can’t get his prehistoric computer to start, finds a copy of The Great Gatsby in the rolodex on his desk and begins to read out loud. At first he’s only semi-interested, easily distracted by the occasional phone call or fellow employee. However by the time we get to Daisy and Tom’s dinner party, our narrator has become Nick Carraway and his fellow employees have started to take on the roles of the novel’s other characters.

Things shift into high gear at Myrtle’s living room bash. Jazz music is played at top volume and office paper is thrown around by the reams, a crazy-simple and nuts-dazzling effect. We never entirely leave the office just like a reader never entirely leaves his chair.

As we continue we both stay in the office (a desk becomes Gatsby’s car, a couch the mattress he floats on in the pool, and later an open casket) and leave it entirely (Gatsby comes back for Act Three in his trademark pink suit, a gun is brought onstage for the final scene with Gatsby and Tom) The paradox of being there and not being there, it’s amazing that it took a play to perfectly capture the spirit of reading.

-One of the most gorgeous stretches of the show is during the last act when Nick Carraway puts down his copy of the book, which he has been reading from for the last six or seven hours. He stops reading and starts speaking. This is the point when the reader forgets that he is reading. The last hour is a monologue occasionally interrupted by Henry C. Gatz, Jordan Baker, and Tom Buchanan, but never interrupted by reality.

-Without ever being heavy-handed, this production changes the game and it changes it hard. The eight hour production not only re-defines books and plays, it re-teaches us how to read a book and how to watch a play. The last thing we need is everyone running out, finding short novels in the public domain or with easily accessible rights and doing copycat productions. But I hope that this production has and continues to inspire readers and writers and artists and event-makers to think deeply about how we can make books events and how we can experience literature as a community.

(Running through December 9th at Redcat, the show is long and costs a pretty penny and is worth every minute and cent, scout’s honor.)