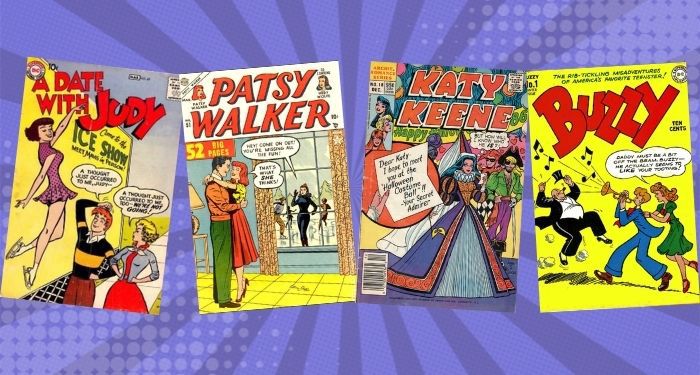 One of the reasons it’s fascinating to look at YA literature from the 1930s through the 1960s is that this was the era not just of the burgeoning category of books, but it was the era when teenagers became a demographic marketers could tap. Teenagers, particularly after World War II, had access to more time, money, and transportation than ever before. This made them a prime target for selling to, and as a result, more became available to sell to teenagers. Likewise, the growth of radio and television provided an ample place for building upon franchises and stories that clicked with fans.

It’s impossible not to talk about this era and this demographic, though, without acknowledging what’s meant by “teenagers.” These were white, middle class kids who would be molded into upstanding white, middle class, heteronormative adults. This is reflected implicitly throughout teen media of the era, and as such, it also applies to a fascinating era in comic history: teen humor comics.

Comics publishers were especially keen on reaching this demographic and during the 1940s, they filled newsstands with a wide range of comics. Most were not great but were instead meant to create consumer demand for more. Rare others, however, got lucky and still remain favorites today.

Archie was one such comic.

MLJ Comics, which would later rebrand as Archie Comics and remain one of the most prolific publishers of teen humor comics, created Archie and Riverdale for their 1941 comic book Pep Comics. The crew was so popular that in 1942, MLJ spun off the characters into their own full-blown series that centered around what it meant to be a teenager.

What made Archie appealing to young readers, particularly those who had not yet hit their teen years, was that it offered a look into a certain kind of teenage life. It was one of milestones and experiences to come in high school with a light and humorous tone. The Riverdale crew respected authority — especially parents — and they did not partake in drinking, drugs, or anything else “inappropriate.” Archie was safe and idealized teenhood,. MLJ saw their audience as preteen and newly teen girls, and the comics, though a times downright goofy in those early years, were meant to entertain them without any impropriety.

The formula of Archie remained largely unchanged until the 2000s.

At the end of World War II, MLJ gave up their superhero comic work and moved to a focus exclusively on teen humor comics. Archie would remain a staple of the genre, as would its spinoff Betty and Veronica. Even when superhero comics became dominant in the coming decades, Archie offered something different and maintained popularity.

Katy Keene was another MLJ/Archie Comics creation. She appeared first in Summer 1945’s Wilbur Comics and was the female-led equivalent of Archie. At times, the writers simply recycled Archie’s stories for Katy. What made Katy Keene memorable, despite not taking off the way Archie did, was her fashion. Bill Woggon depicted her as a high-fashion character, incorporating fan suggestions for the outfits she and her companions would wear. More, those readers were credited for their ideas, and often, Katy would change several times over the course of a day in order to pack those reader ideas in. Readers are still designing outfits for Katy Keene, even though her named run hasn’t been revived in several decades — and she never quite touched the popularity of Archie himself. Her brief Netflix show, spun off from Riverdale, lasted one season, in part thanks to the pandemic.

Both Marvel and DC got into teen humor comics in this era as well. The Golden Age of comics, which began in the late 1930s with the launch of Superman, gave way for more varied genres in the wake of the war. Soldiers had a hand in creating this demand, as comics were among the most popular items sent overseas to them during deployment. Humor was one such genre, again appealing to that sweet teenage target market.

Buzzy Brown was the prototypical American teen when he made his debut in DC’s All Funny in the winter of 1943–44. Buzzy was a musician whose best friend was the saxophone playing Bink. The music storyline drove many of the comics, as did the problems Buzzy had with his crummy car, and the rivalry between himself and another teen boy for the affections of Susie Gruff. While not an Archie rip-off to begin with, as Buzzy developed in his own comic line the winter following his debut but what separated him from the Archie formula fell away in later issues. The comic ended in 1958 after 77 issues; while Buzzy made a short comeback in the ’60s, his character and story line haven’t been revisited by DC since.

The description of Buzzy as a “teenster” also fell away somewhere during its run.

Another teen humor comic from DC was Leave It To Binky, which ran decades before the unrelated but similarly named television show. Binky, whose real name was Bertram, was launched with his own comic in March 1948. The teenage character, along with a cast that included his girlfriend Peggy, a dog named Dopey, his rival Sherman, as well as a brother and sister, were about as “average American teen” as they came. It was a comic cut from the same Archie cloth, though it held a good run at 60 issues, ending in October 1958. Binky, unlike Buzzy, popped in and out of DC comics in the years afterward.

And then there was Scribbly.

Launched in 1936 by a then-teenage Sheldon Mayer, Scribbly the Boy Cartoonist mirrored Mayer’s own desires to become a major comic creator. Popular Comics ran Scribbly that year. Scribbly wouldn’t be seen again until 1939, when he appeared in All-American Comics‘s second issue. Here he was able to take a little more shape, picking up a job at The Daily Dispatch and being involved in the exploits within his own New York City neighborhood. Many of those exploits involved the local grocery store owner, and duo co-headlined the comic as Scribbly and The Red Tornado through 1944.

Thanks to the rise of teen humor comics and Archie, Scribbly saw his own independent comic run again in 1948. It ran until 1952, and even filled in some of the back pages of fellow every-teens of the time, Binky and Buzzy. A short revival of Scribbly came in 2015’s Convergence , where he transcribed the events of The Seven Soldiers of Victory.

You may know one of Marvel’s most famous teen humor comic characters by her later name: Hellcat. But before she was Hellcat, she was Patsy Walker, one of the most successful female-led teen humor comics of her time.

Debuting in Miss America Magazine in 1945, Patsy Walker was, without much question, the female Archie, down to the red hair and the dark-haired rival named Hedy Wolfe. Her comic ran for 20 uninterrupted years and spun off several more, including Patsy & Hedy and Patsy & Her Pals. Though packaged, written, and sold as humor, Patsy Walker also found herself briefly packaged in the same style as the wildly popular teen romance comics of the ’50s.

Millie the Model was another Marvel joint, alongside Wendy Parker — sister of the more well-established Peter Parker. Millie’s stories mirror much of what we see with Katy Keene, but in addition to reaching teen girls through fashion, Millie and similar titles from Marvel like Tessie the Typist and Nellie the Nurse were forerunners (and companions to) teen career novels.

Another reason comics resonated with teen readers: radio. Many of these teen humor comics emerged as radio programming grew and specifically, both mediums began to develop the sit-com style of storytelling. More, these mediums could cross pollenate, as happened with A Date With Judy.

Running from 1941 to 1950, with a film in 1948 and a television show running from 1951 to 1953, A Date With Judy was a teen show that replaced Bob Hope’s show on the radio in 1951. The tremendously popular show garnered rival productions from other studios which also saw success.

The comic published a total of 79 issues and the stories were adaptations of first the radio program, then the TV series. A Date With Judy followed the exploits of every teen girl Judy as she juggled life with her parents, her best friends, and her boyfriend Oogie Pringle.

Several other iterations of the teen humor comics published in this era, some with more success than others. These included Hi-Jinx in 1947, marrying the teen humor genre with anthropomorphic characters; Candy, who emerged as a “wholesome but liberated” teen girl in 1947; and Hap Hazard, which ran from 1944 to 1949, among others. Because there were more comics publishers at the time, there was more opportunity to offer a wide range of stories to eager and attentive audiences — there was money to be made. And while certainly humorous comics continued to be published after this era (and indeed, are still published today), this genre faded away significantly in the late ’50s and early ’60s.

What gave rise to teen humor comics was precisely what led to their downfall: the superhero. Post-World War II, in addition to the growth of humor comics for teens, there was the rise of romance and other genre-friendly stories. Despite teens having the money and time to dedicate to comics, it was adults who steered the comics ship back to focusing on superheroes, as they showed more buying power and proved a longer tail for franchises, story development, dark and/or sexy arcs, and more.

But one thing still remains: Archie lives on, both as a relic of this era and as a character and storyline malleable enough to endure over 80 more years. Fortunately for those meeting the Riverdale crew today, it’s far more inclusive, and even though it’s equally as far fetched, it’s more honest about the dark, murky parts of being a teen.

If this look at the history of teenagers and media aimed at the burgeoning demographic makes you want more, you’re in luck! Dig into the following for even more:

You may also want to read Archie’s Rivals in Teen Comics, 1940s-1970s: An Illustrated History by Michelle Nolan.