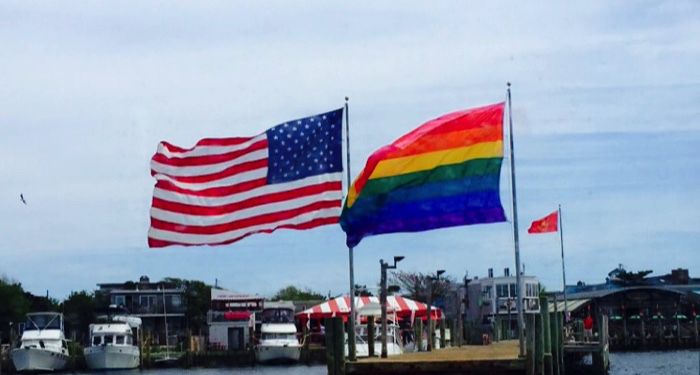 Editor’s note: the title of one book has been censored as it is a triggering slur, but can be viewed through its link.

Fire Island — parallel to the South Shore of Long Island, New York — has been known as a safe haven for gay and queer men since the 1920s and ‘30s, and for lesbian and queer women since the ’50s. It was a place where the more liberal and accepting attitude those queer people were searching for was practiced by the island’s occupants. Composed of Cherry Grove and the Pines, Fire Island’s legacy as a queer American vacation spot has only solidified since the mid-20th century, with thousands of queer people, aged around 20 to 50, calling it home for the summer. Considering Fire Island’s role in many queer people’s lives, it makes sense that it has contributed to queer literary history.

According to Jack Parlett’s Fire Island: A Century in the Life of an American Paradise, Walt Whitman and Oscar Wilde played pivotal roles in establishing the area as the queer paradise and refuge it is today, even though they both walked Fire Island’s beaches almost a century apart. When he first visited the island in 2017, Parlett said he felt a “particular alchemy with the place,” since it was not only the meeting point for several prominent queer authors over the course of the 20th century, but also a mythic place where the groundwork was laid for the ways in which queer culture, and especially queer literary culture, became the beautiful but deeply flawed creatures they are today.

Although it’s practically impossible to pinpoint the exact moment Fire Island became explicitly queer, scholars typically point to when Wilde visited the Perkinson’s hotel in Cherry Grove in 1882 during his American lecture tour. But it would be a few more decades before the island started to be thought of as a safe space for queer people. “Cherry Grove then would have been unrecognizable, a fashionable swimming spot made up primarily of the hotel and restaurant,” wrote Parlett in 2019. “Tempting as it is to see Wilde as the island’s queer patron saint, christening Fire Island at the end of the nineteenth century, it was not until the 1920s that Cherry Grove came to be known as a spot for ‘homosexuals’… And it was from the 1940s that a map of the island’s literary importance starts to take shape.”

In the 1940s, Fire Island — shorthand for the area composed of both Cherry Grove and the Pines — is frequented by a number of big literary names, such as Tennessee Williams, W.H. Auden, and Donald Windham. Christopher Isherwood and Stephen Spender visit in 1947, and Auden writes the poem “Pleasure Island” the following year. Despite its status as a vacation spot, not all queer people viewed it positively.

“For Auden, the problem with this burgeoning gay beach culture was not only that it was a distraction. It seemed to him somehow sinful or fatalistic, and not unlike the Freikörperkultur movement in Germany, the nudist free-body culture that became intertwined with National Socialism in the years leading up to the Second World War,” says Parlett. “The speaker of ‘Pleasure Island’ is correspondingly morbid in illustrating that the ‘Lenient amusing shore / Knows in fact about all the dyings.’”

By the mid ’50s and early ’60s, Truman Capote spends time on the island, working on his novella Breakfast at Tiffany’s. As does James Baldwin, who spent his time working on a draft of Another Country. Around the same time, poet Frank O’Hara composes some of his best work while vacationing on the Pines, writing a series of elegies for the recently deceased James Dean, cryptically scrawling his name in the island’s sands. Fire Island was a “repose from the hectic and over-determined ‘meanings’ of urban life” for O’Hara, a place that was somewhere over the rainbow, like a “nickelodeon soaring over the island from sea to bay.” Tragically and somewhat prophetically, O’Hara is struck by a dune buggy on the shores of the Pines and succumbs to his injuries on the island in the summer of 1966.

Other writers follow suit with similarly Fire Island-inspired works in the late ‘60s and early ‘70s: Alexander Goodman publishes the semi-autobiographical A Summer on Fire Island in 1966, the anonymous “Becky Crocker” publishes the epistolary novel Mr. Ladybug about Fire Island life in 1968, and Edmund White works on his debut Forgetting Elena, set on a fictionalized Fire Island and later published in 1973. Around then, Anthony J. Ingrassia’s play Island, starring Patti Smith and Cherry Vanilla, goes up in New York. In 1976, writer and activist Jack Nichols publishes Welcome to Fire Island: Visions of Cherry Grove and the Pines as a love letter to the Pines and his partner Lige Clark who was killed in Mexico a year prior. Andrew Holleran released his landmark and controversial novel Dancer from the Dance (1978), which painted an important portrait of gay nightlife in the pre-HIV/AIDS era of the 1970s. The book would be credited with causing some people’s view of Fire Island as a questionable gay cruising spot. Equally as controversial is Larry Kramer’s F***ts from the same year, so much so that it gets banned from some bookstores in the Pines.

By Holleran’s account, Fire Island is a place full of contradictions, free and happy while also risky and melancholic. It’s even known by some characters in Dancer from the Dance as “Dangerous Island,” a place where you could “lose your heart, your reputation, your contact lenses.” Despite whatever melancholy it may possess, the locale still proves a place of profound literary inspiration, inspiring countless plays, stories, poems, and novels even during the AIDS crisis of the ’80s and ’90s, a list so long it’s difficult to count.

But any deep dive into Fire Island’s history, let alone its literary history, would be remiss without mentioning its own pattern of discrimination, a pattern all too familiar in most media from the mid to late 20th century. Much of Fire Island’s literary history focuses on white gay authors, mostly men. Dancer from the Dance in particular has many issues with fetishizing the experiences of queer people of color. Lesbian history of the island is also hard to find, even though lesbians and other queer women have just about always been there. Anthropologist Ester Newton, in her study Cherry Grove, Fire Island: Sixty Years in America’s First Gay and Lesbian Town, noted that many who frequented Fire Island in the 1960s “did not value diversity for its own sake” and that there was a growing sentiment that since sexual orientation had less to do with admittance to social activities on the island, race, class, gender, and ethnicity played more of a role.

This is despite the role of queer people of color in civil rights movements, specifically Pride. CBC’s Peter Knegt writes of how “In mainstream gay media, the phrase almost always refers to a fairly specific subset of the LGBTQ ‘community’ largely made up of white gay cis men — even though many of the battles won around queer rights were fought by people of color, trans and gender-nonconforming folks, and queer women, and in fact the modern Pride movement itself was in large part initiated by Black trans women.”

To fully discuss the privilege possessed by white men in the LGBTQ+ community is, of course, another article in of itself. But the discussion of said privilege is pivotal when considering Fire Island’s literary life, a place that was allowed to serve as a refuge for many (white) gay artists who had the freedom, even though they were still oppressed in other places, of vacationing on its shores. I’m sure the same cannot necessarily be said for queer people of color from past eras of Fire Island summers. But at every turn, the area remains something of a safe haven even with all its contradictions: a place that brings out one’s inner queerness and the urge to commit it to the page.