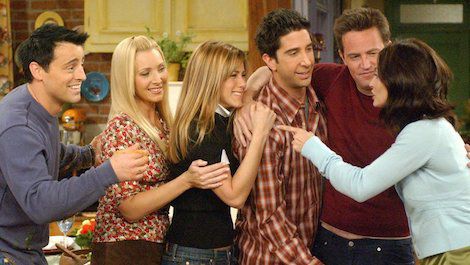 We’ve been doing a rewatch of Friends at my house. We’ve done the first two seasons, where everybody has a lot of gel in their hair and some Outstanding Nineties Fashion Choices, and now we’re halfway through season 3. Richard and Monica have agreed to be just friends, Ross and Rachel are On A Break, and Joey’s been trying out some new reading choices.  As Little Women looks like it’s not coming out of the freezer any time soon (even though Beth doesn’t die *all* the time), he’s going to need some new reading soon—and, as ever, we aim to please. Here’s a list of book recommendations for all of the main Friends characters. Be your own windkeeper!

Joey’s a complicated guy. Sort of. He’s also a  guy with hidden depths who’s actually pretty well read, being a fan of both The Shining by Stephen King and The Unbearable Lightness of Being by Milan Kundera. Any reading suggestion for Joey has to take all of that into consideration whilst also providing some inspiration for his next meal…

It’s got to be Together: Our Community Cookbook, a book that will allow Joey to eat and do good at the same time. Created by a West London community who were impacted by the Grenfell Tower fire, Together celebrates food, friendship and hope. All profits from the sale of this book go towards the Hubb Community Kitchen.

A passionate fan of Little Women by Louisa M. Alcott and yet not that focused in a literature class, Rachel Green presents a conundrum. As the series progresses, she becomes a talented business woman and a mother, whilst wearing some of the most hair styles on television. A book for Rachel has to be something that keeps her attention, can fit into her bag, and also fit into her busy life. If it stops her from breaking up with Ross, that’s also a plus.

Telling the story of women like Frida Kahlo and Ada Lovelace, Little Leaders: Visionary Women Around The World is the story of women who changed the world. It’s the perfect book for a woman who changed her own world, and who wants to pass on that strength to her own daughter. Plus, it’s gorgeously illustrated and should give Rachel some inspiration for her career.

Oh. My. GAWD. Whether he’s accidentally running into Janice for the fifteenth time, or making heartbreakingly beautiful proposals to Monica, Chandler Bing is a man of contrasts. He’s too impatient to discover the ending to The Little Engine That Could, but he’ll scour the shops for a beautiful copy of The Velveteen Rabbit. Any book for Chandler needs to reflect all of this, and his ability to pull a joke out of thin air.

How Not To Be A Boy by Robert Webb is the perfect book to read for any guy, let alone one who’s been on the kind of journey that Chandler’s been on. I figure he’d also enjoy The Book of Bunny Suicides whilst he’s hiding in the bathroom away from the kids.

Monica is a woman who knows her mind. Whether it’s putting the marshmallows into concentric circles or being able to clean her way out of any emergency, she’ll do her best by you and make sure you have a good meal as well. The younger and often over-shadowed sister to Ross, any book for Monica needs to reflect her love for her friends, her cooking skills and her competitive spirit. It also needs to not be poetry.

I’ve gone for Mastering The Art Of French Cooking by Julia Child, as it would deliver on all fronts. It’s not poetry, and she’d be able to cook her way through the book and pick up new skills whilst competitively comparing herself to old Julia Child videos on Youtube. I’ve also picked The Rough Guide To Europe On A Budget as I suspect this would inspire the cost-efficient holiday of a lifetime for Monica.

Able to tell the story of “The Night Before Christmas” and accidentally-on-purpose claim it on her own, Phoebe Buffay doesn’t take prisoners. She’ll let you know where you stand with her without breaking a sweat, and if you’re super lucky, she’ll do this in song. A generous, loving and thoroughly individual character, any book for Phoebe should be a one-off.

Phoebe can take her choice of either Lincoln In The Bardo by George Saunders or A Girl Is A Half Formed Thing by Eimear McBride. Both books are stylistically unique, take a bit of effort to figure out, but are so very worth the effort

One of my little library customers told me the other day that he likes reading books about “DINOSAURS DINOSAURS DINOSAURS”. It’s a description that could easily apply to Ross himself. But Ross has other skills—he’s pretty good at getting married, having an on-off-and-on again relationship with Rachel, and doing the best by his friends. Any book for Ross should make him think; it should be smart, clever and possibly include a recipe for the best sandwich ever.

Though I want to, I can’t go for the easy option by suggesting Jurassic Park or That’s Not My Dinosaur. Instead, I’m going to suggest Ross reads Max’s Sandwich Book—a guide to “creating perfection between two slices of bread”—and alternate this with Sapiens by Yuval Noah Harari.