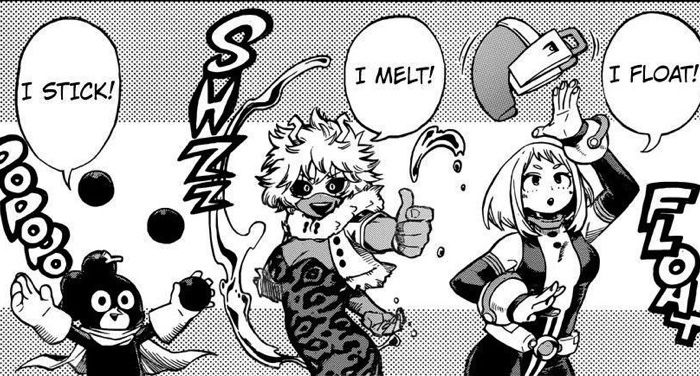 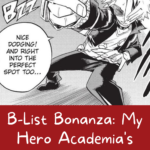 Happy return of My Hero Academia, y’all. Those of you who read the manga series are a little ahead of the moving pictures version, so no spoilers for your friends who are anime only, please. Especially since, from what I’ve heard, season 5 is a particularly intense one with a lot of big reveals and big events.

Including an extremely steep learning curve and some major realizations for our resident literal hot head, Bakugo Katsuki.

Bakugo is a tough character to parse and he always has been. He’s a bully. He’s mean. He’s gruff. His idea of affection is an insulting nickname and his idea of friendship is fighting someone at full power until both he and his opponent are in the hospital. There’s an infamous scene where he and other students who failed the provisional hero licensing exam have to wrangle a bunch of young kids and Bakugo advocates for tough love because that’s how he grew up and he turned out fine; even Todoroki, who grew up in such an abusive household his near permanent emotional dissociation gives him a perpetual flat-affect, gets how problematic that statement is.

And yet, like his target/friend/rival Deku, Bakugo has acquired a squad. Not through his own efforts but through the efforts of self-declared best friend, Kirishima Ejiro who somehow manages to see past the layers of defensive armor to the lonely kid who’s been trained as a pit bull from birth because somewhere, sometime, someone made his mother believe it was easier than being part of a pack. Would I say he has a heart of gold? I would not. But I like that about him, because not all fundamentally good people do. A person can be fundamentally good and be abrasive and rude and standoffish. Those are behaviors and they’re different from who a person is at their core. The members of Bakugo’s squad have already figured that out. I hope this is the season he does too and it gives him at least a little bit of peace and the courage to really make up for his bullying behaviors (see, as always, Zuko, Lord of the Fire Nation and Redemption Arcs), which are 100% not acceptable.

Alrighty, then. Now for the squad.

The first thing you need to know about Kirishima is that he is a wonderful cinnamon roll of a human and while he is officially on the Bakusquad, he is actually friends with everyone in 1-A and pretty much every other human being he meets. He talks a lot about being “manly” but don’t be fooled; when he uses the word “manly” he doesn’t actually mean bro-y or uber-menschy, he means a decent human being who thinks about other people, considers their feelings, and is willing to take risks to make sure they’re okay — including risking his own feelings (and physical person) to make sure Bakugo has at least one friend at UA. It’s the chivalry without the misogyny; this boy is very much on the respect for women train.

His hardening quirk and shark teeth may look scary, and aged-up art usually puts him around seven feet and muscle-bound, but this good and sweet boy is going to remain a good and sweet boy, and a good influence on Bakugo for as long as he’s around.

Fair warning: if you Google, you’re eventually going to hit Kiri-Baku fic and fanart. They are one of the more popular ships in the fandom (PopRocks). Click with care.

I will die on Defend Kaminari Hill, because he does not deserve the abuse he gets from the fandom. This poor bean is not stupid; far from it, actually. He’s quite the poet, musician, and literature buff. Hs quirk is that he can generate electricity that runs through his whole body including his brain. He actually damages his gray and white matter every time he uses his power and he does it anyway because he wants to become a hero and save people who need saving, so stop and think about that before you laugh at him next time he goes Plus Ultra. He doesn’t love direct combat, but he’ll jump in when necessary and has worked with Hero Support to develop “pointers;” discs he can fire and then electrify to use as distance weapons.

Like Kirishima, Kaminiari is pretty chill and friends with most of the class, even Minetta, which…well, that you can make fun of him for. He does like the ladies but he’s not pervy like grape-boy, so he has that going for him. Like Kiri, he’s a sweetheart when it comes down to it and 1-A is his loving, if very weird family.

He enjoys screwing around and joking with his classmates but is also usually one of the first to realize when things are getting serious and call his classmates to order (thank goodness, no way Iida can herd those cats on his own). Sero can fight on his own or as part of a team, using his quirk in tandem with those of others and even when he is incapacitated, others can use his tape. He and Uraraka find their powers to be particularly effective when used together since he can capture from a distance and she can then move people out of the way or he can toss her tape and she can get bystanders out of danger.

Mina isn’t the only 1-A student whose physical appearance has been altered by her quirk, though she is the only one who’s pink. Her hair is also pink and she has two yellow horns on her head. She can secrete acid and control both the solubility and viscosity of said. She’s developed a couple different attacks with it, including: acid veil, shot, and layback.

Mina is very cheerful and hates to miss gatherings or a chance to go shopping. Her academic performance isn’t on par with some of the other students on class but she has a lot of other talents, including the ability to bring people together. She’s willing to risk her own life to save anyone who needs saving. She’s also a fantastic dancer, which Midoriya has pointed out indicates impeccable body control, a useful skill to have in a fight even if she doesn’t have training in close combat skills. Her entreé into the Bakusquad: she is 0% intimidated by Lord Explosion Murder, and though he’d never admit it, he kind of loves that about her.

And there you have the Bakusquad in a nutshell. Or a dormshell. He may not be the squad leader they deserve, but they’re the squad he has and it’s been gratifying to watch him realize it over the last four seasons. Here’s hoping the full realization hits in season 5.