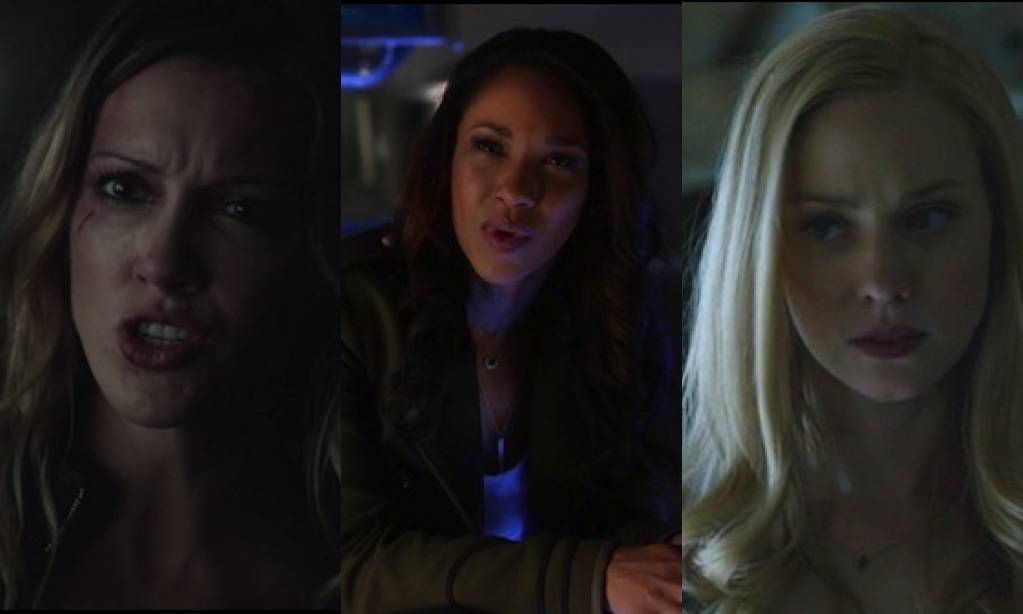 Let’s say that you’ve just discovered that someone close to you – perhaps your best friend, or your lover, or a family member – has been lying to you. They’ve been assuming a different identity; they’ve been breaking the law; they’ve been hurting other people and being hurt in return. They may have worked with other people you love to deceive you; they may be hiding godlike powers. They may not even be human.

But now the truth is out. Are you furious at how they’ve treated you, and the disturbing things they’ve done in the name of vigilante justice? Or do you immediately forgive them, and tell them you understand why they had to do what they did, and that they’re a hero?

Oh, and a quick follow-up: are you a woman? Because if so, welcome to Door Number Two.

We’re currently experiencing a glut of superhero television, and for the most part, I love it. But I’ve noticed a maddening trend when it comes to secret identity reveals: women don’t get to be angry about them.

On The Flash, the treatment of Iris is the biggest problem with an otherwise exceptional show. All through the first season, she’s lied to by her father and foster brother, despite the fact that being kept in the dark actively imperils her. Joe and Barry conspire with Iris’s boyfriend Eddie to gaslight her and hide her mentor’s murder from her, and they rope in every casual friend Iris makes, from the S.T.A.R. Labs crew to Felicity, while cheerfully sharing Barry’s secret with everyone from Ray Palmer to Captain freaking Cold. It’s controlling, it’s cruel, and it’s explicitly gendered – look no further than Joe’s gross comment that Eddie’s opinion that Iris has the right to know doesn’t matter to him until Eddie and Iris are married for proof of that. And when Iris finally, finally finds out, Barry has the gall to claim that they’re even because she “lied” about having romantic feelings for him – feelings she herself isn’t sure of, and which he only “knows” about because of a brief time travel-related jaunt which he is also lying to her about!

But no worries! Joe’s promptly placed in peril, and Iris has less than an episode to be angry at the men in her family before fear, and then the forgiveness that comes with relief, replaces it. Phew! Candice Patton was almost forced to make an unattractive facial expression for a minute there.

Or how about The Flash’s sister show Arrow? Now, TV’s Oliver Queen is basically a loose collection of lies and torture-justifying held together by tight green leather, but it’s the way the women in his life respond to those lies that really gets my goat. Over the course of three seasons, his mother Moira, his sister Thea, and his first love Laurel all find out about his vigilantics. (“Vigilantics” neologism copyright me, patent pending.)

Now, just to make this really clear: Oliver has, as the Arrow, literally physically attacked and terrorized every single one of these women. He’s held Laurel hostage, he’s been shot by Moira, and he’s crashed through Thea’s apartment window in an effort to terrify her into confessing her ongoing connection to Malcolm Merlyn. He is also a known murderer many, many times over; at my last count, he has directly killed 49 people by his own hand over the course of three seasons (flashbacks included; explosions with an unknown death toll not). Moira, Thea, and Laurel don’t know about all of those kills, but they know about a lot of them.

And yet upon finding out that useless playboy robot Oliver Queen is the Arrow, all three women are immediately overflowing with admiration, gratitude, and sympathy for how tough it must be having to kill all those innocent bodyguards to actual criminals. Never mind that Thea has repeatedly rejected both of her biological parents for being murderers, or that Laurel’s job is literally to prosecute killers. Ollie is the protagonist, and being mad at him for lying would prevent his ladyfolk from making encouraging speeches at him, so hey, bygones!

“Oh this? It’s just the face I make when you are OBVIOUSLY LYING TO ME.”

The Daredevil episode “Nelson v. Murdock” stands in stark contrast to all of this too-easy forgiveness. Matt’s best friend and partner Foggy has just found out about Matt’s vigilantics (guys, I am loving this word), and he is livid. Over the course of the episode, he calls Matt out for lying, for breaking the law, for endangering himself, for endangering his coworkers and their livelihood, for invading people’s privacy, for indulging his extremely troubling violent impulses, and for attempted murder – all of which Matt has done. This is intercut with flashbacks of the history of their friendship, to highlight the depths of Matt’s betrayal and how painful this is for both of them. It’s deeply, deeply cathartic to watch.

But that’s Daredevil, I thought; it’s an entirely different creative team than the DCW, and overall the MCU has a much less classic approach to the idea of secret identities and “love triangles built for two.”

And then I remembered Tommy Merlyn.

At the end of Arrow’s first season, Ollie’s best friend Tommy finds out that Ollie’s the Arrow – and much like Foggy, he’s absolutely livid. He straight-up calls Ollie a serial killer to his face, which…isn’t really unjustified. He’s furious on both a personal level and a broader ethical one, and remains so until, well, he dies. (RIP, Tommy. I’ll never forget you!)

Women’s anger isn’t pretty or useful to men. It prevents them from cheering their male superhero on from the peanut gallery; it makes them unattainable in a way that’s not because the hero is being admirably noble. Also, it makes their faces go all scrunchy, and we can’t have that; never forget Jessica Alba being told to “cry pretty” on the set of Rise of the Silver Surfer, or, more recently, Joss Whedon telling Elizabeth Olsen to keep her face calm during Age of Ultron’s fight scenes because an angry, combative face was unattractive.

There’s a reason women love Agent Carter, a show powered by a subtextual engine of Peggy’s grief, frustration, and rage. There’s a reason Laurel Lance never clicked as a character until her largely incoherent but still deeply satisfying Season 2 rage spiral; life has done her wrong, and she’s finally, finally hitting back. There’s a reason so many readers are proudly labeling themselves non-compliant. We so rarely get to see our own anger reflected in mass media, and when we do, it’s deeply cathartic.

I’m so ready for Jessica Jones to be furious for a whole 13 episodes of her first season. I’m hoping Karen Page gets to be as livid as Foggy was when she finds out that Matt is Daredevil. I want Sara Lance to come back from the grave as spitting mad as she was when she went in, and I want Laurel and Thea and especially poor Felicity, sadly defanged by her romantic entanglement with Oliver in Season 3, to get and stay angry with Oliver when he inevitably does something dishonest or ethically dubious. Even Supergirl – as sunshiney as Kara seems, and as I want her to be, I also want her to be allowed to get pissed when the situation warrants it. Girl’s got laser-eyes for a reason.

“Hey, have you guys noticed that everything is bullshit?”

I’m so excited for this coming year of superhero TV to bring me Supergirl, and Jessica Jones, and Peggy Carter, and Speedy and Hawkgirl and two different Canaries. And I’m excited for the supporting stories of Iris West and Karen Page and Felicity Smoak and Caitlin Snow and Alex Danvers and Angie Martinelli.

But God, I hope they get to be angry this year. Because these women have been through enough to make them mad as hell. And I don’t want them to have to take it anymore.