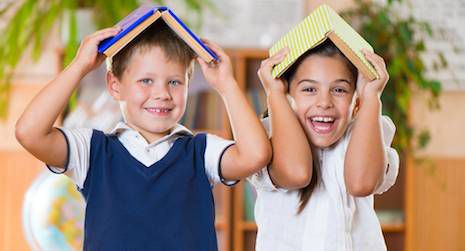 It’s so scary to hear people say that they hate reading. I immediately think of my two-year-old, because I want to make sure he stays excited about reading as he gets older. Raising a reader is easy for me right now because he’s so little and because I read a lot, but I’m always making sure that we have children’s books around to keep him interested.

I read to my son a lot as an infant, like many parents do. At my baby shower, I requested that people give baby books instead of cards, which helped build up a little library for him. The bottom shelves of my bookcases became dedicated to his books before he was even born. That turned out to be a good place for him because as he got sturdier sitting up and eventually standing, his books were at his eye level so that he could reach them.

What he does with his books once he gets to them is up to him. He can stack them, look through them himself, or bring one to me and try to get me to put my book down to read his. He can draw in them, give them away, whatever. However he chooses to play is fine because I want him to know that his books are his. We talk about respecting books by not ripping them or chewing on them, but other than that, he’s free to engage in his own way. I don’t want to hover over him or treat books like priceless items that need to look unused.

I usually bring a book wherever I go, so when we go out together I bring one for him too. Sometimes it’s the book he’s really into that day (lately it’s been Are You My Mother? by P.D. Eastman, which was actually a baby shower gift) and other times it’s just the smallest one I can fit in my bag. Either way, when we end up in a waiting room or at someone’s house who doesn’t have books, he always has something to look at. Since he loves to reread books a few times anyway, one is usually sufficient.

I’ve also started keeping a couple of his books in the car. Next to his car seat is a little slot that a few books can fit in. He can reach them from where he sits, and many times I look back there and he’ll be casually looking through a book while I’m driving. Sometimes, he’d rather just hold a ball or look out the window, but he knows the books are there.

If we get bored and it’s too hot or cold to go to outside, we go to the library or a bookstore. He usually goes straight to the books and starts showing me ones that he likes, or he finds ones that we have at home. Other times, he just wants to play with the puzzles at the library or the train set at the book store, which is cool too. I’m happy as long as he finds it fun to be around books.

Issa Rae explains in her memoir, The Misadventures of an Awkward Black Girl, that her father would only splurge on two things—trips to Senegal and books. It’s a funny moment in her book, but I’ve taken a cue from her father by letting my son get a book from the bookstore when we go. He doesn’t always pick one, but when he does it’s a very sweet scenario with him gasping when he sees the one he wants, walking it to the counter, and being picked up so that the person can scan the book while it’s still in his hands.

Reading is such an important part of our relationship. I know things can change when kids start school and have required readings, but I’m hoping that by starting early and staying consistent he will always love reading.