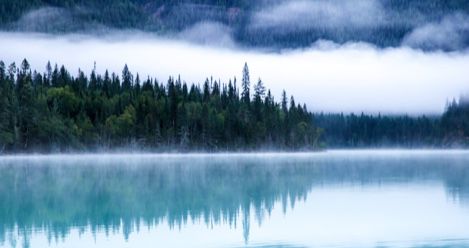 Poems on nature: during the height of mosquito season, they are our link to the outdoors, the only way to enjoy the great green world out there. (No? Just me? Okay.) The poet’s gaze, their observation and insight and word play, can bring the outdoors to us in ways we hadn’t considered, ways we might not have known to look. A good poem on nature slows us down. It reminds us of the dirt we walk on, the trees we pass by, the birds overhead, the hands that have tilled and planted, the survival of seeds — of animals, of humans — despite everything. And in that seeing, in that remembering, we honor the beauty and brutality of the natural world. To that end, here are 33 poems by poets who might not necessarily be considered “nature poets,” but whose nature poems are on point.

Now, first things first: I need you to know that I could fill an entire post with Mary Oliver poems on nature. In fact, I encourage you to check out posts from fellow Rioters:  5 Quotes from Mary Oliver Poems That Could Save Humanity; A Note of Gratitude to Mary Oliver on Her Birthday; and Buy, Borrow, Bypass:  The Call to Language (or The Mary Oliver Edition). My best advice is to just go read all of Mary Oliver. Your soul will thank you.

The same would go for Wendell Berry, who is both a poet and a conservationist and has published widely in both poetry and nonfiction about the subject. And in fact, I would encourage you to check out Valerie Michael’s post 100 Must-Read Books About Nature (which include Berry). While not poetry, necessarily, this is a great list of books to help you get in touch with the aforementioned beauty and brutality.

And look, William Wordsworth and John Keats don’t need my help. But dang, they wrote a lot about nature. So follow those links if you want to check out the Romantics.

Without further ado, let’s get down to some nature poems. 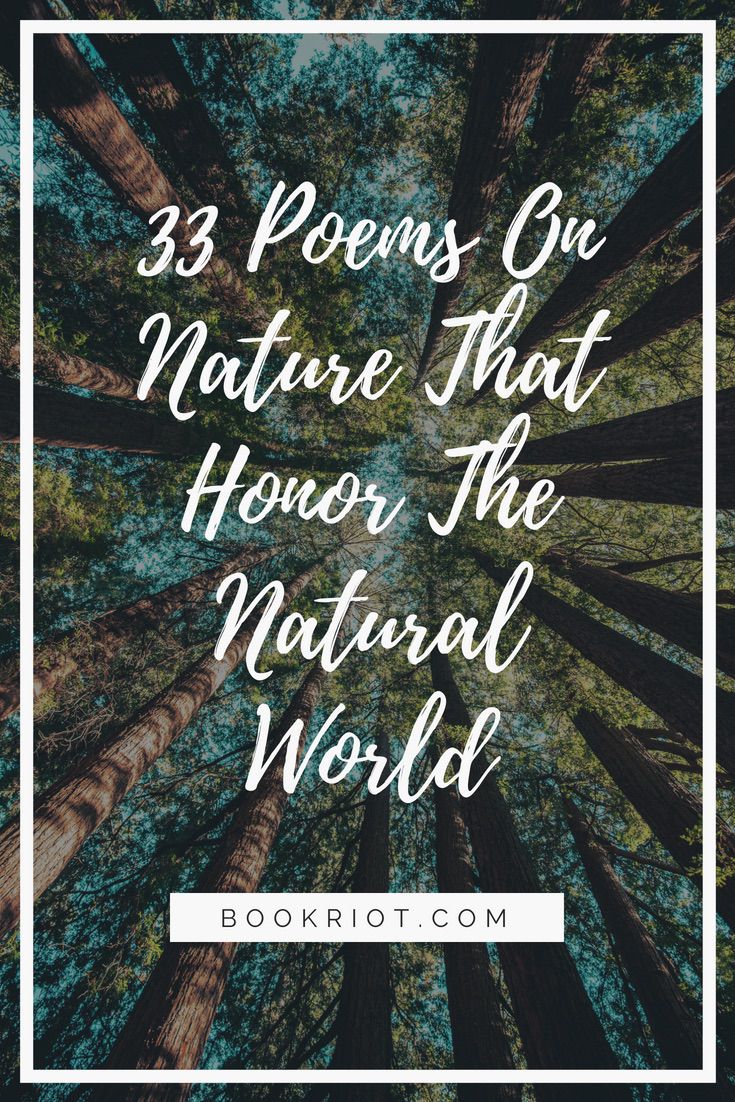 As a seed, I was shot out the back end of a blue jay
when, heedless, she flew over the meadow.
She had swallowed me in my homeland when she spied me
lying easy under the sun—briefly, I called her Mother
before I passed through her gullet like a ghost.

(Listen to the audio!)

“putting in the seed” by robert frost

You come to fetch me from my work to-night
When supper’s on the table, and we’ll see
If I can leave off burying the white
Soft petals fallen from the apple tree.

I returned to a stand of pines,
bone-thin phalanx
flanking the roadside, tangle
of understory—a dialectic of dark
and light—and magnolias blossoming
like afterthought: each flower
a surrender, white flags draped
among the branches. I returned
to land’s end, the swath of coast
clear cut and buried in sand:

Peonies, heavy and pink as ’80s bridesmaid dresses
and scented just the same. Sweet pea,
because I like clashing smells and the car
I drove in college was named that: a pea-green
Datsun with a tendency to backfire.

To everything, there is a season of parrots. Instead of feathers, we searched the sky for meteors on our last night.  Salamanders use the stars to find their way home. Who knew they could see that far, fix the tiny beads of their eyes on distant arrangements of lights so as to return to wet and wild nests? Our heads tilt up and up and we are careful to never look at each other.

and swam out to those ruins on an island.
Blackbirds were the only music in the spruces,
and the stars, as they faded out, offered themselves to me

“The Fire” by katie ford

When a human is asked about a particular fire,
she comes close:
then it is too hot,
so she turns her face—

and that’s when the forest of her bearable life appears,
always on the other side of the fire. The fire
she’s been asked to tell the story of,
she has to turn from it, so the story you hear
is that of pines and twitching leaves
and how her body is like neither—

“To the cardinal, attacking his reflection in the window” by Leah Naomi Green

“It is your very self” I tell him.
He has never seen me.

His quick coin of breath disappears on the glass as it forms: air
that feeds his bones their portion

willingly as it feeds mine. He spends his here,
besieged by the dull birds who gather

and whom he cannot touch, his own feathers
red as wrought blood.

most August mornings, hours away
from starvation to store
enough energy to survive overnight.

Stony trails of jagged beauty rise
like stretch marks streaking sand-hips.
All the Earth has borne beguiles us
& battered bodies build our acres.

“a sunset” by ari banias

I watch a woman take a photo
of a flowering tree with her phone.
A future where no one will look at it,
perpetual trembling which wasn’t
and isn’t. I have taken photos of a sunset.

Autumn wind chases in
From all directions
And a thousand chaste leaves
Give way.

“The gray heron” by galway kinnell

It held its head still
while its body and green
legs wobbled in wide arcs
from side to side. When
it stalked out of sight,
I went after it, but all
I could find where I was
expecting to see the bird
was a three-foot-long lizard
in ill-fitting skin
and with linear mouth
expressive of the even temper
of the mineral kingdom.

It’s all a farce,—these tales they tell
About the breezes sighing,
And moans astir o’er field and dell,
Because the year is dying.
Such principles are most absurd,—
I care not who first taught ’em;
There’s nothing known to beast or bird
To make a solemn autumn. 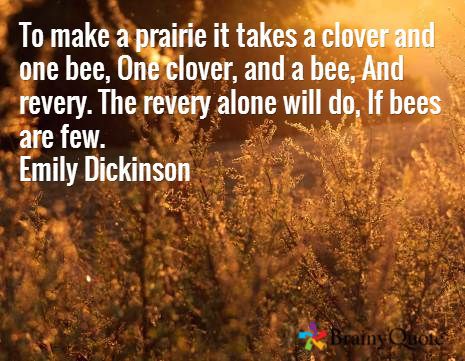 The whole earth is filled with the love of God.
In the backwoods, the green light
is startled by blossoming white petals,
soft pathways for the praying bird
dipping into the nectar, darting in starts
among the tangle of bush and trees.

It is true that the rivers went nosing like swine,
Tugging at banks, until they seemed
Bland belly-sounds in somnolent troughs,

“how the milky way was made” by natalie diaz

My river was once unseparated. Was Colorado. Red-
fast flood. Able to take

anything it could wet—in a wild rush—

all the way to Mexico.

“achingly beautiful how the sky blooms umber at the end of the day, through the canopy” by Gabrielle Calvocoressi

Summers spent practicing in the apartment
stairwell: hand on the bannister, one foot after
another. Did I ever tell you I couldn’t walk

until I was three and then sort of dragged
myself up and downstairs until I was seven
or eight? That burgundy carpet.

In icy fields.
Is water flowing in the tank?
Will they huddle together, warm bodies pressing?
(Is it the year of the goat or the sheep?
Scholars debating Chinese zodiac,
follower or leader.)

“the praying tree” by Melinda Palacio

Ten years of driving the same highway, past the same tree, the
picture is
at last complete. The eucalyptus tree and narrow birds above a
blessed
steel sea with no thoughts of yesterday, today, or tomorrow.

“the negro speaks of rivers” by langston hughes

“in the clearing” by patricia hooper

After last night’s rain the woods
smell sensual—a mixture of leaves and musk.
The morels have disappeared, and soon I’ll come across
those yellow chanterelles, the kind they sell
in town at the farmers’ market. Once I saw
the Swedish woman who raises her own food
foraging for them, two blond boys
quarreling near the pickup, and the next morning
they were selling them from their stand beside the road.

“the world” by jennifer chang

One winter I lived north, alone
and effortless, dreaming myself
into the past. Perhaps, I thought,
words could replenish privacy.
Outside, a red bicycle froze
into form, made the world falser
in its white austerity. So much
happens after harvest: the moon
performing novelty: slaughter,

“at the window” by d.h. lawrence

The pine-trees bend to listen to the autumn wind as it mutters
Something which sets the black poplars ashake with hysterical laughter;
While slowly the house of day is closing its eastern shutters.

I had no thought of violets of late,
The wild, shy kind that spring beneath your feet
In wistful April days, when lovers mate
And wander through the fields in raptures sweet.

Hit the comments: what are your favorite poems on nature?