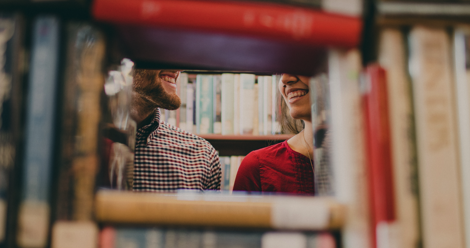 On Independent Bookstore Day, Rakesh Satyal tweeted about a hypothetical bookstore meet-cute, so I responded with the real-life adorable story of how my husband and I met:

Close, my husband and I met bc I posted that I wanted to go to a book reading on fb and he saw it bc we had mutual friends, and offered to take me, and then we buddy read the book, and years later got married and we had our signed copies at our wedding 💛

I thought, if anyone, the readers and book lovers at Book Riot might enjoy the whole story.

So here it is.

Curtis and I met in May 2012. Now, keep in mind, Tinder was not released to the public until September 2012, so we had to meet the old-fashion way: through Facebook. 😉

Curtis and I went to the same small, liberal arts college. So we had mutual Facebook friends, but had never actually met. He was a computer science major and I was an English major, so neither our paths nor classes actually crossed.

Then it’s 2012. In the world of books and reading, you may remember this as the year 50 Shades of Grey came out, but, that has nothing to do with our story of bookish love today.

One day, I saw on Facebook that Chad Harbach was coming to our local bookstore, Prairie Lights, in Iowa City, for a reading of his new novel The Art of Fielding. I shared on Facebook that I wanted to go the reading, and would anyone want to go with me?

My would-be husband then comments “This book is about baseball? How have I not read this yet?”

Dear reader, The Art of Fielding is about so much more than baseball.

But, he offers to take me to the book reading, where we both purchased the book and then buddy-read it together and discussed it the whole way through—and keep in mind, The Art of Fielding is 544 pages, so this was no small commitment.

The rest is history, and we’ve been married two years in June. 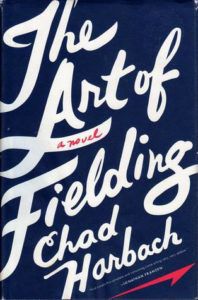 The Art of Fielding takes place at a small Midwestern college, and follows the story of Henry Skrimshander, a young baseball player who seems certainly destined for the major leagues until he gets “Steve Blass disease” and his career is threatened. Steve Blass disease is named for a real-life Pittsburgh Pirates pitcher from the 1960s, who inexplicably one day is unable to cleanly field and throw a baseball. Like Steve Blass, Skrimshander completely freezes up and he can’t play ball anymore.

But the book is about so much more than one young man’s baseball career. It’s about anxiety and self-doubt, and the bonds of teammates and friendship. It’s really very epic and climactic.

And, of course, it holds special memories for me.

You might wonder, do we like to read the same things since we had such a clandestine meeting over a book we both loved? No, not really. Today, Curtis subscribes to The Economist and I subscribe to The New Yorker. He loves nonfiction about politics, the economy, and technology, and I…don’t. I am a solid literary fiction reader.

But, I’m just happy to be married to someone who loves to read and talk about what we’re both reading—that’s what counts to me.

Plus, we both love baseball, so we have The Art of Fielding to thank for our bookish meet-cute.