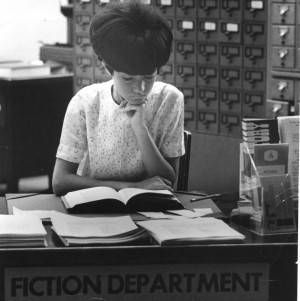 This article has been spurred forward by the fact that my old elementary school librarian retired from service the first week of June and the fact that I have truly fond memories of that library in a little Virginia elementary school. The book shelves were divided by low walls with recommended readings displayed on top. The reading circle was along the back wall with carpeted steps. I remember really bright windows, wide open space. Most importantly, I remember the librarian, who took it on herself to find me books even when there seemed to be few available to my kind of readership. She was a comfort for me through one of the harder years of my childhood– third grade, which I remember as a great upheaval, though I’m not sure now why it was so conflicted. It just was.

I was very much invested in the library as an escape, as a place where an adult knew my name and could talk to me as an individual. This mattered a lot to seven-year-old-me. I could even pick my own books, which is a big deal for kids commonly reigned-in in a public school environment (Bathroom Passes. Those were the worst). And that’s the thing about childhood– the fact that I found great comfort in a library said a lot about where I was going to go later. The librarian’s role was unique in school because she became another influence, another person to depend on, in addition to someone who organized a mass of events (Do you remember The Book Fair? Oh man, do I remember The Book Fair. I saved up for science kits. Do you remember Book It? That was life altering). I remember my librarian picking Out of the Dust by Karen Hesse for me, a novel in verse about a girl surviving the Dust Bowl. This book alone blew my concept of reading apart, because I hadn’t realized that a novel could ever be delivered in poetic form. I thought about this book later when I took an independent study creative writing course in college in which I tried my own hand at combining forms.

Of course, I was lucky for a lot of reasons. I had parents who recommended that I read. I was in a school system with the funds to maintain a library. All of these things later allowed me to dive into my role as a reader, and ultimately as a writer, too. But, the fact that we had a full-time librarian was really what pushed this whole thing over the edge– my familiarity convinced me to actually read what I was assigned in the summer, and then confidently visit the much more intimidating middle school library later. This was all about libraries being approachable, and the fact that I could talk to the librarian in 3rd grade meant that I better understood their role in a more academic way when I hit high school. Even later on in life, it was far easier to move through the Dewey Decimal System when I was nineteen in college since someone showed me how when I was ten. At the least, it was familiar on a campus of unfamiliar things.

Now there are lots of arguments about school funding and where attention should go. I understand that we worry over kids who don’t exercise, who sit through excess testing, who lose attention span, who have excessively large classes, or who don’t have access to the same materials or general education as others. There are arguments about how the system could be improved (more technology versus less technology is such an overwhelming discussion) and so much of this is very important to me. But, I don’t think I can stress enough what that librarian was– a resource that I had no idea at the time to be an immeasurable influence. It is not surprising in the least that a study in 2013 by the School Library Journal* emphasized the importance of having a full-time librarian. Schools with funding issues must work with volunteers, part-timers or aids, which, despite well-meaning workers, can lead to disorganization and a lack of familiarity for students. And, there are schools struggling to staff libraries in general.

This is simply something we shouldn’t forget about in the great hub bub of discussion over education. Hold tight to the public school library, please, for all students. Let’s remember the library’s awesomeness, its power, the fact that it delivers a confidence in education, and the librarian’s role in connecting reading to writing, class lessons to research, socialization, and independence.