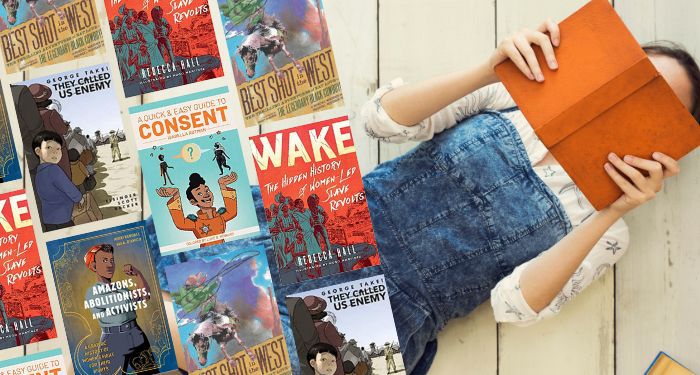 I like to consider myself a curious person. I always want to know how things work, who did this thing, and why that happened. What I’m not always great about is the follow-/ through. Sometimes I look at a prose nonfiction book about a topic and think maybe I should just read the Wikipedia article instead. And sometimes I do. But other times, I still want a particular writer’s perspective on a thing, especially if they were part of something. Or maybe it’s a memoir, or a how-to guide, that really needs a particular loving hand to get you through a topic.

But sometimes I look at the nonfiction shelf in my book room and think… I ain’t reading all that; I’m happy for you though, or I’m sorry that happened.

Then a glorious thing started happening about a decade ago, and I’ve loved the evolution of it into the amazing segment of nonfiction that it’s become: Comics.

Illustrated nonfiction has a long and storied history, but is mostly considered something that kids read as a supplement to what they’re learning in school. It’s only been in the last few years or so that we’ve seen not just books written for older kids and teens, but with adult readers in mind, that are in the comics format. We can kind of thank Alison Bechdel for it, with her memoir Fun Home not only receiving tons of awards, but being adapted into an award-winning Broadway musical. Hers wasn’t the first, but it did make a splash, and more people realized they could write (or more, could publish) serious comics outside the worlds of superheroes.

And now, there are comics of all levels of humor and depth that were designed to teach you about a lot of things at once or one thing in depth.

One thing people have been doing graphically is pulling together what most Liberal Arts Colleges would call a survey: an overarching look at a topic. This could be a look at women who have historically Done The Thing, like Mikki Kendall and A. D’Amico’s Amazons, Abolitionists, and Activists: A Graphic History of Women’s Fight for Their Rights. Or it could be something like Queer: A Graphic History, which covers an extensive number of topics under the queer spectrum. You can even pick up something like The Comic Book History of Video Games which will give you an illustrated chronology of the parallel development of video games and computers, and how they influenced each other.

Sometimes you want a survey, and sometimes you want to dig into a topic, even if only for a couple hundred pages. You might not even realize how much you wanted to know about a topic until you pick up a well-crafted, compelling graphic history about it. Take, for instance, The Black Panther Party by David F. Walker and Marcus Kwame Anderson. I randomly grabbed it off my husband’s shelf and flew through it. There’s so much about that collection of organizations that I never learned, never knew, and occasionally wondered about. Or maybe you want to pick up Wake: The Hidden History of Women-Led Slave Revolts by Rebecca Hall, which will start you on a quest for more information about…a lot of things they didn’t teach us in school; or Trinity: A Graphic History of the First Atomic Bomb by Jonathan Fetter-Vorm, which is maybe a little too science-y for most people but tells you everything you need to know without walls of prose. Maybe reading one of these will satisfy your interest in a topic…or maybe it can act as a good primer for when you’re ready to dig deeper into the information (because there’s always a reading list or bibliography at the end).

Sometimes, the only information about a person we can find outside of an archive is in comics form (at least, in print). For instance: the first I ever heard about Nat Love? Best Shot in the West by Patricia C. McKissack. (This was in 2014, long before The Harder They Fall dropped.) Similarly, Kyle Baker’s Nat Turner tells a lot of story in very few words, and sparked my interest in learning more about the man than I could discover by following a fat book of pictures. The problem with a graphic biography, of course, is that sometimes it’s not a true biography—elements of the story have to be created by the artist to explain something, or to keep it moving. Such is the case with Max Brooks’ iteration of The Harlem Hellfighters, which takes known events and creates a world around them. So it’s not quite a graphic biography, but it’s a great place to start if you want to learn about Black soldiers in World War I and go from there.

Graphic memoirs are probably the most prominent and well-known types of graphic nonfiction. And while most are very inward focused, they’re still going to teach you something. Everyone who produces a graphic memoir has some kind of lived experience that spurs them to put it to paper, whether it’s about gender identity, mental health, racial intolerance and social justice, or dancing. The March collection tells us about the experiences of John Lewis during the Civil Rights Era, from learning how to be an activist to coordinating some of the biggest actions of the movement. But then you have something like Gender Queer, a much more inward-looking, vulnerable story about a person figuring out who e is, and telling us, the reader, so much more about gender and identity on the whole. Or maybe, you get to learn about a series of events (or a complete culture) while living someone’s life with them for a while. I didn’t know very much about the Islamic Revolution until I read Persepolis. And I feel like a lot of people learned about the ins and outs of Japanese Imprisonment camps from They Called Us Enemy by George Takei. Finally, you have something somewhere in between, like I’m A Wild Seed by Sharon de la Cruz, which combines personal exploration and explanation with declaration—Sharon tells us not just about her own experiences, but adds quite a few asides with facts and recommendations.

I’m a Wild Seed is almost a guide to thoughts and terminology, and those are great to find in comics form, too! They’re usually brief, easy to understand, and they have pictures to help explain things. These can be slightly more in-depth, like Understanding Comics by Scott McCloud, or much briefer (almost how-tos) like A Quick and Easy Guide to They/Them Pronouns, which is one of an adorable series of pocket-sized comic books that explain the whats, whys, hows, and whens of things like queer identities, sex and disability, and more.

There are a lot of ways you can use nonfiction sequential art, whether it’s more comics or illustrated works, to learn about things past and present. They can be all you’ll ever read about a topic, or just a jumping-off point. It really depends on what you want out of it, and how much you want to know. I could go the rest of my life without reading any more about the horrors of the Civil Rights Era and the bravery of the forwardmost activists of the movement, but I can’t wait to consume more information about the Harlem Hellfighters—preferably in movie format, but you know. I like books, too.

Ready to dive further into the world of nonfiction comics? Try:

6 of the Best Nonfiction Comics for YA Readers