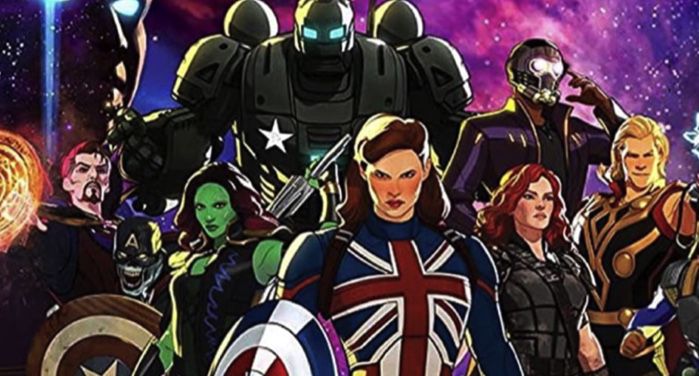 As the world spins rapidly into more pandemic turmoil, there is a bright light in the distance, and that bright light is the splash card for the Marvel Cinematic Universe (MCU). With Wandavision, Disney expanded from movies into TV, followed quickly by The Falcon & Winter Soldier. Now solidly into Phase 4 of the MCU with new Marvel movies and TV, we have to commend Disney on being able to stick to a plan for 10+ years — something this author has never once achieved — and on figuring out a way to continue providing us with the heroes we deserve.

Back in June of 2019, we published a truly spectacular prediction list of upcoming Marvel movies. Alas, that was solidly in the Before Times, and many things have been shifted if not been obliterated in the interim. So today we give you an updated list of new Marvel movies and TV shows, based on titles and release dates, hoping that these dates will not be railroaded by an as-yet-unknown dystopian hellscape, god-driven war, or alien invasion. This is the MCU we’re talking about, after all.

Spoilers for previously released MCU works are not labeled below in our list of new Marvel movies, so if you’re not caught up, read on with care.

First up we have Disney’s first animated MCU series, which explores what it would look like if there had been different outcomes to key MCU moments. The series will be anchored by Uatu the Watcher, who will present us with questions like, “What if Peggy Carter took the super-soldier serum?” and “What if T’Challa became Star Lord?” Watch out for the voice of the late Chadwick Boseman in that one; there is a non-zero chance you may burst into tears when he speaks for the first time posthumously. We aren’t entirely sure how this series will interact with the Sacred Timeline, but thankfully it drops today so we don’t have to wait to find out.

If you, like me, are a huge fam of Kim’s Convenience and therefore believe that Jung and Appa’s story was cut short by the show not getting its 6th and final season, you will be delighted to hear that Simu Liu stars in Shang-Chi and the Legend of the Ten Rings, due September 3, 2021. What is this, you ask? WELL. Shang-Chi was originally the son of Fu Manchu — yes, he of the iconic and highly racialized facial hair. However, because Disney does not have the rights to the Fu Manchu character, we are not sure whose son Shang-Chi will end up being. What we do know is that he will battle the infamous Ten Rings crime league and on the way will introduce us to more Marvel characters, as well as continue the “Simu Liu is shirtless” gag from Kim’s Convenience.

The Eternals are the proto-human product of experiments conducted by the Celestials, some of the oldest beings in the MCU. Eternals will center around Sersi (Gemma Chan), an Eternal with an array of superpowers and a soft spot for humans. The trailers are appropriately vague about why the Eternals are only now interfering with humanity now, after thousands of years of guiding us on Earth, but with a cast including Angelina Jolie, Kit Harrington, and Kumail Nanjiani, we’re looking forward to learning more in the coming months.

Tom Holland of Lip Sync Battle fame returns to the MCU in his third solo Spider-man movie. As we get further into Phase 4, information will become less specific and speculation will run rampant. What we do know is that Benedict Cumberbatch joined the film in October 2020, starting rumors that there will be multiple timelines of Spidey in this film. Alfred Molina was spotted on set and has confirmed his role as Doc Octopus, and both Tobey Maguire and Andrew Garfield have been rumored to be in talks. What we do know is that Spider-man’s existence in the MCU has always been a bit of a question; I predict we will get some answers — and more questions — in the coming months.

The second series in this list finds the original MCU Hawkeye, Clint Barton (Jeremy Renner), training a new Hawkeye, Kate Bishop (Hailee Steinfeld). Florence Pugh is rumored to reprise her role as Yelena Belova, whose mission is to eliminate Clint. This series will explore Barton’s experience during the Snap, as he trains Bishop to be the new archer of the Avengers. Bishop is a Young Avenger, so we may see other members of her generation, as well as some old friends. Filming wrapped in April 2021, so with luck we’ll start to get some answers soon.

Lizzo voice: I been waitin’ for this one!

Ms. Marvel — distinct and separate from Captain Marvel — stars Iman Vellani in the title role. The Ms. Marvel comics were developed in 2013 by Sana Amanat, Stephen Wacker, G. Willow Wilson, and Adrian Alphona; and feature the first Pakistani-American superhero, whose power is enbiggening herself to fight evil. She is an Inhuman, and the things to watch for are how the MCU will turn around the apparent flop of the Inhumans TV series in 2017–18. Production wrapped in May 2021, so look for trailers in the next couple of months.

Does 2022 sound far, far away to anyone else, or is it just me? The second Dr. Strange movie will feature our favorite TV Sherlock Holmes, Benedict Cumberbatch, re-joined by Wong (Benedict Wong) and Dr. Christine Palmer (Rachel McAdams), and introducing America Chavez (Xochitl Gomez). This last addition further strengthens the suggestion that reality-hopping will be key in Phase 4 and beyond, as that is Chavez’s major ability. Filming has not yet started for this one, but we are looking forward to seeing what Sam Raimi’s distinctive style does for a “slightly scarier” MCU film than we’re used to.

If you asked me to name my favorite MCU movie of all time, I wouldn’t be able to. But if you asked me to tell you which movie I’ve seen the most, it would be a close showdown between Thor: Ragnarok and Captain America: The Winter Soldier; which one I choose depends on my mood. The fourth Thor movie sees the return of Thor Odinson, although now that production has wrapped, it looks like Natalie Portman will be playing the Mighty Thor and just typing it puts a giant smile on my face. Almost all our favorites return, including Valkyrie (Tessa Thompson) as the King of Asgard looking for a queen (may we suggest Janelle Monae?). Also returning are Matt Damon as Actor Loki, Sam Neill as Actor Odin, and possibly best of all, Luke Hemsworth as Actor Thor — and they are joined by Melissa McCarthy as Actor Hela. The return of director Taika Waititi ensures that it’ll be quirky and hilarious.

That puts a lid on of new Marvel movies in Phase 4 for the MCU. Phase 5 brings more of our favorites back to the screen; Jameela Jamil revealed that she will play She-Hulk, while Ryan Coogler is directing a Wakanda-set TV series. There is an as-yet-unnamed Okoye series coming and of course, Black Panther: Wakanda Forever, currently set for July 2022. We’ll get more Deadpool and another Captain America movie, plus a Moon Knight and an Ironheart series.

With decades of comics to translate into film or TV and all of the time-hopping, reality-shifting, and world-building available in the Marvel Universe, one thing is completely clear: Disney and Marvel have a lot of stories left to tell.