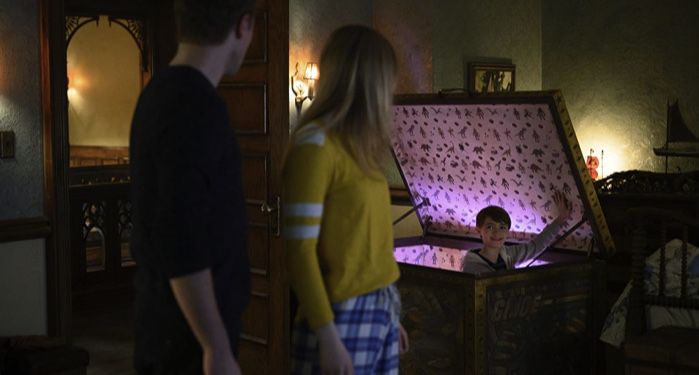 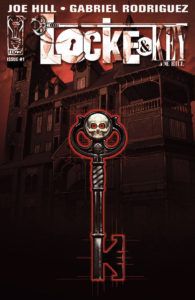 The first issue of Locke & Key’s original 37 book run was released in February 2008. Written by Joe Hill and illustrated by Gabriel Rodriguez and Jay Fotos, with lettering by Robbie Robbins, the story of Key House and its inhabitants would continue on a monthly basis (excluding hiatuses between acts) until December of 2013.

Also part of the universe are 2011’s Guide to the Known Keys (containing an expanded version of the titular story, the “Guide to the Failed Keys,” and the original story “Open the Moon”) and Small World (a Key House monster story). Still to come are In Pale Battalions Go #1–3 (set in and around Key House during the early 20th century and featuring characters from “Open the Moon” and Small World) and Hell and Gone, a crossover with the Sandman Universe books (no word on whether or not Vertigo’s shutdown has affected this last).

Locke & Key was published by IDW.

When Bode, Kinsey, and Tyler’s father is murdered by a student, they and their mother move to his ancestral home, Key House, in Lovecraft, Massachusetts (much like Blüdhaven, I wonder exactly what a town named Lovecraft might offer to convince people to relocate there willingly). When the family arrives, they find an old mansion full of strange doors and echoing outbuildings. As if being the new kids with a tragic backstory isn’t difficult enough, youngest Locke sibling Bode complicates everyone’s lives further when he starts telling his teachers and classmates about a special door that, when opened with a magical key, lets him become a ghost and wander around the house. And then there’s the matter of the echo in the well who talks back and goes by the name of Dodge.

As it happens, the magical key is quite real and there’s more than one of them hidden in Key House, just as there’s more than one magical door. The entity known as Dodge wants the keys so they can control the magic. To get the keys, however, they need the remaining Lockes out of the way and, because Reasons, can’t lay hands on them. So Dodge strikes a (Faustian, of course) deal with Mr. Locke’s murderer, Sam; they help him escape from prison and promise access to great power in exchange for Sam traveling cross country to Massachusetts and getting rid of the remaining Lockes.

The Lockes make it out alive. Barely. Sam’s deal with a devil goes…exactly as such things usually do. Dodge escapes using one of the keys.

The first season of Netflix’s Locke & Key adaptation is a relatively literal one with some edits and a few additions I’m assuming were necessary for TV narrative flow (they may also be advanced from later issues of the comics. I’ve only read the first trade thus far) and Hill found acceptable as an executive producer and co-author of the pilot episode (he even has a cameo in one of the later episodes). We start with Rendell Locke’s murder in Seattle and the family’s move to Key House in Massachusetts. Duncan, the younger Locke sibling, does feature in the story though he doesn’t live at Key House with Nina and the kids and his relationship to its magical history is way, way creepier. As in the books, Bodie is the first character to discover the magic of the keys and doors, though he finds more than one of them, and his siblings are much swifter to believe him, join in his search, and use the magic alongside him. Dodge manipulates Bodie in a similar manner as in the comic, recruits Sam, and enters Key House to claim their prize.

All of that said, there are a few notable differences. While the comic is packed with violence and blood spatter, the show generally chooses a suspense route—with the exception of the murder scene and flashbacks to it—rather than a gross-out one, which I, personally, find far more terrifying; I also think it works better for television because no matter how “realistic” blood and guts are, one can maintain a certain amount of distance. Tension, however, is an emotion, and even if its source is fictional, the emotion is very real. The print version of Locke and Key is also extremely white, the only character of color being the police detective who comes to warn Nina Locke that Sam has escaped and is on his way east; the show, whether deliberately or not, is much more representative of the actual population.

There is one entirely new plot line where Kinsey and her new friends are making a horror movie and discover a portal to another dimension in the caves under Key House (the portal figures into the climax of season one). As I said above, I’ve only read the first trade and it may very well be that this is something from later issues that was moved up as is often done for the sake of moving the narrative along properly (see The Expanse) or it may be something that was written new for the show. Either way, I liked it: Kinsey and Nina (AKA the women) are very much side characters to Bodie, Tyler, and even Sam the murderer in the books, used more as devices or tools than being featured as characters. The new arc in the show gave Kinsey a story of her own and fleshed her character out from “sister” to “actual human being with depth and emotions” which is, quite frankly, as it should be.

Even taking the changes into account, I think Locke & Key earns a solid pass as a literal adaptation; none of what was added or subtracted affects the core of Hill’s story in any way and the first season of the show hits all of the same major beats as the first comic. In terms of capturing the mood of the story, I think, in many ways, the show, by capitalizing on suspense over ick factor, actually creates an even more powerful atmosphere of oppressive claustrophobia, oddly innocent wonder, and hold-your-breath-wait-for-the-jump suspense for which the comic was aiming and upon which so much of Hill’s writing relies.

Season 1 (10 episodes) of Locke & Key is streaming on Netflix now. Season 2 has been confirmed by Netflix, though no definite release date has been set.